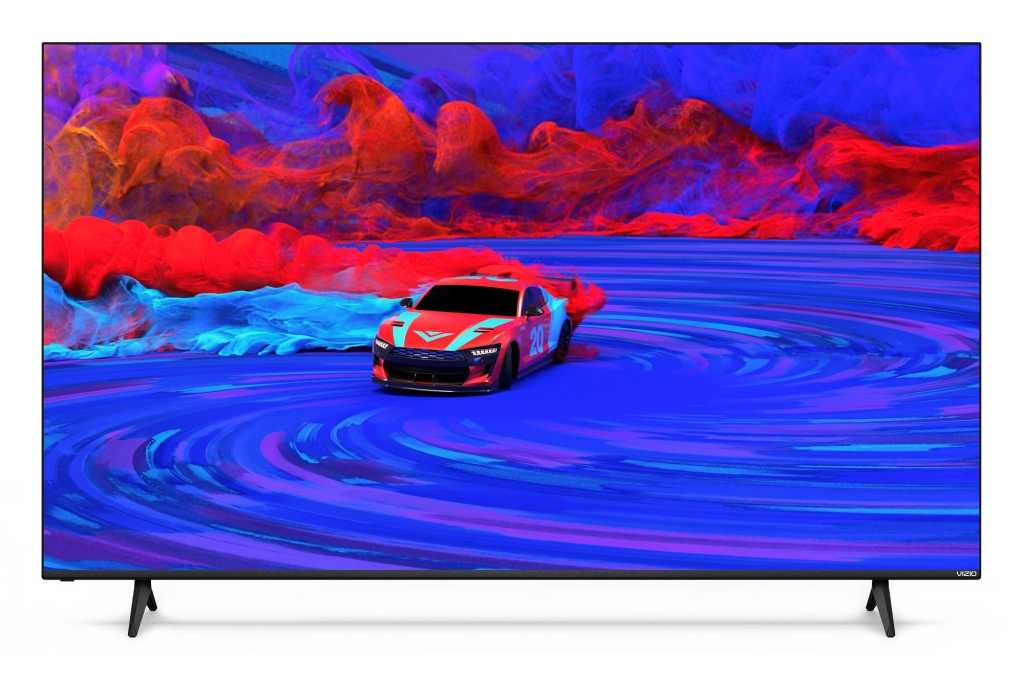 With quantum dot color, the Vizio M-Series outstrips the only slightly cheaper V-Series by a large margin in picture quality. Though little changed since the last iteration, new is eARC and FreeSync is available on select models.

It didn’t take long to confirm what I suspected during my Vizio V5-Series review—the slightly more expensive M-Series Quantum offers a far better picture. It’s not perfect perfect by any means, but the color is more accurate, and the screen uniformity far outstrips that of the V-Series.

If you’re shopping mid-range Vizio, the M-Series Quantum is what you want. Skip a couple of lunches to save up the extra cash.

The M-Series, including the 55-inch class model M55Q6 that I tested, are 60Hz, 3840 x 2160 (4K UHD), 10-bit TVs. They offer array backlighting, but no zone dimming until you hit the MQ7 models (then you get up to 32 zones). Quantum dots are employed for accurate color, and there’s enough peak brightness to breathe life into HDR titles.

The M-Series aren’t the lightest TVs out there, but they do range towards that end of the spectrum. I had no difficulty wrangling the unit out of the box and it was easy to hold in place upside down while I screwed in the two legs. If you’re reasonably able, you’ll have no problem setting it up solo. At 29.39 pounds, it’s also light enough for wall-mounting even without hitting a stud (if you’re careful and use the right hardware). My unit sported a 300mm x 200mm VESA mount point.

The M55Q6 offers a modest, but more than adequate selection of ports, including analog audio and component/composite video. There are three HDMI 2.1 ports with eARC supported on HDMI 1 (older models offered only the slower ARC), as well as FreeSync and variable refresh rate. Optical S/PDIF, coax (for antenna or cable), and ethernet are also onboard. Wi-Fi is 802.11n, and there’s Bluetooth 5.0 support.

Other features include voice-activated remote control and smart-home connectivity via Amazon Alexa, Apple HomeKit, and Google Assistant. This TV understands all the major flavors of HDR, including HDR10, HDR10+, Dolby Vision, and HLG.

The MQ6-series is available in 43- ($400) through 75-inch ($1,000) models. The 55-inch model reviewed here was $580 at the time of this writing. The MQ7-series is available in 70- ($1,200) and 75-inch ($1,400) versions. Those offer slightly more accurate color and higher brightness in addition to local dimming zones. FreeSync Premium (supporting low-latency standard dynamic range) is also a MQ7-series perquisite, although they are still only 60Hz TVs.

Vizio’s SmartCast user interface is a major strength of Vizio’s TVs. It does an excellent job of organizing and delivering all types of content. Indeed, it’s also the only interface I’m aware of that folds all of said content into the channel guide—a feature normally reserved for OTA (over-the-air) and curated content. Speaking of which, Vizio, like other vendors, provides a lot of free material for viewing.

The minimalist (forgetting the advertising shortcut buttons) remote control marries very well with SmartCast. Nearly all settings are a mere two clicks away, and the rocker/enter button handily doubles as transport controls during playback. It’s very well thought out and along with Roku, the tandem I find most efficient. Like Roku’s better remotes, there’s an onboard mic for voice recognition.

If you’re looking for ease of use and easily searchable content, then Vizio should be at the top of your list. My only caveat is that it’s difficult to get through the setup process, let alone use the TV, without an internet connection. Don’t skip the connection setup, and don’t buy one if you want a standalone unit for OTA TV.

Note that there’s a companion SmartCast app for phones. I’ve always found it laggy, but it’s certainly handy if you lose the remote. Phone-centric users might even prefer it. Download it and give it a try.

I had a massive case of déjà vu when I looked at this most recent M-Series. If the picture has changed at all from the 2019 iteration, I couldn’t spot it. What that means in more granular terms is that the color is great, there’s an adequate amount of brightness for showing off HDR content, and the image processing is… meh.

Where the M-Series has trouble is with motion compensation, and for some reason, over-saturated reds in HDR. In the case of the former, Vizio simply doesn’t implement it, and in the case of the latter, it’s likely a matter of processing horsepower. In our Rio video with a giant gold and red dragon in a parade, the gold and red tended to merge into an rather ugly mélange. It was better than the V-Series, but it’s something Vizio should work on.

Shimmer and moiré are noticeable, too, but not overwhelmingly so; and in general, most material and movies are shown to good advantage on the M-Series. It’s not a great image, but it’s nice for the price.

Testing the DLNA/mass-media playback app revealed one Vizio foible I’d forgotten. It doesn’t read exFAT media, only NTFS. Beyond that, Vizio has vastly improved the app over the last couple of years. The interface is still primitive (i.e., DOS-like), but it played all my test videos with nary a hiccup. That’s something Sony’s A90J failed to do in long-term testing.

Having just reviewed the Vizio V5-Series, I can unequivocally recommend that you buy the M-Series instead. Not only is the color much better, but the screen uniformity is vastly superior. Where the V-Series had clouding issues and very narrow off-axis viewing angles, the M-Series had almost no clouding and a decently wide optimal viewing angle.

If you’re looking Vizio, skip the V-Series and go with the M-Series. The difference in picture quality is staggering and the M’s are priced only a little higher ($50 to $100). Beyond that, if you’re not interested in eARC (for uncompressed 7.1 surround) or FreeSync (for gaming), the picture is identical to the last iteration, which you might find deals on.

This article was edited on August 9th, 2021 to correct typos and improve grammar.