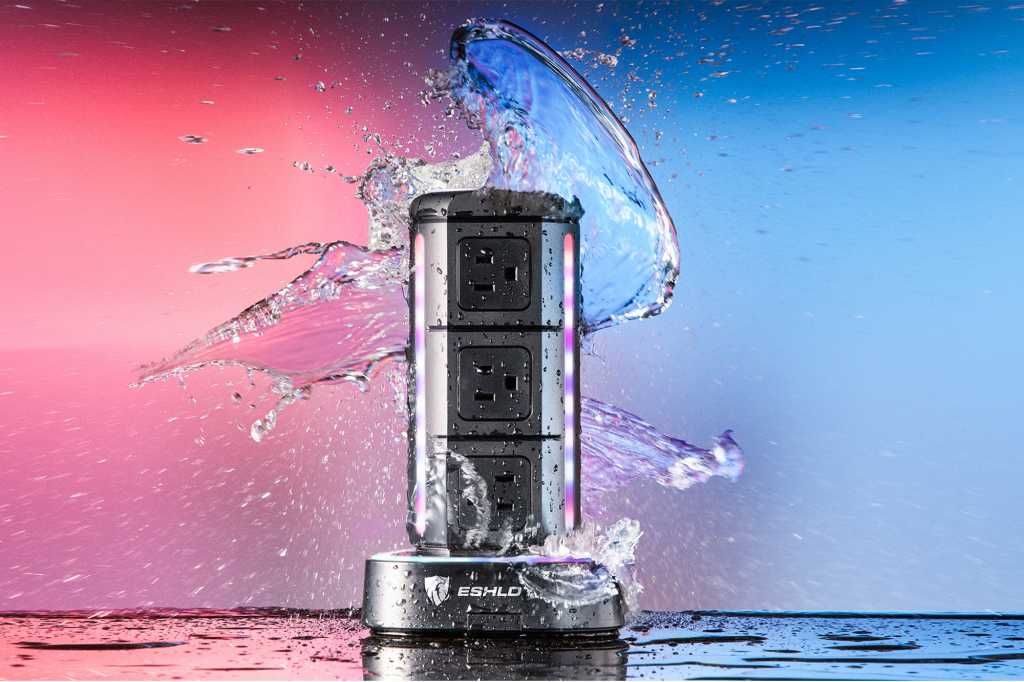 Image: Eshldty
At a Glance

If you find yourself needing to plug in a lot of AC devices, charge your USB-equipped phones and tablets, miss your disco-dancing days, and have your gear occasionally spritzed with water, the Eshldty RGB Power Strip Tower neatly fits all your needs in one surge protector with a bit of a premium in its price. If only some of those features sound of interest, you might want to look elsewhere for a cheaper, but—let’s be honest—far more boring supply of power.

Eshldty clearly has a customer in mind: one who has children or careless friends who are regularly whipping liquid all over everything—or someone living large outside the house. This 9-outlet tower of power has an IPX6 water-resistance rating, which corresponds to exposure to water up to and including “powerful water jets” (you can read all about IP codes in this story).

The power switch, which doubles as a circuit breaker, lives at the bottom of the tower under a plastic membrane. We don’t recommend you use electricity in such an environment—and we forewent testing its limits in the interests of our safety—but if liquid exposure is a fear, Eshldty has you covered.

The marketing materials for the power tower state that the AC outlets are also designed to pass current only when standard U.S. plug blades are put inside, making it “shockproof” (the firm’s words) as fingers and other objects won’t create a circuit. There’s no certification or testing report provided for this, however. Same goes for the IP water-resistance status (which is not unusual).

The company apparently also expects that you and said children or friends might also enjoy colored lights emanating from LED-lit translucent strips all over a tower-style power supply. The surge protector has a tap switch on its top, a large circle that lights up, too, which lets you cycle through colors or, by pressing lightly for a few seconds, disables the LEDs altogether. You can also move into a mode where the tower throbs with music by apparently sensing bass beats.

If we look beyond the surface features that try to justify the price, this Eshldty unit has great specs. It organizes AC outlets into a stack of three on each of its triangular sides, oriented with the blades parallel to the floor—but the top two outlets point 90 degrees in one direction, and the bottom one 90 degrees in the other. This allows for better and denser placement of plugs.

The tower includes four USB ports. The three USB-A ports can deliver up to a total of 15 watts (3 amps at 5 volts) altogether or through a single port, while one USB-C port can push out up to 20W—enough to charge some smaller laptops or trickle-charge larger ones. (When USB Type-A and USB-C devices are both plugged in, the maximum output apparently drops to 12W on USB-C, but the company doesn’t provide exact specs.) A slide out plastic stand allows a phone to sit in position while charging, although if AC outlets on that side are in use, there’s no room for the phone.

Eshldty wants us to think of this as a portable device, offering a rubberized carrying strap, and featuring a six-foot cord that pivots for placement. The device allows up 1875W (2000 joules) of attached power. Most surge protectors list the maximum voltage that can pass across each of the three legs of a three-wire circuit before clamping goes into effect using metal-oxide varistors (MOVs), but that information is lacking here.

There’s no insurance policy included, but there is a five-year warranty against defects, offering a free replacement if the unit fails under normal use.

One would think Eshldty designed its power tower for gaming parties of the past, given the number of outlets, maximum power, liquid resistance, flashing lights, and portability. Is there a need for such a model today, even when the pandemic risk has passed, with most people either gaming remotely through home rigs or carrying laptops or using gaming systems? Hard to say. But if this unit sounds appealing to you, it’s going to fit the bill in a way no other could.