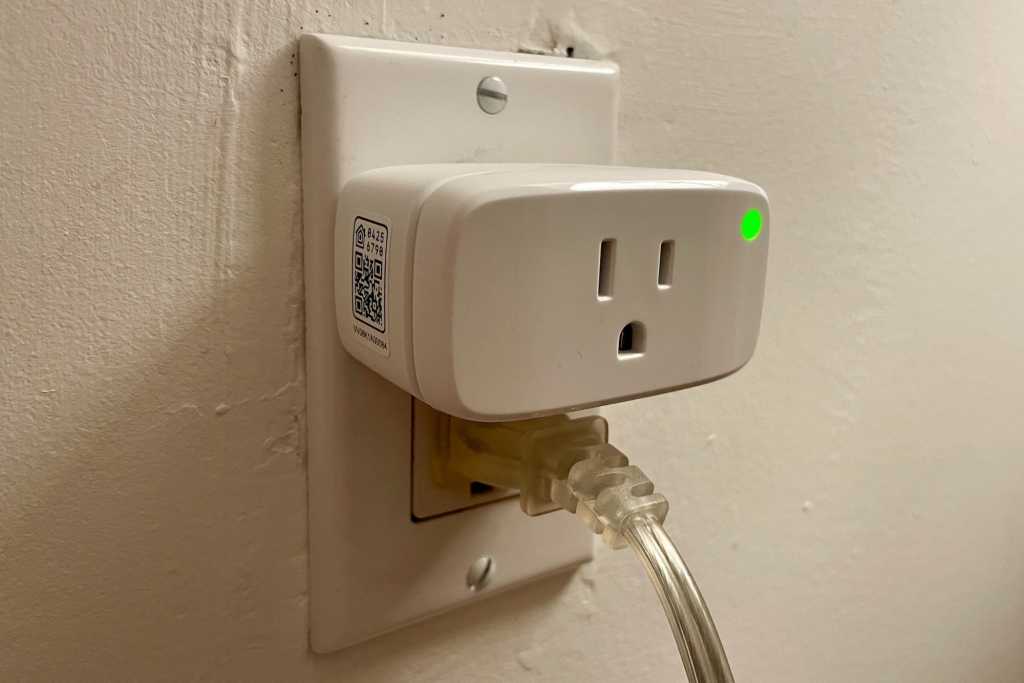 In addition to controlling whatever device is plugged into it, an Eve Energy smart plug can act as a Thread border router, forming a bridge between your Thread network and your primary home network (and from there to the internet). And it does it for a whole lot less money than an iPod mini. On the other hand, it only works with HomeKit.

A compact, HomeKit-compatible smart plug with plenty of automation options along with robust energy-monitoring features, Eve Energy might be pricier than its competitors, but it comes with an ace up its sleeve: support for Thread, an exciting wireless protocol that will—eventually—work hand-in-hand with Matter, the new smart home platform that promises to finally teach Alexa, Google Assistant, and Apple HomeKit to play nice with each other.

Eve Energy checks most of the most important boxes when it comes with energy-monitoring smart plugs, but because it only works with HomeKit (for now, anyway), Android users will need to look elsewhere. The same is true for anyone who depends on Alexa or Google Assistant for smart home control.

Measuring roughly 2.5 x 1.5 x 1.3 inches (WxDxH, not including the prongs), the grounded Eve Energy plug is relatively compact compared to its competitors; while it is a tad wide, the plug is short enough to leave the second socket of a two-outlet plate free. A button in the top right-hand corner of the Eve Energy’s face lets you toggle the plug’s power manually, and the button lights up green when the plug is energized.

Eve Energy is rated to deliver 15 amps and 1,800 watts, which makes it suitable for lights, fans, humidifiers, and similar small appliances. It might also work with an air conditioner, but be sure to check that device’s power requirements first; if the A/C unit has a power draw greater than 15 amps, don’t try it (and besides, you might be better off with a smart air conditioner controller).

Unlike the Eve Energy Strip, the HomeKit-enabled Eve Energy doesn’t connect to Wi-Fi networks. Instead, it works with Bluetooth or Thread, a low-power, low-latency wireless protocol for smart home devices that’s been gaining momentum in recent months following a slow start.

Eve Energy is also a Thread router, which means that it can extend a Thread network by connecting nearby Thread devices (including other Thread routers, such as Nanoleaf’s Essentials lights, and Thread endpoints, including Eve Door & WindowRemove non-product link) to each other.

Thread has the potential to be one of the more exciting smart home developments we’ve seen in recent years, particularly since it’s a pillar of Matter, a new smart home standard that promises to—eventually—unite the Alexa, Google Assistant, and Apple HomeKit ecosystems.

Enticing stuff, no doubt, but Matter won’t truly materialize until the end of 2021, when the first Matter-enabled devices are expected to ship. So until Eve Energy starts working with Matter, the plug will only support HomeKit, not Alexa or Google Assistant.

If you’d rather skip Thread connectivity (which might be temping if you’d rather not lay down $179 for an Apple TV 4K or $99 for a HomePod mini), you could always just stick with Bluetooth control. However, you’ll still need a HomeKit home hub device—meaning an Apple TV, an iPad, or a HomePod mini—for out-of-home control. (Even without a Thread border router like the HomePod mini, Eve Energy can still connect to a non-Thread home hub, such as a first-gen Apple TV 4K, via Bluetooth, provided it’s in Bluetooth range.)

I decided to use Eve Energy to control a small Vornado fan in our basement, where there happen to be a variety of other Thread-enabled devices, including a HomePod mini (which, as I previously mentioned, is a Thread border router), and a pair of Nanoleaf Essentials lights, which are both Thread routers (but not border routers). Upstairs, I’m testing an Eve door sensor that’s a Thread endpoint.

The actual setup was simple and painless. I plugged Eve Energy into a power socket, plugged my Vornado fan into the Eve Energy, and then used the Eve app to add the plug, which you can do by scanning the embedded QR code. As with other Eve smart products, you don’t need to create an Eve account or otherwise register your email address, which is a refreshing change of pace. 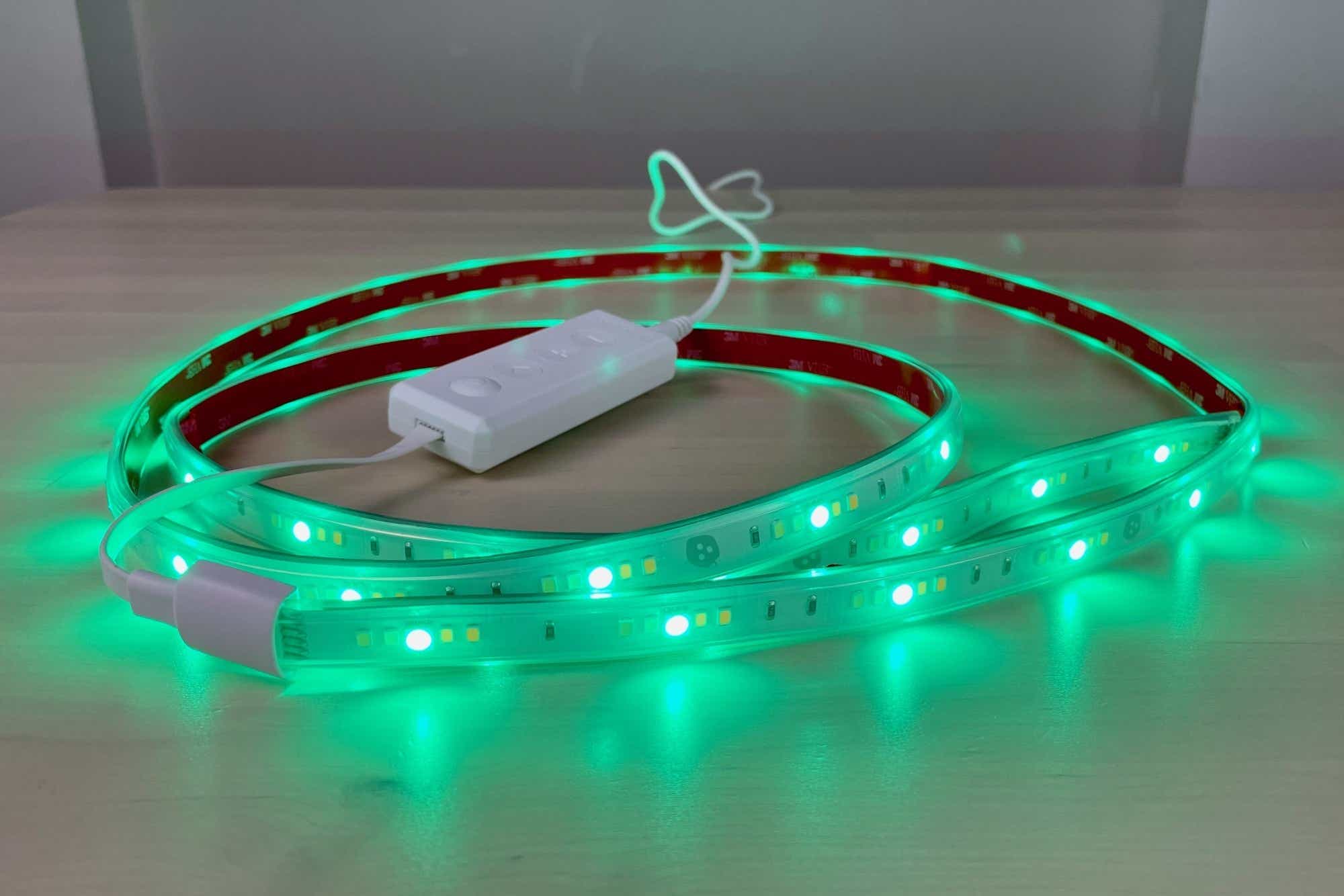 Once you’ve added Eve Energy to the Eve app, you can add it to a room in your home (“Downstairs,” in my case). That action is automatically reflected in the Apple Home app, and by the same token, all your HomeKit-compatible smart devices will appear in the Eve app as well as in Home.

One of the niftiest features of Eve Energy is the ability to set schedules that sit on the device itself, meaning that the plug can follow schedules independently of an iPhone, a home hub, or even an internet connection.

You can create both daily and weekly schedules triggered either by set times or by sunrise or sunset, and you can create multiple “programs” with different repeating schedules. You can also control Eve Energy using an automation in the HomeKit app, although that will require an active home hub connection.

You can also add rules that turn the plug on or off according to a variety of triggers. For example, you could set the plug to turn on when a door sensor gets tripped, when a light gets turned on, when a weather station detects temperatures above a certain level, or when you arrive home. Another option would be to add the plug to a scene (which might include, say, turning certain lights on or off), which in turn could be triggered by a condition (such as a time, an event, or a voice command, like “Hey Siri, I’m home.”) 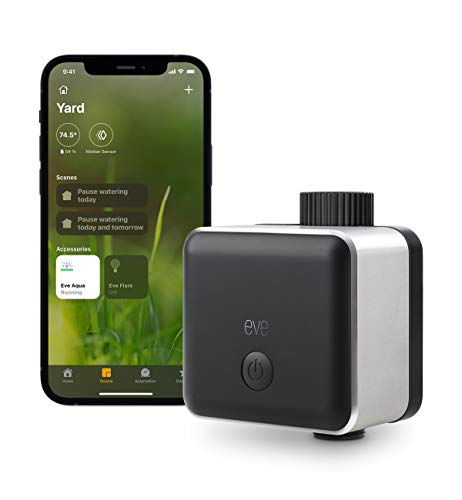 Unlike Apple’s opaque Home app, the Eve app shows you what’s going on under the hood of your Thread network. Not only will it report that the Eve Energy is a Thread device that functions as a router, it will also show you the other Thread-enabled products in your household, as well as their current status. For example, I was able to see that my Eve door sensor, which is a Thread endpoint, was connected to one of my Thread-equipped Nanoleaf smart bulbs (the Eve Energy was too far away to help with the door sensor), while my Nanoleaf Essentials light strip was acting as a “leader” for the other Thread routers in my home. You can also see the quality of the Thread traffic going into and out of your various Thread devices, which could come in handy if you’re troubleshooting spotty Thread conections.

The Eve app does a thorough job of monitoring the Eve Energy’s power consumption. Besides displaying its current amperage and voltage, the Eve app can display the plug’s power use in an hourly, daily, weekly, or monthly bar chart. The app can also break down your estimated power spending over the past days, weeks, and months, based on the average electricity rate in your region; you can also plug in a personalized energy rate from your power bill. Finally, the app projects how much the plug’s energy use may cost you over the course of a year based on your historical usage.

As it stands, the Thread-enabled Eve Energy is one of the most feature-rich smart plugs we’ve tested, and it will be even more enticing once the Thread ecosystem matures and the smart-home- platform-unifying Matter finally arrives on the scene (assuming the plug gets Matter-certified). Until then, however, Eve Energy will only appeal to Apple users, and even then it comes saddled with a lofty price tag.

Updated on June 2, 2021 to note that you can control Eve Energy outside your home with a non-Thread home hub, including an iPad or a first-gen Apple TV 4K.