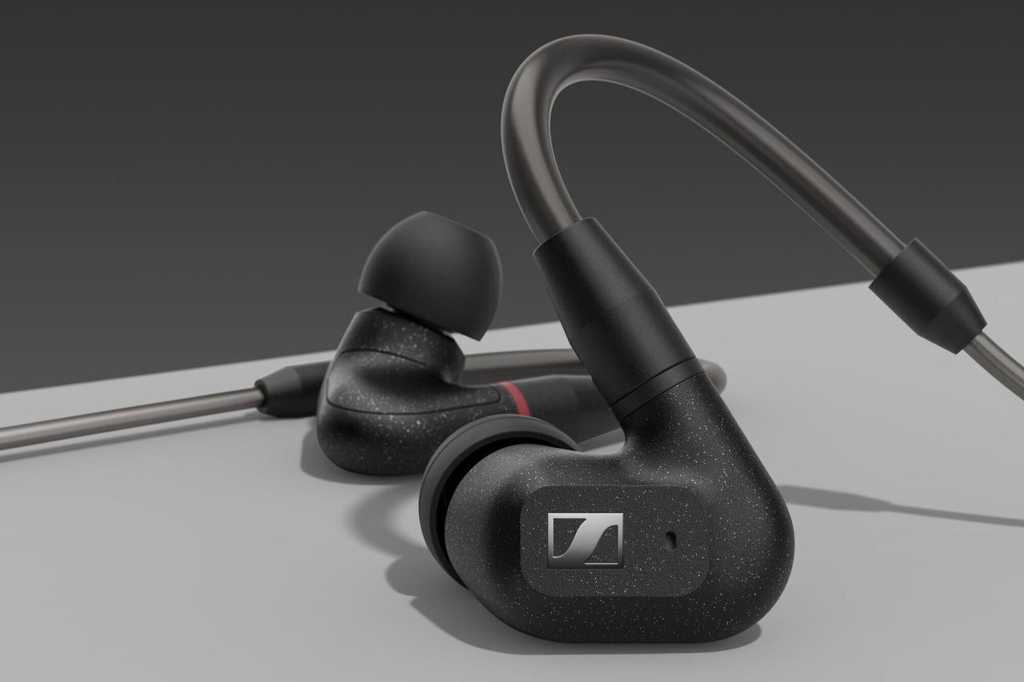 This is the best in-ear headphone I’ve ever heard, with superb sound and no drawbacks—though that quality comes at a relatively steep price.

I greatly admire Sennheiser headphones—I’ve had a classic on-ear HD 414 SL in my recording studio for 40 years. These days, the company also makes in-ear headphones (IEHs), including the IE 300, which was introduced at CES 2021.

When I learned about the IE 300 last January, I was excited to check it out. Now that I have, I can say it’s the best in-ear headphone I’ve ever heard.

This review is part of TechHive’s coverage of the best headphones, where you’ll find reviews of the competition’s offerings, plus a buyer’s guide to the features you should consider when shopping for this type of product. If you’re looking coverage of noise-cancelling headphones, we have that too.

The IE 300 is definitely aimed at audiophiles—there’s no Bluetooth, noise cancellation, or microphones for phone calls; just a 4-foot, unbalanced cable terminating in a 3.5mm stereo plug. That cable is detachable from each earpiece thanks to a gold-plated Fidelity+ MMCX connector, which is seated in a recessed socket for additional strain relief. A detachable cable means you can swap it out for a balanced cable if you wish, and the company will soon offer such cables with 2.5- or 4.4mm connectors as optional accessories for $149.95.

This IEH features a refined version of Sennheiser’s 7mm Extra Wide Band (XWB) dynamic transducer, with an optimized membrane foil that minimizes natural resonances and total harmonic distortion, which is specified to be less than 0.08% at 1kHz/94dB. In addition, the space behind the transducer is designed to minimize reflections within the housing, and a resonator chamber in front of the transducer reduces masking resonances in the ear canal.

The end result is a frequency response from 6Hz to 20kHz (no tolerance given). Other specs include a nominal impedance of 16 ohms, which is plenty low enough for portable devices to easily drive it. The maximum sound pressure level is specified to be 124dB SPL (1kHz/1Vrms), but I strongly advise against playing music that loud; it will damage your hearing in only a few minutes.

Like virtually all IEHs, the IE 300 comes with several sizes of silicone and memory-foam eartips, which is important because using the right size for your ears is crucial for getting the best sound from any IEH as well as maximizing noise isolation. In addition, each earpiece has an individually adjustable ear hook for stability, and the included cable is reinforced with para-aramid that can withstand thousands of bend cycles.

I began by trying the largest included eartips, both silicone and memory-foam. I have relatively large ear canals, so I need large eartips to achieve a good seal. The largest eartips that come with the IE 300 are about 13mm in diameter, and both types worked fairly well at sealing my ear canals—in fact, they fit me better than the tips included with most IEHs I’ve tried.

The memory-foam tips are a bit firmer than others I’ve tried, which is a good thing. But it took some fussing to properly seat them in my ears. I ended up using 14.5mm eartips from 1More, which always work great for me.

I played all evaluation tracks for this review from Qobuz’s high-res library using my iPhone XS and an iFi hip-dac. I really like that Qobuz reveals the resolution of each track, unlike Tidal.

One of the first things I came across was Frank Zappa’s 1969 album Hot Rats in 24/192 resolution. It makes no sense to digitize an analog recording from more than 50 years ago at a resolution that high, but there it is. Plus, the album has one of my all-time favorite Zappa tunes, “Peaches en Regalia,” which a friend in high school transcribed from the record and arranged for our big band. It was difficult to play, but really fun!

On the IE 300, the sound was super clean, and I could distinguish each instrument quite clearly thanks to excellent imaging. The bass is mixed somewhat low, but that’s in the recording, not in the reproduction by the IEH.

Next up was “A Higher Place” by Tom Petty on his posthumously released album Finding Wildflowers (Alternate Versions), which sports a resolution of 24/96. The sound on the IE 300 was clean, smooth, full-bodied, and well-balanced with great imaging. In particular, Petty’s vocal was excellent and entirely natural.

Stephen Colbert’s bandleader, Jon Batiste, released the wonderful album We Are last year at 24/44.1. I listened to “Adulthood,” in which the acoustic bass is quite prominent. The IE 300 sounded clean and clear with rich, authentic bass and natural vocals. The sharp backbeat (it might be rim shots, but I’m not sure) was super crisp, and the brass band at the end was beautiful.

For some African jazz, I cued up “Eretseretse” by Omar Sosa from his album An East African Journey at 24/96. This track starts with slow piano and a fast plucked African stringed instrument (I wish the liner notes identified it) with some very interesting panning effects in which notes jump back and forth across the soundstage. Later, the beat picks up with drums, bass, and percussion.

Once again, the IE 300 presented a clean, clear, open, well-balanced sound with superb imaging. The piano and plucked string instrument sounded entirely natural and cohesive, as did the other instruments when they joined in.

I love good funk, which Dumpstaphunk delivers in spades. Lead by Ivan and Ian Neville, sons of the legendary brothers Aaron and Art Neville respectively, the group’s third studio album, Where Do We Go From Here at 24/44.1, includes the super-funky, horn-laced “Itchy Boo.” As I had come to expect, the IE 300 sounded clean, full-bodied, and well-balanced with tight bass, natural horns, and great imaging. I fail to see, however, why the recording needed 24 bits, since the dynamic range of the music is quite narrow.

Turning to bluegrass, I cued up “Suzanne” by Mo Pitney from the compilation album Industrial Strength Bluegrass: Southwestern Ohio’s Musical Legacy at 24/96. Once again, the IE 300 sounded clean, clear, open, and well-balanced from bass to banjo with great imaging and entirely natural-sounding tight vocal harmonies.

Moving on to chamber music, I listened to “Gagliarda del Principe de Venosa” by Carlo Gesualdo, one of my favorite renaissance composers, as performed by Les Récréations on the album Scarlatti Sonate a Quattro at 24/96. The ensemble includes two violins, one viola, and one cello that are joined by a lute for this selection. I could easily distinguish each instrument clearly on the IE 300, which produced a delicate, well-balanced, open sound.

For something bigger, I cued up the fourth movement of Bruckner’s Symphony No. 3 in D minor, WAB103, as recorded by the Wiener Philharmoniker under the direction of Christian Thielemann at 24/96. As expected by now, the IE 300 sounded beautiful—a clean, clear, well-balanced, full sound with excellent imaging and dynamic range. I could easily hear each section and solo instrument within a completely cohesive whole.

The best IEH I had on hand during this review is the 1More Quad Driver ($169.99), which I reviewed for TechHive along with the Dual and Triple Driver models. I listened to each evaluation track on both to see how they compared. 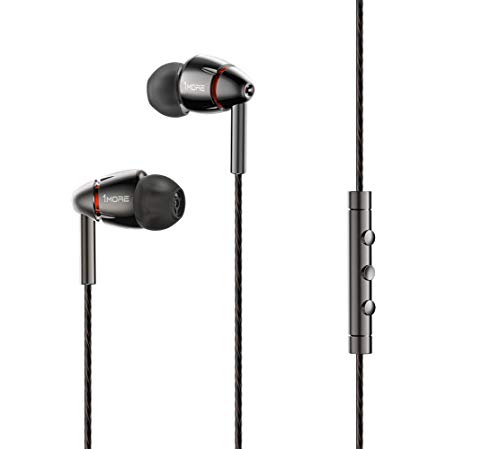 The Quad Driver sounded very similar to the IE 300—my notes sometimes say “virtually identical.” But there were some subtle differences. In most cases, the Quad Driver sounded just a tad thinner with a skosh more bass. The only exception was during Jon Batiste’s “Adulthood,” in which the bass was much more prominent and even a bit overbearing. On a couple of tracks, such as Dumpstaphunk’s “Itchy Boo,” the bass was a bit more diffuse and less well-defined, while the Gesualdo chamber music sounded just slightly warmer.

With the exception of the bass on “Adulthood,” all these differences were extremely minor, but the IE 300 never once gave me anything but stellar sound.

I’ve got nothing but high praise for the Sennheiser IE 300. As long as it’s used with the right eartips for your ears, it delivers clean, clear, open, full-bodied sound with superb imaging, and the balance between bass, midrange, and treble is nigh on perfect. Even better, the adjustable ear hooks keep them securely in place, and the detachable cable lets you upgrade to a balanced connection if you wish.

At just under $300, the IE 300 ain’t cheap; it’s almost twice as much as the 1More Quad Driver, which performs almost as well overall. But as with most high-end audio, you often must spend significantly more to get slightly better performance. Is it worth the extra dough in this case? If you can afford it, I say absolutely!