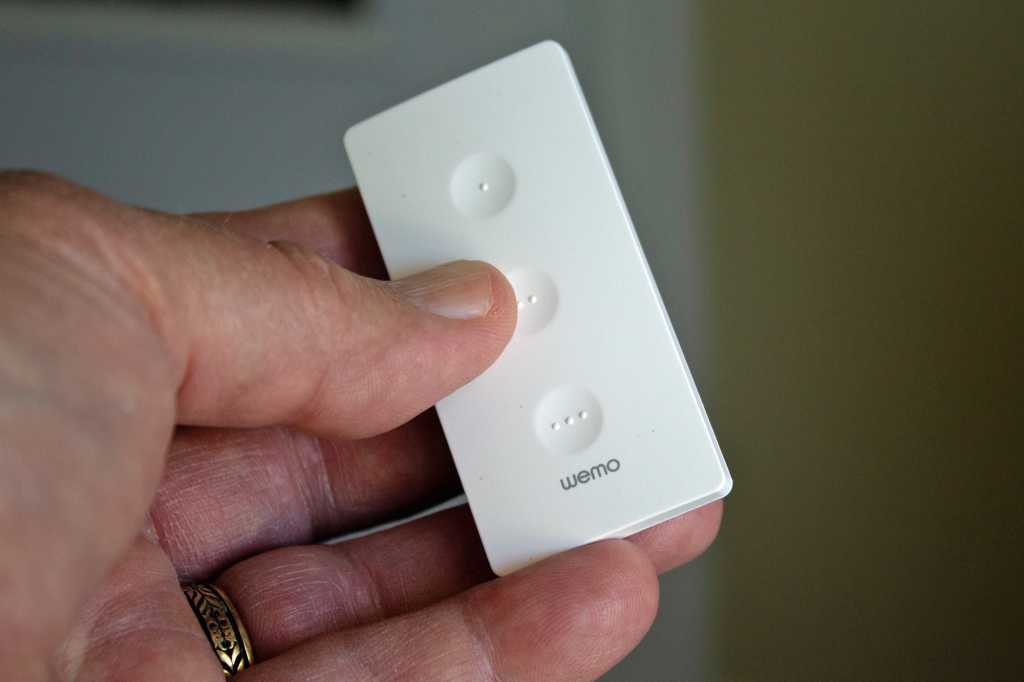 The Wemo Stage Scene Controller is a well-executed smart home device for hard-core HomeKit users, but it’s expensive and its current reliance on Bluetooth LE limits its range. It will a better product when it gains Thread compatibility.

Most of the products in Belkin’s Wemo line of smart lighting products are platform agnostic. They operate on your home’s Wi-Fi network and can be controlled with either Android or iOS devices. The Wemo Stage Scene Controller is not. It’s a powerful remote control designed exclusively for smart homes based on Apple’s HomeKit platform. If you’re deep into Apple’s ecosystem, you’ll dig it. If you’re not, it will be useless to you.

Updated January 27, 2022 to report that a new firmware release has added Thread support to the Wemo Stage Scene Controller. The new firmware also enables users to create three additional HomeKit scenes, for a total of nine. In light of that, we have bumped our score from 3.5 to 4 stars.

At launch, the Wemo Stage was only “Thread ready,” meaning a firmware update would enable it to operate on a Thread network instead, where it will function as a Thread endpoint. The remote’s earlier dependence on Bluetooth LE presented a significant range issue that can be alleviated only by having multiple home hubs sprinkled around your home.

Why Thread support is needed

I have a HomePod mini in my kitchen and an Apple TV HD in my home theater, but these didn’t provide enough coverage to let me use the remote in every room of my 2,800-square foot home. I didn’t need to be within site of one or the other device, but having more than a couple of walls between the remote and a home hub was enough to block the remote’s commands.

The Wemo Stage has three buttons, each of which has raised dots to help you identify which is which without needing to look at the remote. It can perform up to six actions, because each button can distinguish between a short press and a long press.

In reality, however, you’ll likely program it to toggle three scenes, groups, or devices on and three off. The remote is programmed through the Apple Home app, so there’s no other software to install or learn.

If you wanted to turn one or a group of lights on and off, you could use a short press on button one to turn them on, and a long press of the same button to turn them off. You can also create more elaborate scenes in the Home app and trigger them on and off the same way. For example, you could create a “movie time” scene that closes your blinds, dims your lights, and turns on your TV and media streamer with a short press. A long press could then open your shades, turn the lights to full brightness (or off), and turn your TV off. All six of the button actions can be turned into Siri Shortcuts, and from there, into Siri voice commands.

You’ll encounter this remote’s biggest flaw if you try to create a scene that involves playing music and you don’t subscribe Apple Music. I don’t, and when I tried to create automation that would—among other things—play music on one of my AirPlay 2-compatible Sonos speakers, I was presented with an error message that said “Adding audio to a scene requires that you have an active Apple Music membership.” I got the same message when I switched the audio device to the HomePod mini.

This isn’t Belkin’s fault, of course, but I can see no good reason why I would need to subscribe to Apple Music to create an automation that involves audio playback, especially if I wanted to play music that I own. This limitation seriously undermines the Wemo Stage’s usefulness.

I quizzed Belkin about this issue and they replied “Our team hasn’t experienced this issue in the Apple Home app before but we are looking into it.” I’m guessing that’s probably because everyone on the Wemo team has an Apple Music subscription, but I’ll update this review when I receive additional information.

The Wemo Stage is powered by a single CR2032 coin cell battery, which Belkin says should last about two years, depending on use. The 2.6 x 1.3 x .35-inch (HxWxD) remote can be used as a handheld device or magnetically docked to trim plate, which you can mount on the wall using the included adhesive pads. Or if you prefer, the dock can be separated from the trim plate and mounted in a conventional junction box. You can then reattach the trim plate or use any other plate designed for paddle-style switches (this option is particularly handy if you want to mount it in a box alongside conventional switches and dimmers).

I’ve become increasingly impressed with HomeKit as I’ve dug deeper into it. It doesn’t fit well with my Vivint smart home system, which is largely based on Z-Wave devices, and I rely mostly on Amazon Echo smart speakers to control my smart home products, but HomeKit offers an increasingly robust ecosystem that puts a premium on personal privacy. I also like that many HomeKit devices don’t need their own apps taking up storage on my iPhone and iPad.

This Apple Music requirement, however, is a serious sore spot for me. And the Wemo Stage itself will be much more useful when it becomes Thread enabled, because HomePod minis are just too expensive to sprinkle all over the house. Apple could learn a big lesson from Amazon and Google on that front if it wants HomeKit to become ubiquitous.

Speaking of price, $50 for a three-button remote control is pretty rich, no matter how many scenes it can control. You can buy an entire smart speaker for that price, though it wouldn’t be compatible with HomeKit. The more excited you are about having a HomeKit-based smart home, of course, the less of a barrier that price tag will present.