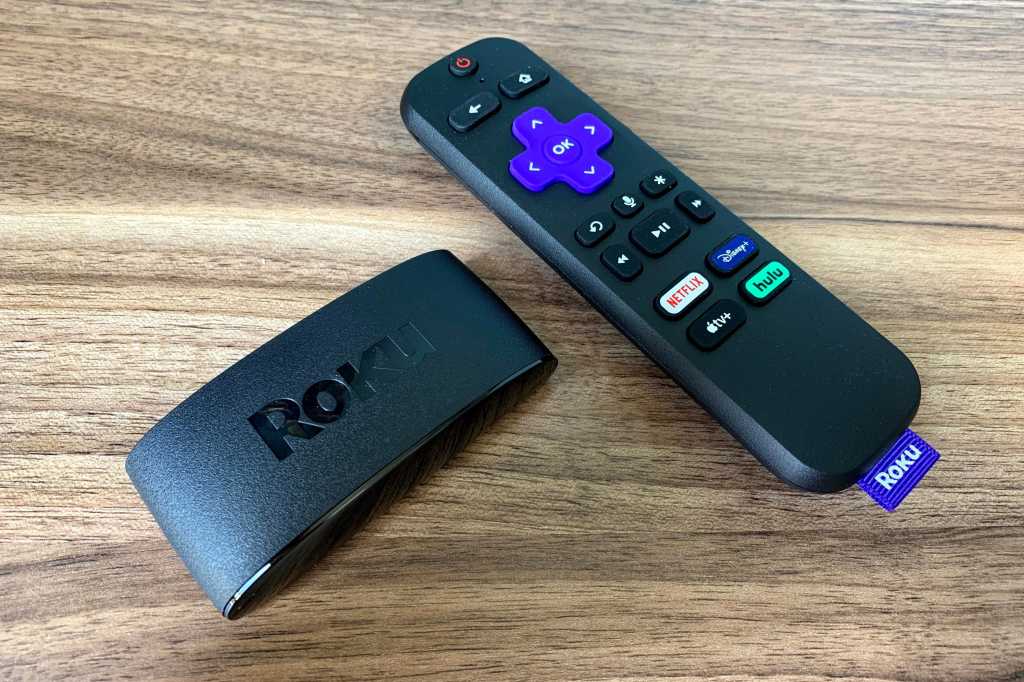 Before the Roku Express 4K+ arrived, my advice to prospective Roku buyers was to avoid the company’s $40-and-under streaming players. Those players—including the Express and Premiere—came with outdated remotes that offered no voice input, no TV volume or power controls, and clunky infrared-based connectivity.

The Roku Express 4K+ doesn’t make the same mistakes. It includes a point-anywhere remote with voice, volume, and power controls, plus it includes dual-band 802.11ac for faster connectivity to newer wireless routers. At $40, it undercuts Amazon’s Fire TV Stick 4K and the Chromecast with Google TV by $10 without major compromises.

That doesn’t mean you should rule out other options. The Roku Express 4K+ lacks Dolby Vision HDR support, and Wi-Fi performance could be better despite the dual-band upgrade. I also wish Roku offered some kind of universal guide to help users make sense of streaming, and that it fought less often with content providers. (See: the current dispute dispute with Google over YouTube TV.) Despite those downsides, the Express 4K+ has a lot to like for less than other 4K streamers.

The Roku Express 4K+ has the same palm-sized design as Roku’s Express and Premiere players. It comes with a two-foot HDMI cable, plus a Micro USB cable and power adapter to plug into a wall outlet or your TV’s USB port. Since the device is so light, Roku also throws in an adhesive strip for sticking the box to your entertainment center.

While the Express 4K+ is faster than the Premiere that it’s replacing, the biggest change is in the remote control. During setup, Roku automatically detects your TV type, allowing the remote’s infrared emitter to control volume and power. Roku’s remote can also adjust the volume on external soundbars or receivers, but only if they’re connected to your TV over HDMI-ARC. (Unlike Amazon’s Fire TV remotes, Roku’s remote can’t control external sound systems over infrared.)

For video support, the Express 4K+ offers up to 4K resolution with HDR10 and HDR10+ support, but it doesn’t support Dolby Vision. That means TVs with HDR10+ can make per-scene changes to color output while playing compatible content, but TVs with only Dolby Vision support cannot. (The lack of Dolby Vision licensing might be one reason Roku’s streamer costs less than Amazon’s Fire TV Stick 4K and the Chromecast with Google TV.) In any case, the Express 4K+ does support Dolby Atmos passthrough for audio, and I was able to enjoy object-based Atmos surround effects on Netflix without issue.

Note that Walmart sells a $35 variant of the Express 4K+, called the Express 4KRemove non-product link, which has the same internal components but no voice or volume controls on its remote. Unless you plan to use it with a separate universal remote, I implore you to spend the extra $5 on the Express 4K+ instead.

Because of these improvements, the Roku Express 4K+ isn’t vastly different from the Roku Streaming Stick+, which sells for $10 more. While the latter’s built-in HDMI plug makes it more portable, it doesn’t support HDR10+, and both devices have nearly identical remote controls and performance.

Still, the Roku Streaming Stick+ provided better Wi-Fi performance in my testing. That’s likely because Roku breaks out the antenna into a separate component on the Streaming Stick+, helping it get better reception.

Those differences may not matter if you have a strong Wi-Fi network, if your router and streaming device are in the same room, or (as Roku now supports third-party Ethernet adapters like this one) if you have a wired connection. But for tricky Wi-Fi situations, consider spending $10 more on the Roku Streaming Stick+ or an even larger streaming box.

The Roku you know

At the risk of sounding like a broken record, software is both the best and most confounding part of the Roku experience today.

Year after year, I hope for Roku to build some kind of universal streaming guide, akin to what’s offered by Apple TV, Fire TV, and the Chromecast with Google TV. Those devices provide recommendations and a watchlist straight from their home screens, so you don’t always have to bounce between apps to see what’s on. Fire TV devices even include a unified channel guide that pulls multiple live streaming sources into a single grid.

Roku doesn’t seem especially interested in aggregation unless the content is free and supported by ads. On the home screen, you’ll find a “Featured Free” section with video from different apps, and searching by genre always brings up a row of free content. The free Roku Channel app, meanwhile, offers a vast catalog of ad-supported movies, shows, and live channels. But if you want to browse across paid services like Netflix, Hulu, or Amazon Prime, you’ll either need to search by genre or navigate one app at a time.

Once you get past the main menu, Roku excels at at finding little ways to make streaming more pleasant. Roku’s mobile app lets you listen to the TV privately through headphones—both wired and wireless—and pressing the star button on the remote gives you easy access to volume leveling and night modes.

The remote also has a dedicated button to rewind with closed captions temporarily enabled, and a recently launched feature can remind you to use your Wi-Fi network’s faster 5 GHz band if it’s available. All this adds up to a platform that feels user-friendly, even if it’s not the most ambitious.

Now that Roku supports Apple’s AirPlay 2 protocol, the Express 4K+ also is the best way to add AirPlay to any TV. If you have an iPhone or iPad, this means you can easily use them to launch videos or music, mirror your mobile device’s display, remotely turn off your TV, or use your Roku as part of a multi-room music setup.

Roku is starting to take voice control more seriously as well. Searching by genre or actor brings up a slick set of results, with separate rows for free content, selections from your subscriptions, subgenres, and more. You can also launch movies or shows directly by voice from lots of video sources—Netflix being a notable exception—and can play music or podcasts from Pandora, TuneIn, or iHeartRadio. It’s just too bad you can’t launch live TV channels by voice in apps like Hulu + Live TV, and that the selection of voice-controlled music apps is so limited.

For hands-free voice control, you can spend an extra $30 on Roku’s Voice Remote Pro, or use either Amazon Alexa or Google Assistant on smart speakers. Just be aware that the latter two methods require clunkier voice commands (“Hey Google, watch Mortal Kombat on HBO Max on Roku”) and are less reliable in my experience.

A word about carriage disputes

Before we render a verdict, Roku’s recent drama with various content providers is worth keeping in mind. Since the start of 2020, we’ve seen AT&T TV removed from the platform (and later re-added), the Fox app nearly pulled ahead of last year’s Super Bowl, HBO Max withheld for six months after launch, and Peacock withheld for two months after launch. Roku is currently in a dispute with Spectrum that’s left the cable company’s app unavailable to subscribers, and a fight with Google has created roadblocks to watching YouTube TV on the platform.

While streaming carriage disputes aren’t unique to Roku—Peacock is still missing from Amazon’s Fire TV platform, for instance—Roku seems to be inviting more of them lately. And regardless of who’s to blame, it’s the customers who suffer the most. That doesn’t mean you should avoid Roku’s platform, but you should be aware that these disputes can happen.

The new all-around Roku to beat

App drama aside, the Roku Express 4K+ is Roku’s most compelling new device in years. Its superior remote makes it a better buy than the $30 Roku Express even without a 4K TV, and it renders the $50 Roku Streaming Stick+ unnecessary unless you need its superior Wi-Fi performance.

The $100 Roku Ultra might be worth considering for Dolby Vision, Bluetooth audio, and USB media support, but even that doesn’t get you Roku’s best remote control. Instead, you can buy the Roku Express 4K+ for $40 and add the Roku Voice Remote Pro for $30, and you’ll get a remote with a rechargeable battery, hands-free voice control, a headphone jack for private listening, and two programmable buttons.

Those who want a more forward-looking interfaces, Dolby Vision support, or tighter integration with Amazon, Google, or Apple services should look to Amazon’s Fire TV Stick 4K, the Chromecast with Google TV, or the Apple TV 4K instead. But if you just want a cheaper option that doesn’t flub any of the basics, the Roku Express 4K+ is the new budget king.