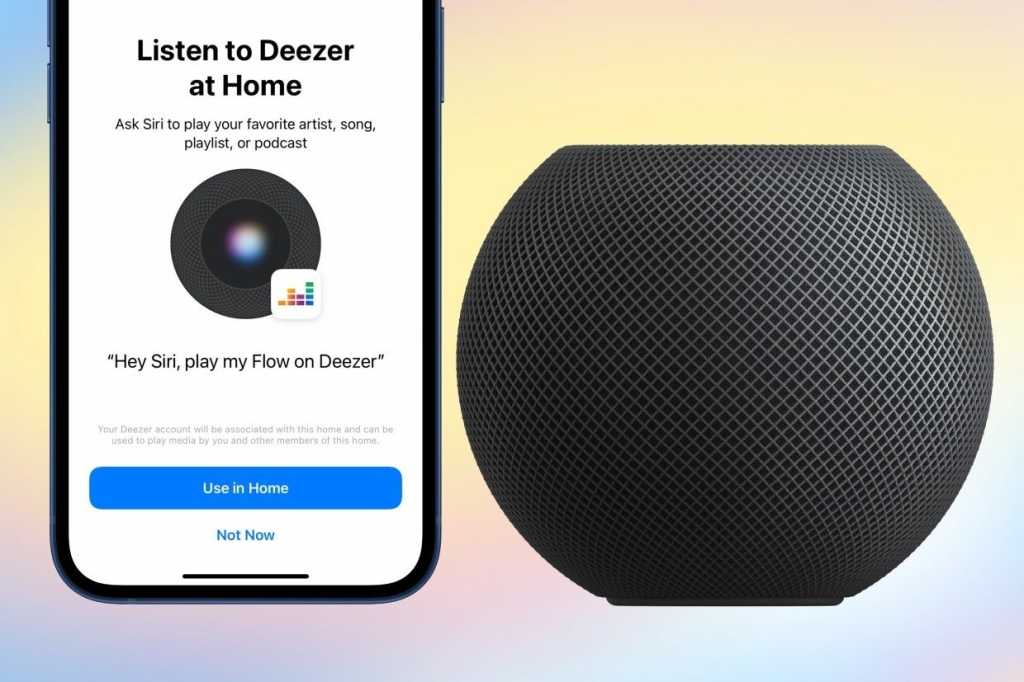 Deezer announced today that it will roll out native streaming support for both the HomePod mini and the now-discontinued HomePod, provided you’re a paying subscriber. You’ll also be able to set Deezer as the default music service on your HomePod speaker.

Once you’ve connected your Deezer account to HomePod, you’ll be able to ask Siri to tee up your favorite tunes on the streaming service. For example, you can ask, “Hey Siri, play ‘Level Up’ on Deezer,” or “Hey Siri, play Taylor Swift on Deezer.” If you set Deezer as your default music service, you’ll be able to drop the “on Deezer” part when you’re chatting with Siri.

Besides dropping the needle on albums, songs, and artists, you’ll be able to ask Siri to fire up your “Flow,” an endless, “personalized soundtrack” of music based on your Deezer listening history. You can also ask Siri to shuffle and repeat tunes, or to like or dislike specific tracks.

In addition to its standard MP3 tracks, Deezer’s CD-quality (16-bit/44.1KHz) “HiFi” music selection will be supported on HomePod and HomePod mini.

Deezer offers more than 73 million streaming music tracks at $10 a month for individuals, $5 a month for students, or $15/month for up to six family members. To streaming CD-quality tunes, you’ll need to pony up for Deezer’s $15-a-month HiFi tier. Deezer also has a free, ad-supported tier, but only paid Deezer users will be able to connect their accounts to HomePod speakers.

To start playing Deezer tracks natively on the HomePod or HomePod mini, you’ll need to launch the Deezer app, go to the Settings screen, then tap Connect to HomePod.

Once that’s done, you can set Deezer as the default music service on your HomePod speaker by navigating to Settings in the Home app and tapping your icon; next, tap Default Service, and pick Deezer.

Apple finally announced last June that it was adding native third-party music streaming support for the HomePod, but it took until fall for a lone music service—Pandora—to sign up.

Now HomePod speaker users have a second music service to choose from, but the biggest players in the music streaming market are still left out, including Spotify, Amazon Music, YouTube Music, Qobuz, and Tidal.