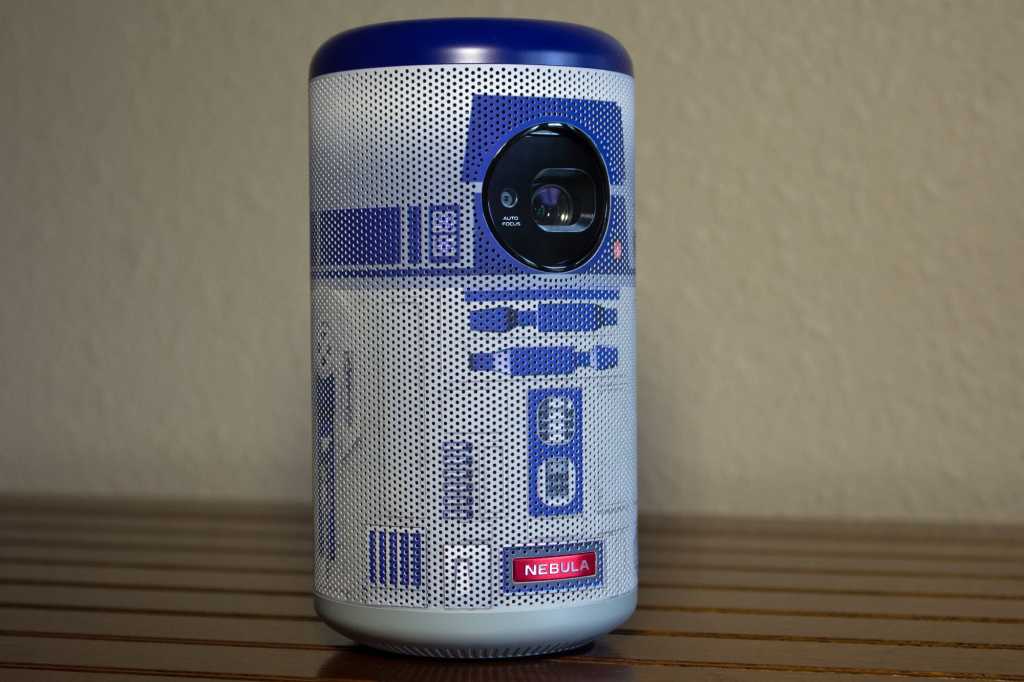 This go-anywhere video projector is a great entertainer, but the Star Wars tie-in pushes its price tag to a galaxy far, far away.

When I heard Anker was coming out with an R2-D2 Limited Edition of its excellent Nebula Capsule II video projector, I hoped it would look exactly like the illustration on its box, but in color. Alas, the color is there, but the R2-D2 treatment is just a paint job on the existing projector, making the $120 upsell over the run-of-the-mill Nebula Capsule II—$700 versus $580—a little hard to swallow.

Apart from the paint design, the only other feature that informs you this is a Star Wars-inspired home-theater device is the beep-beep-boop sound the projector makes when first powered up. Yes, it sounds exactly like the loveable droid, but that’s the only time you’ll hear it.

The Nebula Capsule II is quite powerful for its size, especially when you consider that it’s completely self-contained, with Android TV 9.0; Google Assistant; Chromecast; a self-amplified, 8-watt speaker; and a Wi-Fi adapter onboard. It can run on AC or battery power (up to 2.5 hours in the latter instance), and its DLP engine delivers up to a 100-inch image in 720p resolution with a respectable brightness of 200 lumens. The only thing you’ll need to provide is a projection surface. You’ll want something white and non-reflective for that: a bed sheet or a matte-white-painted wall would do in a pinch; I evaluated its performance with a tripod-mounted Epson ELPSC80 projection screen.

In addition to its onboard media sources, the Nebula Capsule II also has an HDMI port with ARC, along with a USB port for streaming media from a flash memory device (drives up to 2TB are supported). There’s a Bluetooth radio in there, too. Power is provided by a USB charging port with Power Delivery to charge its battery more rapidly. A too-short (3-foot) USB-C cable and USB-PD AC adapter are included in the box, as is an infrared remote control. The remote has a directional pad, volume control, and home-screen buttons for navigating Android TV and the projector’s own settings, plus a button to summon Google Assistant.

You can operate the projector on a tabletop, but a better solution would be to take advantage of the 1/4-inch thread mount in the bottom of the enclosure and mount it to a tripod. That’s what I did, and it made it so much easier to raise the device to the optimum height and to level it (it doesn’t have adjustable feet for that purpose). In addition to front projection, the Nebula Capsule II can also be configured for rear projection, and it can invert the picture so you can mount it from the ceiling in front of or behind the screen.

I needed only eight feet of distance from the screen to project a 72-inch image, and I took advantage of the automatic focus and keystone adjustments to make sure the picture looked its best.

On startup, the projector’s auto-focus feature analyzes its logo projected on the screen to make the appropriate adjustment in about one second. If you’re not happy with the result, or you move the projector, you can call up a more detailed image and either focus manually or repeat the auto-focus. Either way, the focus is a bit soft compared to a TV, but that’s the nature of the technology—and the resolution.

There’s an automatic keystone-adjustment feature as well, and it was equally quick to deliver the proper setting after I purposely distorted it using the manual controls. I don’t think anyone will find it necessary to make manual focus or keystone adjustments, because the automatic tools work quite well. I could say the same for the color temperature adjustments of “warm,” “normal” (the default), or “cool.” I found it difficult to discern the difference between the latter two settings, and I didn’t like the results “warm” delivered.

Now, 200 lumens of brightness isn’t a lot of light. You’ll find no shortage of AC-powered projectors offering 10 times the lumens, but they of course don’t run on battery power and aren’t nearly as self-contained. All that said, I tested the projector in my home theater at night and was pleased with the results. 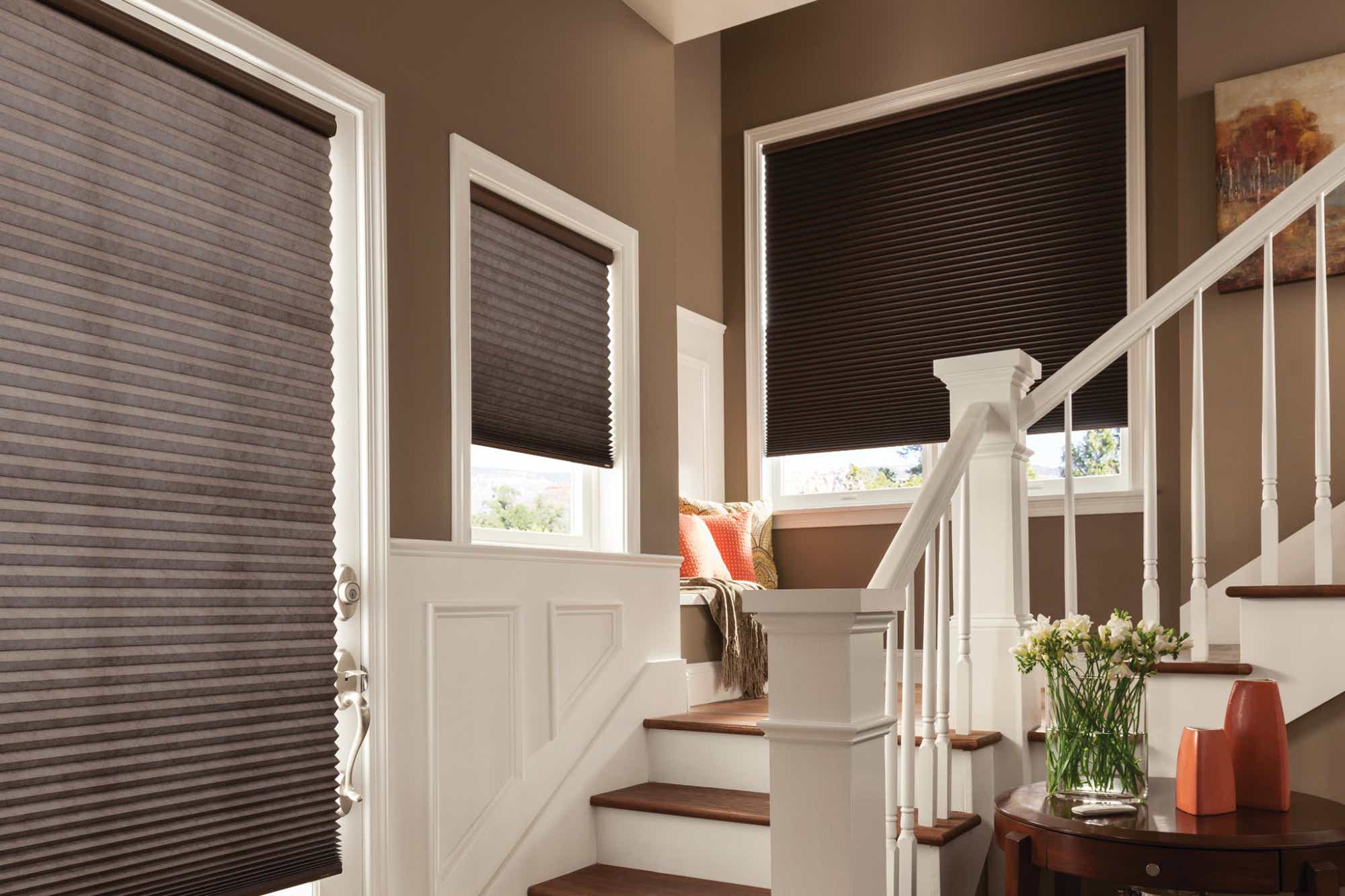 Read our review
MSRP: Made to order; price determined by size and accessories
Best Prices Today: $0 at ZebraBlinds.com

Watching movies on this class of projector is nothing like watching on a high-end TV. The resolution is lower, for one thing, and the Nebula Capsule II doesn’t support any HDR formats (and it’s not bright enough to deliver them anyway). It was basically unusable during the daylight hours unless I closed the Graber room-darkening motorized shades on the two windows in that room.

In a suitably dark room, the Nebula Capsule II delivered a pleasing picture with reasonably well-saturated color. The focus, as I said earlier, was a bit soft, but not objectionably so. And even with the Star Wars premium included, getting a 72-inch picture this way is easily a couple of thousand dollars cheaper than buying a similarly sized flat-screen TV.

But the feature that surprised me the most, to be honest, was the projector’s audio quality. A single speaker plus a passive radiator for enhanced bass response delivered a robustly satisfying audio performance with a 270-degree sound field that easily fooled my ears into thinking the audio was emanating from the screen eight feet away and not the projector that was inches from my seating position. And if you really want to get crazy, remember that there’s ARC support onboard (and you can pick up a 15-foot HDMI cable for less than $15).

The Nebula Capsule II is a bit pricey considering its brightness and resolution, but show me a similar device that delivers the same mix of entertainment features that will fit in a backpack and operate off the grid for more than two hours. I’d easily award that product four stars. But unless you’re a dyed-in-the-wool Star Wars fanatic, it’s hard to justify the upcharge for this R2-D2 model—no matter how limited of an edition it is—so I’m docking it a half-star.