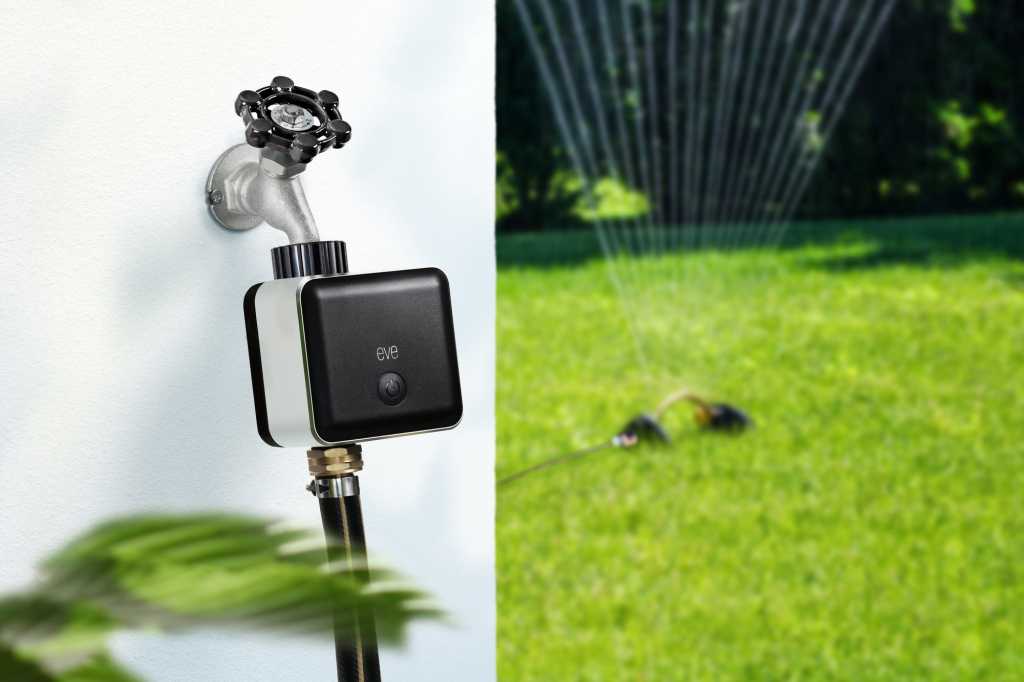 Eve Systems
At a Glance

The Eve Aqua is a fantastic device for irrigating your garden without wasting water, which is one of our most precious resources. But it will be of interest only to Apple users, it’s not necessarily superior to competing products that are cross platform, and it’s very expensive.

When it comes to smart watering timers designed for garden hose or drip irrigation—where “smart” is defined as “connected to the internet”—the pickings are pretty slim. There’s the Orbit B-Hyve Smart Hose Water Timer; the Melnor RainCloud Smart Water TimerRemove non-product link, which we have yet to review; and the Eve Aqua, which we’re reviewing here.

The Eve Aqua is doubly rare for not only being in Apple’s HomeKit smart home ecosystem but for also supporting the low-power wireless smart home standard Thread. But you’ll need an iPhone or an iPad to use it, plus a HomePod, an Apple TV, or (again) an iPad if you want to control it while you’re away from home. The alternative is to use Bluetooth and control the device only locally.

This review is part of TechHive’s coverage of the best smart sprinkler controller systems, where you’ll find reviews of the competition’s offerings, plus a buyer’s guide to the features you should consider when shopping for this type of product.

The device’s manufacturer, Eve Systems, prides itself on its consumer privacy protections, so there’s no product registration required to initiate a product warranty, no cloud services to sign up for, and all communications are between your iOS device and your HomeKit hub with end-to-end encryption. But that dependence on Apple products means Android users cannot use any of Eve’s products, including this one. The Eve Aqua also does not support Alexa or Google Assistant, so you’ll need to rely on Siri if you wish to control the smart valve with voice commands.

Setting up the Eve Aqua

The Eve Aqua is a cuboid device measuring 3.74 x 3.23 x 3.25 inches (WxHxD), not including the threaded hose connections. It operates on 2 AA batteries, which come in the box along with a plastic quick-connect hose attachment if you have the matching connector for your hose. You’ll want to program watering times in the Eve app, but there’s also a power button on its face that will open its valve when pressed and close it when pushed a second time. You can set a default shut-off time in the Eve app, and you’ll find a child lock there that disables the button if you fear mischief-makers.

The Eve Aqua user manual suggests you install the batteries, mount the smart valve to your spigot, and then connect it to your smartphone via Bluetooth. After doing it that way, I would suggest the better approach would be to install the batteries, connect it to your smartphone via Bluetooth, let it download two sequential firmware updates (the second of which will activate its onboard Thread radio), and only then mount it to your spigot. I did this with a second review unit that Eve sent, but wasn’t able to complete the final step because I learned they’d inadvertently sent me a European model which has different hose threads.

You’ll also want to take care when installing the batteries, which involves pressing on one side of the cube to push the entire face of the valve up. Not knowing how the compartment opened, my inclination was to grip the valve with my fingers on its face, which meant I was fighting with myself to get it opened, because the face pops out. When I moved my fingers away from that position, the compartment slid up with such force that it popped completely out and was dangling by the wires that connect the valve to the button. Fortunately, there’s enough slack in these wires that they didn’t break free from their soldered connections at either end.

Eve Systems has a single app for all its smart home products, which is great because you need to learn just one user interface for everything. It’s also confusing, because the app gets populated by every other HomeKit device you have installed. That left me with more than two dozen squares to navigate in the app’s home screen—labeled At a Glance—which looks completely different than the home screen in Apple’s Home app. Fortunately, you can limit the devices that show up here by designating a limited number of them as “favorites,” and you can re-order how they’re presented in a three-across grid.

Four icons sit across the bottom of the app: A home icon takes you to the At a Glance screen I just described, a Rooms button displays which HomeKit devices are assigned to each room in your home, an Automations button takes you to a screen where you can create those condition-based actions, and a Settings icon drills down into various device configuration options.

You’ll use the Rooms tool to create virtual rooms and organize your various HomeKit devices within them. This screen displays your smart home devices according to type: Power, for things such as smart bulbs, smart switches and dimmers, ceiling fans, and the like; Position, for devices like motorized window coverings; Contact, for door/window sensors; and Temperature, for smart thermostats and any other temperature sensors you might have deployed.

Here again, if you find all this information to be overwhelming, you can limit the device types that are displayed in this view, and you can arrange the order in which they’re listed in any way that makes sense to you.

In fact, it’s not really necessary to configure all your HomeKit devices in the Eve app—but being an obsessive type, I nonetheless spent several hours organizing everything in a fashion that pleased me. You will want to do this at least for your Eve devices, as it will make things easier when you get to the Automations section of the app, which is probably the most important tool of them all. This is divided into three tabs: Scenes, Timers, and Rules.

Scenes let you control multiple HomeKit devices at the same time; so, if you had one Eve Aqua for your front yard and a second one for your back yard, you could create a scene that controlled both of them with a single command: “Hey Siri, water the yard.” You can also define a default duration for the scene, so that the valve(s) will automatically shut after a defined amount of time elapses—anywhere from 10 seconds to four hours. If you want a visual reminder that you’re running water, you could even add a condition that turns a light on while the scene is running. There doesn’t seem to be a way, however, for the scene to turn the light off when the valve closes.

If you wanted to turn the water off earlier for whatever reason, you could either press the button or create a second scene to close the valve: “Hey Siri, stop watering the yard.” If you want an irrigation event to recur on an ongoing basis, you can create a timer that will repeat that scene every few days or every few weeks. You set the day you want the valve to open and the frequency at which you want watering to recur. The time that the valve remains open is determined in the scene you created earlier.

The Eve app will report the last time the valve was used, the default duration, and the estimated water consumption on a weekly and monthly basis. Unlike the competing Orbit B-Hyve Smart Home Watering Timer, however, the Eve Aqua won’t calibrate your water flow rate on its own.

Eve recommends instead that you manually enter a flow-rate value (in gallons per minute) based on your sprinkler’s documentation (the app has a default value of 4.8 gallons per minute). If you don’t have that information, you can buy a flow meter or simply put the sprinkler in a bucket, turn the valve on for one minute, and measure how much water is in the bucket. 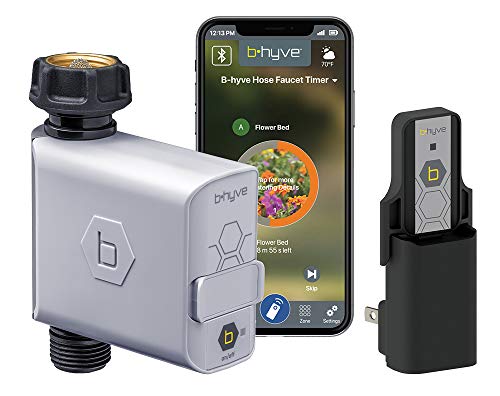 Also unlike the Orbit product, the Eve Aqua doesn’t have an automatic rain- or wind-delay feature. Orbit’s B-Hyve has a “smart watering” feature that will implement a 24-hour delay to prevent the device from watering if rain is forecast (which would rendering water unnecessary) or strong winds are coming (which could carry water away from the areas you’re trying to irrigate, or dissipate it so much that it would just evaporate) based on your zip code.

Eve sort of provides a work-around for this, but it’s based on Siri Shortcuts and is therefore not automatic. But when I tried it on my iPhone 12, I got the message “This shortcut cannot be opened because your Shortcuts security settings don’t allow untrusted shortcuts.” If I were to enable this untrusted shortcut, it would check the Weather app installed on my phone, and if rain is forecast, Eve will pause watering. But I would need to remember to run the shortcut by saying “Hey Siri, check watering.”

If you’re a hardcore HomeKit user, the Eve Aqua is a great tool for keeping your landscaping green without wasting water. Its extensive privacy features, however, prevent it from offering some useful features you’ll find in competing products, such as automatic rain and wind delays. You’ll also need to manually calibrate it if you want accurate water-usage reports. And while you can control it via Bluetooth, its HomeKit and Thread support are its best features. But that means you’ll want to have a HomeKit “home hub” (again, that means an Apple TV, an iPad, or a HomePod mini) set up to take full advantage.

There’s also the price to consider. While it could be argued that the Orbit B-Hyve Smart Hose Watering Timer is less sophisticated because it relies on Bluetooth and a Bluetooth-to-Wi-Fi bridge, and that it’s less sensitive to your privacy because it depends on a connection to Orbit’s servers in the cloud, Orbit’s product is also much less expensive. As of this writing, one valve bundled with the Wi-Fi bridge was selling for about $56 on Amazon, and each additional smart valve cost $39. The list price for the Eve Aqua is $99.95. Setting up a four-zone system (e.g., front yard, back yard, and two side yards) would cost $400 with the Eve Aqua—or about $500 when you include a $99 HomePod mini in the equation—compared to just $168 with Orbit’s solution (yes, I’m comparing street to list prices here, but the Eve Aqua wasn’t yet available at retail as I was writing this).

If you’re of the who-can-put-a-price-on-privacy mindset, that price difference might not bother you. Ditto if you think HomeKit is the be-all, end-all of smart home technology (and I must admit, it is becoming pretty great). Apart from those two considerations, Eve’s product isn’t necessarily superior to what the competition has to offer, and it’s very expensive in comparison.