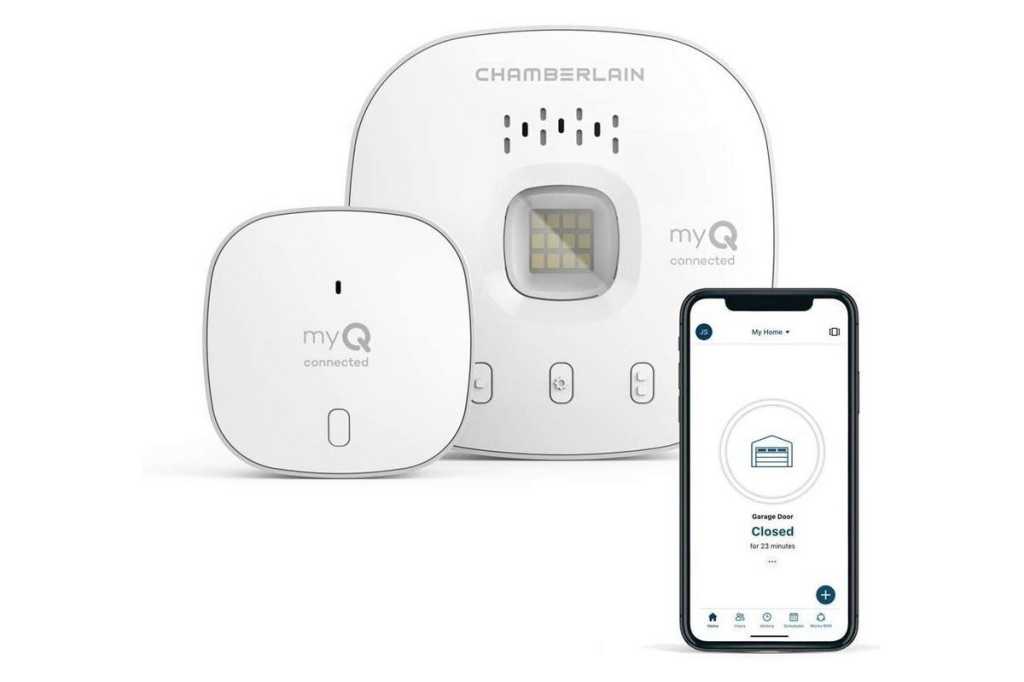 This top-notch smart garage door controller can handle two doors at once and definitely won’t break the bank.

The Chamberlain myQ system has been my top smart garage door controller pick since we first tested it two and a half years ago. Naturally, the system has undergone its share of upgrades and enhancements since then, particularly with its app, and now a hardware upgrade has arrived as well.

The new myQ, model MYQ-G0401, is primarily driven by cosmetic changes—it’s white instead of black, both the controller and the door sensor have been redesigned, and a new wall plate makes mounting simpler—but otherwise its core functionality is the same. Aside from needing to plug in the controller hub to wall power, it remains a completely wireless system that is massively simpler to set up than competing units that require a hardwired connection to the garage door motor and/or the door sensor.

This review is part of TechHive’s coverage of the best smart garage door controllers, where you’ll find reviews of the competition’s offerings, plus a buyer’s guide to the features you should consider when shopping for this type of product.

Like its predecessor, the new myQ steps you through the setup process—instructions are completely contained within the myQ mobile app—which involves a few hardware button presses, punching in your Wi-Fi information (2.4GHz only), and pairing the device to your motor by pressing the “learn” button on the device. (Aside from possibly mounting the device, this is the only step you’ll need a ladder for.) Much like the prior myQ, the G0401 is compatible with almost every opener manufactured after 1993 (apart from Marantec and a few others), so compatibility should be nearly universal.

In my testing, I did experience some initial setup problems. First the unit wouldn’t accept my Wi-Fi credentials, then it wouldn’t pair to either of two different motors. When I tried to set the unit up again later, I didn’t have any trouble, and I later learned that myQ was undergoing a service outage during my initial setup window. Aside from occasional disconnects—which are common with every smart garage controller product—the unit has worked well ever since. The inclusion of Bluetooth Low Energy is designed to make setup simpler, though aside from the noted issues, I didn’t notice any major changes from the previous edition.

At its heart, the myQ feature set remains the same as before. You can open and close the garage door on demand and from anywhere, and the system boasts increasingly broad compatibility with Vivint Smart Home, Amazon Key, Ring, Google Assistant, and more. A detailed notification system lets you set reminders when a door has been left open or is stuck with push and/or email notices, which can be sent any time of day or only at certain times. Scheduling is built into the app, as is a robust history system that logs every open and close operation.

New to the app is a more advanced sharing system that lets you add co-owners and guest access, much like you would with a smart door lock, with different levels of access available for guests, including recurring and time-limited access options. It’s a convenient way to give caregivers and temporary workers access to the home if you don’t have a smart door lock (or you simply don’t want people coming in through the front door).

The list price of $40 is $10 less than the prior model was at release, but it remains widely available for $30, the same as before. A single door sensor comes in the box. You can control a second door if you purchase an additional sensor (which bafflingly also costs $30); but if you have a three-door garage, you’ll still need a second controller to handle the extra work.

If you already have a myQ system installed, there’s zero reason to consider upgrading to this new model. If, however, you’ve yet to invest in a smart garage door controller, the myQ system remains—far and away—my top recommendation.