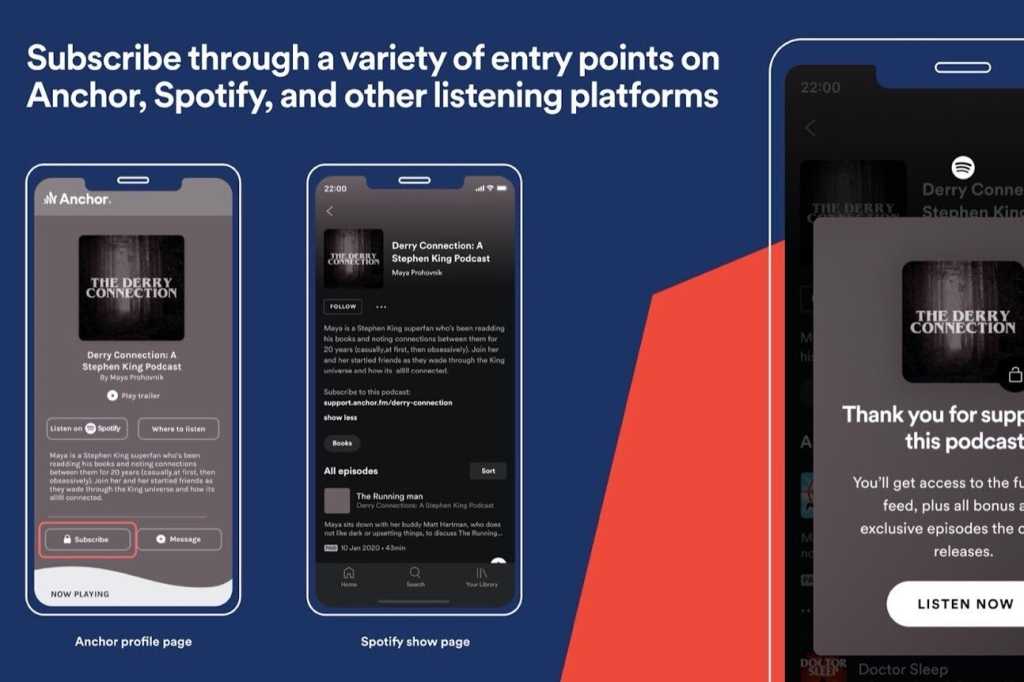 Barely a week after Apple unveiled a paid subscription program for podcasters, Spotify is now launching its own, complete with sweeter terms and—eventually—a larger base of potential subscribers. The only downside? Listeners will have to jump through more hoops to hit the “subscribe” button.

Available through its Anchor podcasting platform, Spotify’s paid subscription service lets podcasters charge either $2.99, $4.99, or $7.99 a month for their shows.

More enticingly, content creators will be able to keep 100 percent of their subscriber revenue for next two years, although they’ll be on the hook for transaction fees. Spotify says it will start collecting 5 percent of podcast subscription revenue in 2023.

Apple’s competing podcast subscription program lets podcasters set their own prices, starting at 49 cents a month, but Apple is also demanding a 30 percent cut of subscriber revenue for the first year that a podcaster uses their platform, followed by 15 percent thereafter.

With Apple’s familiar, heavy handed piece of the action, it’s easy to imagine podcasters turning to Spotify’s more lucrative subscription terms. That said, Apple has an ace up its sleeve: a “subscribe” button right there within the Apple Podcasts app, making for a seamless, one-click sign-up process.

Spotify users, on the other hand, will have to navigate to a podcaster’s Anchor page to sign up for a subscription. There will be links to podcaster Anchor pages within the Spotify app as well as on other podcast platforms, but still, the extra step could turn off potential subscribers.

While Spotify’s more than 150 million paid subscribers dwarfs the 60 million (at last count) for Apple Music, Apple has historically enjoyed more podcast listeners than its massive rival. But according to a recent forecast, Spotify’s number of podcast users is set to surpass Apple’s starting next year, with 33.1 million and rising Spotify podcast listeners versus a flat 28 million for Apple.

Spotify says it’s kicking off its paid podcast subscriber platform, which it first announced during its “Stream On” event in February, with a dozen “independent” podcasters who will offer “subscriber-only bonus content in their existing podcast feeds.”

Starting on May 4, NPR will be serving up a “selection” of ad-free shows on Spotify for paid subscribers, including How I Built This with Guy Raz, Short Wave, It’s Been a Minute with Sam Sanders, Code Switch, and Planet Money.

It’s worth noting that Spotify’s most popular—and exclusive—podcasts will remain free for now, including The Joe Rogan Experience, Crime Show, the Bruce Springsteen/Barack Obama-hosted Renegades, The Michelle Obama Podcast, and Internet Urban Legends.