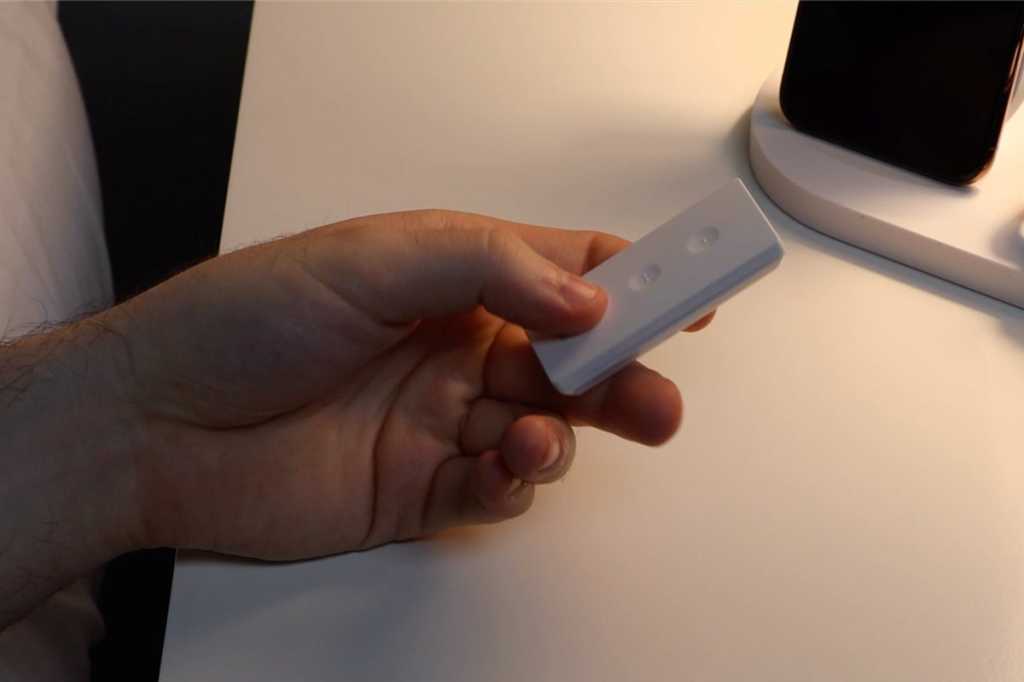 The $50, three-button gadget can trigger up to six HomeKit scenes, activated by either long or short presses on each of its buttons. Each scene can include commands sent to a broad range of HomeKit-compatible devices, so six scenes gives you a lot more power than you might think.

A “bedtime” scene, for example, could turn off all the lights in your home and adjust the thermostat to an energy-saving target temperature.

Wemo brand-owner Belkin says the Stage is designed for those times when your smartphone isn’t handy, and you don’t want to bark a command at Siri. But you will need to have at least one Apple home hub—a HomePod, HomePod mini, or Apple TV—in your home for the system to work.

The remote can be used as a handheld device, or you can mount its faceplate on the wall using the provided adhesive strips, snap the Stage to the magnetic faceplate, and operate it like a wall switch. It’s powered by a single CR2032 coin-cell battery, which is expected to last about two years.

The Stage communicates with an Apple home hub using Bluetooth today, but will support the IPv6-based Thread protocol sometime after launch, when it will function as a Thread endpoint (at that point, you’ll need a HomePod mini or a second-gen Apple TV 4K, as the other home hubs lack Thread radios.

Belkin also told us its “Wemo [brand] is moving to CHIP [the Connected Home over IP initiative] in a big way.” To that end, only Wemo devices predating the Stage will continue to use the Wemo app. The Stage and all new Wemo products will use the iOS Home app, instead. The company assures us, however, that legacy Wemo products will continue to receive firmware updates.

The Wemo Stage Scene Controller should be available for purchase in the U.S. now, and in Canada starting in May. We’ll have a full review once we get our hands on an evaluation unit.