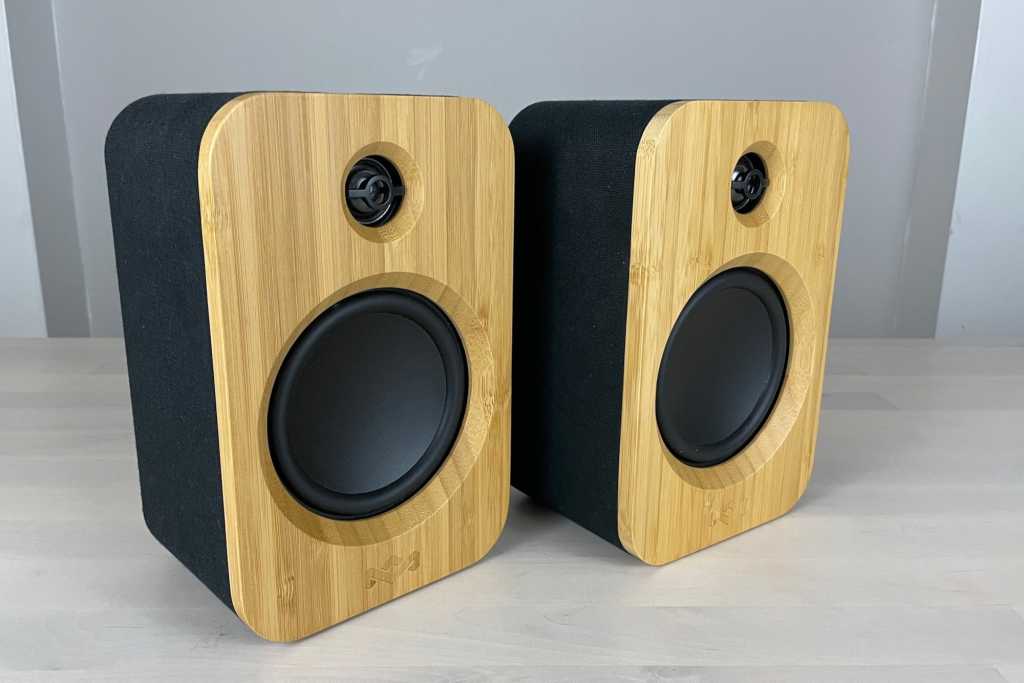 House of Marley has managed an impressive feat with its Get Together Duo speakers, which deliver tight, punchy sound in an earthy, eye-catching package for a surprisingly affordable price.

Best Prices Today: House of Marley Get Together Duo

House of Marley has managed an impressive feat with its Get Together Duo speakers, which deliver tight, punchy sound in an earthy, eye-catching package for a surprisingly affordable sticker price. Capable of connecting to audio sources via wired connections or via Bluetooth, the speakers can be used as a stereo pair, while the right speaker contains a rechargeable battery for portable mono sound.

But while the Get Together Duo speakers offer impressive performance and value for just $150, there are caveats. The speakers’ sound, while crisp and alive, may disappoint those looking for huge beats, while fans of high-resolution audio will decry the lack of not only lossless Bluetooth codecs but also the lossy AAC codec, which leaves only SBC, the default Bluetooth audio codec. Finally, while the battery-powered right speaker is portable, its exposed wood and drivers look like they could be easily damaged by moisture, drops, or (heaven forbid) pokes from stray items in a backpack.

Measuring 7.9 x 4.1 x 5.1 inches (HxWxD), the twin Get Together Duo speakers cut fine figures. With their natural bamboo housings (in keeping with its sustainability theme, House of Marley notes that bamboo is “one of the fastest growing plants in the world”) and “Rewind” fabric coverings (a mix of reclaimed and recycled cotton, hemp, and polyester), the Get Together Duos boast a stylish yet earthy look that matches its other Get Together speakers. It’s worth noting, however, that the dark fabric covering is a lint magnet.

The two speakers are reasonably light, with the mains-powered 2.3-pound left speaker a tad lighter than the battery-powered 2.7-pound right speaker. With their boxy shape and lack of a handle, the speakers can be a bit awkward to carry around, and while you can pick each one up with a single hand, you probably wouldn’t want to hold them that way for long.

The House of Marley’s promotional materials show enthusiastic listeners toting the portable right speaker around in the great outdoors, but you might want to think twice before doing so. 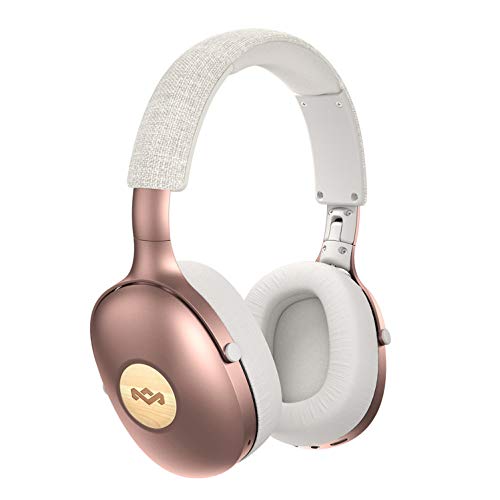 A House of Marley rep told me that the speakers could probably endure some light sprinkles (they lack an actual IP rating), but with their exposed drivers, the fabric covering, and the bamboo casing, the Get Together Duo speakers look too delicate for taking out into the rain or any type of rough-and-tumble activity. I was also concerned by a small but noticeable nick in the top-left corner of my review unit’s right speaker, which seems to have occurred before the review units even came out of the box.

Each 20-watt Get Together Duo speaker has two drivers: a 1-inch, silk-dome tweeter and a 3.5-inch paper cone woofer with a polypropylene dust cover. The two drivers in each speaker share a single Class D amplifier.

As far as power goes, only the left Get Together Duo speaker requires a power adapter, which comes in the form of a roughly five-foot cord with a chunky 15V/0.8A power adapter at the end. The portable right speaker, on the other hand, contains a 5,200mAh lithium ion battery that you can charge via a rear USB-C charging port. House of Marley promises about 20 hours of battery life on a single charge; I’ll talk more about battery life in the performance section.

The House of Marley Get Together Duo support Bluetooth 5.0, although their audio codec support is somewhat limited. Not only do the speakers lack support for lossless Bluetooth codecs such as Qualcomm’s aptX Adaptive and Sony’s LDAC codecs (not too surprising, given the $150 price point), I’m also told that they don’t support AAC, the lossy audio codec most commonly used by iPhones, iPads, and Apple Music. That means you’ll have to settle for the default Bluetooth SBC codec, which is a slight step down from AAC in terms of audio quality but requires far less computational power, making it a better fit for many Android phones with low-power energy profiles.

Besides their Bluetooth support, each speaker has its own left/right RCA-style connectors and a 3.5mm auxiliary jack. A stereo RCA-to-RCA cable and a USB-C charging cable are included in the box.

Because of their various wired and wireless connections, the Get Together Duos offer a variety of interesting connectivity options, including fully wired, fully wireless, and a combination of both.

For starters, you can go all wired, either in stereo or mono configurations. You could, for example, connect a pre-amped turntable’s stereo RCA outputs to both Get Together Duo speakers, with the left channel going to the left speaker and the right channel going to the right. Another option would be to connect an audio source to a single speaker’s 3.5mm aux jack for mono sound.

If you want to stick with Bluetooth, you have a couple more options. One would be to power up both speakers, allow them to wirelessly pair with each other, and then connect a phone, a laptop, or a turntable (such as House of Marley’s Stir It Up Wireless TurntableRemove non-product link) via Bluetooth. You can also use Bluetooth to stream mono audio to one speaker or the other—and in this scenario, you could pair with the portable, battery-powered right speaker for on-the-go tunes.

Finally, you could take a hybrid wired/wireless approach, using a combination of the RCA/aux inputs and Bluetooth. For example, you could connect (say) a turntable to the left speaker via their wired RCA or auxiliary connectors, and then wirelessly connect the left speaker to the right one via Bluetooth.

Four tactile, clickable buttons sit at the top of each speaker cabinet: a pair of volume buttons, which double as skip track/next track buttons when pressed and held; a Bluetooth pairing buttons that (confusingly) doubles as a play/pause button; and a power button that, when pressed repeatedly, cycles through the speaker’s Bluetooth, RCA, and auxiliary input modes.

Next to the buttons are a pair of LEDs that glow in various colors depending on the speaker’s power and connectivity status. For example, the connectivity LED blinks blue when it’s in Bluetooth pairing mode, and glows a steady blue when connected. The LED can also turn red when the speaker is switched to the aux input, or purple for the RCA inputs. The power button, meanwhile, glows red when the speaker is powered on and (in the case of the portable right speaker) blinks when the battery is nearly depleted.

Maybe it’s because of the bamboo cabinets, but when I think about Get Together Duo’s sound, I’m somehow reminded of the crack of a perfectly hit baseball. Indeed, these compact speakers boast a crisp, tight sound that favors higher frequencies without sounding too bright, while low-frequency effects pop off the woofers. Those looking for huge, boomy beats might be disappointed, but I think House of Marley made the right choice by aiming for a lighter, more natural sound.

Making a beeline for Ciara’s “Level Up” on Spotify via Bluetooth, the Get Together Duos reveal the nuance in Ciara’s energetic vocals as well as in the driving, multi-layered percussion, making for a roomier, more atmospheric sound that isn’t swamped by the bass. For Janelle Monáe’s “Make Me Feel,” the speakers precisely delivered the opening clicks and clucks before jumping into the track’s cool, pleasingly fizzy funk.

Switching over to The Boss, the Get Together Duos deftly handled Bruce Springsteen’s spare vocals and acoustic guitar strums on “The Ghost of Tom Joad” while warming up for the glowing notes from the synthesizers. I also liked the atmospherics and timbre of Larissa Devoda’s performance of Maurice Ravel’s solo piano words for the Centaur label, as well as the thrilling sweep of Beethoven’s Seventh Symphony as conducted by Carlos Kleiber for Deutsche Grammophon.

The Get Together Duo retains its tight, punchy sound when listening to just the portable right speaker, with plenty of details and nuance while (of course) losing the wider soundstage. PJ Harvey’s “Highway ‘61 Revisited” on Rid of Me sounded appropriately stark and bracing, although again, mid-range sonics are emphasized much more than bass.

I didn’t perform a formal battery life test on the portable Get Together Duo speaker, but I played it for much of a Friday on battery power, let it sit over a weekend and then continued playing it for several hours on Monday the following week. In other words, I’d feel comfortable bringing the portable speaker for a day in the park (and handled with care) without worrying about bringing along a charger.

Overall, the House of Marley Get Together Duo Bluetooth speakers make for a great value, provided you can live with the lack of lossless and AAC Bluetooth codec support as well as the relatively delicate design of the speakers themselves. But while we’d balk at taking the portable right speaker out in the rain or mud, we’d certainly bring its crisp, clean sound along for a sunny backyard barbecue, and as a pair, the Get Together Duo makes for a perfect companion for a turntable.

Best Prices Today: House of Marley Get Together Duo