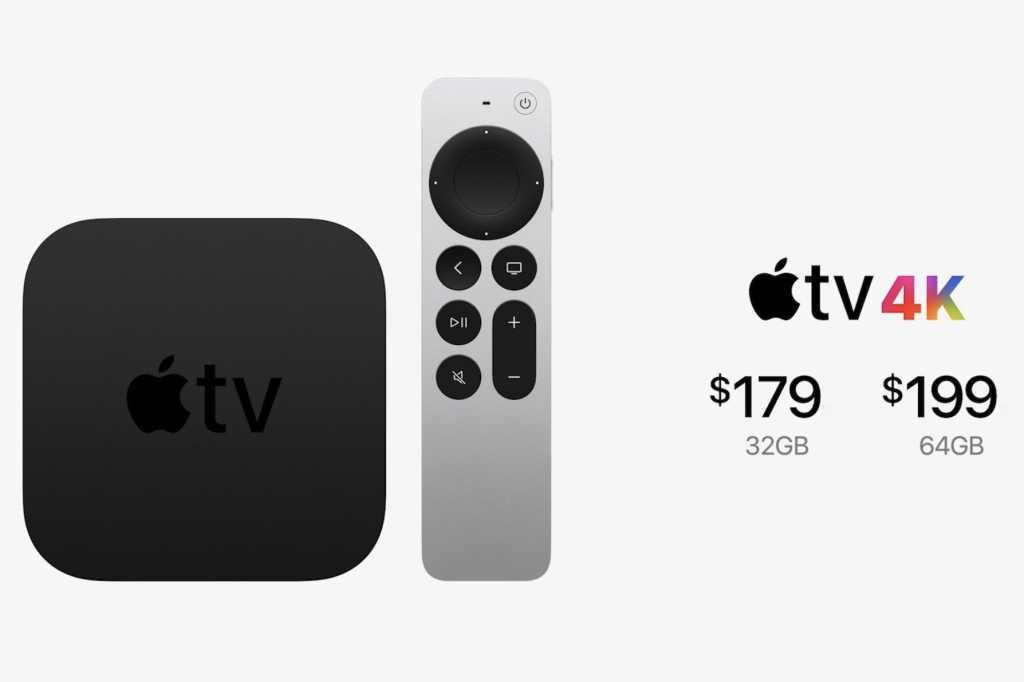 Apple has announced a second-generation Apple TV 4K with a new and unambigously designed Siri remote—at last, there’s no more holding the remote the wrong way! The new streamer is powered by Apple’s A12 Bionic processor, which will enable high frame rate HDR (high dynamic range at 60 frames per second) on streaming services that offer it.

The new Siri remote, and an intriguing color-balance feature that is part of tvOS 14.5, will also be available on the first-gen Apple TV 4K as well as the Apple TV HD.

One thing that hasn’t changed about the new Apple TV 4K is the price: Yes, it’s still a whopping $199 for the 64GB model and $179 for the 32GB version, with the updated models slated to ship in May following an April 30 pre-order date. The new Siri remote costs $59, or it can be purchased with an Apple TV HD for $149—that’s about $50 higher than the most expensive 4K players from Amazon, Roku, and other competitors. It’s worth noting, of course, that those competitors don’t include smart home hubs.

The new Siri remote boasts a one-piece aluminum design and a five-way clickpad that replaces the flat touchpad on the old remote. The touch-sensitive clickpad sits in the top half of the remote, which will make it obvious which way is up on the redesigned wand.

Even though the flat touchpad from the old Siri remote is gone, you’ll still be able swipe the new clickpad to navigate the Apple TV interface, while a circular gesture lets you “scrub” back and forth on the video you’re watching.

Most of the other buttons on the new Siri remote are familiar, including the play/pause, mute, and volume controls, but now there’s a power button that will turn your HDMI CEC-enabled TV on and off. Meanwhile, the Siri button has now been relegated to the right edge of the remote, duplicating the iPhone experience.

With its redesign, the Siri remote is no longer a feasible game controller for Apple TV, which is interesting given Apple’s recent focus on turning the set-top box into a game console courtesy of its Apple Arcade game subscription service. Instead, Apple encouraging gamers to connect their PlayStation and Xbox controllers to Apple TV, a feature that was added in tvOS 13.

Apple also showed off a nifty new feature that leverages your iPhone (assuming you have an iPhone, of course) to help the Apple TV compensate for inaccurate color balance on your TV screen.

With help from on-screen prompts, you hold your iPhone up to a designated spot on your TV, with the iPhone’s camera and proximity sensors guiding you to just the right location. The Apple TV then uses your iPhone’s light sensor to scan your TV’s color balance and compares it to industry standards used by cinematographers. If Apple TV detects any inaccuracies, it will adjust its video output to compensate. Pretty neat—although the feature won’t you do much good if you’re an Android user, of course, and this color-balancing trick won’t do anything to calibrate your TV’s color when its displaying sources other than an Apple TV.

Apple mentioned the Apple TV 4K’s HomeKit functionality only in passing. However, it’s worth noting that a Thread radio is now listed on the specifications page for the new Apple TV TK. That makes the updated set-top box the second Apple device that can connect to Thread-enabled smart home devices, besides the HomePod mini.

Last but not least, good news for Ted Lasso fans: A new season of the hit comedy is slated to arrive July 2, so mark your calendars.

Updated shortly after publication with details about the Apple TV 4K’s gaming and smart home features, including the addition of a Thread radio.