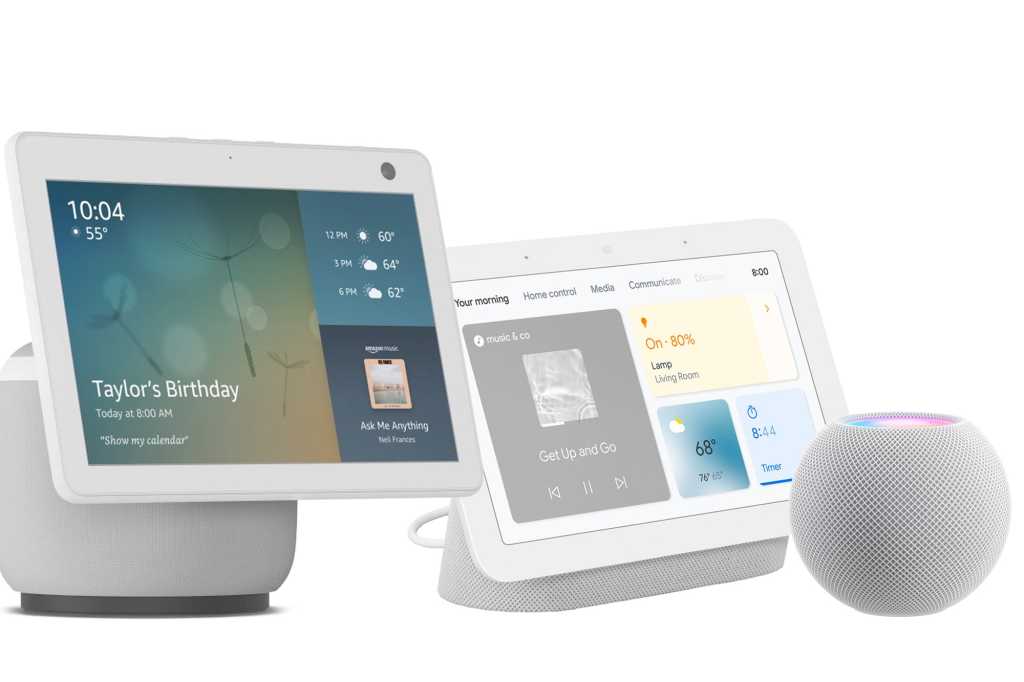 Apple sold 2.4 million smart speakers in the U.S. market during first quarter of 2021, according to the market research firm Omdia, beating Google’s sales by 100,000 units during the same period. The firm estimates the new Apple HomePod mini accounted for 91 percent of Apple’s U.S. smart speaker sales during that time.

Apple’s share of smart speaker shipments in the U.S. market reached 17.8 percent during the first quarter, a 9 percent increase year over year. But Omdia estimates there were 75 million smart speakers based on Google Assistant on the market at the end of 2020, compared to just 10 million based on Apple’s Siri. And Amazon dominates both of those competitors, with a current installed base of 141 million smart speakers using its Alexa voice assistant. Omdia’s numbers for Google Assistant and Amazon Alexa include third-party smart speakers (excluding soundbars) based on those technologies; Apple, of course, doesn’t license Siri.

Omdia smart home analyst Blake Kozak, however, predicts Apple’s edge over Google won’t last, because Apple doesn’t have a HomePod with a display. Kozak estimates that 38 percent of all smart speakers shipped globally during the first quarter of 2021 were outfitted with displays, and that just 4 percent of the smart speakers shipped during that time were portable models. Kozak also predicts strong sales of the Google Nest Hub (2nd Gen) will enable Google to reclaim its lead over Apple. Amazon, meanwhile, has a commanding lead in the smart speaker market in the U.S., Germany, France, United Kingdom, Australia, China, and South Korea, shipping 8.2 million units in the first quarter of 2021 alone.

According to Omdia, overall smart speaker sales in the first quarter increased by a whopping 122 percent year over year, but the firm believes fewer consumers are buying their first smart speaker compared to a few years ago. According to its findings, more than two-thirds of sales are going to consumers who are adding units to homes that already have at least one. When the firm surveyed 14,400 people across six countries in November 2020, Kozak says, they logged a 26 percent increase year over year in respondents who said they owned two or more smart speakers.

To change that dynamic and convince more first-time buyers to enter the smart speaker market, Kozak believes manufacturers will need to develop new use cases for smart speakers and smart displays, pointing to the new sleep-tracking feature in the second-gen Nest Hub and the swiveling display on the Amazon Echo Show 10 (3rd Gen) as examples of features that are likely to attract new buyers.

In the survey mentioned earlier, Omdia also asked smart speaker owners what they used their devices for most often. The most prominent use case was “answering a question,” followed by “check the weather/news,” but Kozak says the fastest-growing use case is to control smart home devices.

Looking at the worldwide smart speaker market, Amazon accounted for 22 percent of all shipments in the first quarter, but three Chinese manufacturers are closing fast: Alibaba shipped 21 percent of all smart speakers sold in the first quarter, while Baidu and Xiaomi were responsible for 14 percent each. Google’s worldwide market share was 9 percent, while Apple and various other manufacturers divvied up the remaining 20 percent of the pie. All that said, Kozak reports few if any Alibaba, Baidu, or Xiaomi smart speakers are available in North America. He says the European market could begin to see smart speakers from Xiaomi and Huawei later this year or in early 2022, with the former relying on Google Assistant.

As for the future of smart speakers, Kozak predicts Thread and CHIP (Connected Home over IP) will become increasingly important—over time. In the meantime, more established connectivity technologies such as Z-Wave and Zigbee will prevail. “…until more brands start releasing Thread enabled devices or until CHIP takes hold,” Kozak said, “Thread will remain a niche connectivity technology for the smart home.”

Google, Amazon, and Apple are all on the CHIP bandwagon, but only Apple and Google have products with Thread radios today: Google’s Nest Hub (2nd Gen), Nest Hub Max, and Nest Wi-Fi mesh network system; and Apple’s new HomePod mini. The just-announced, second-gen Apple TV 4K, which is due to arrive next month, will also boast a Thread radio.

Amazon is sticking with Zigbee for now, a technology it has supported since the Amazon Echo Plus debuted in 2017, although its Ring smart home division supports Z-Wave as well (the Ring Alarm system has both Z-Wave and Zigbee radios).

Kozak has a similarly positive outlook for Apple’s HomeKit smart home technology. “Up until about 12 months ago,” Kozak said, “both Apple and Thread had limited impact on the smart home market, but this is changing rapidly. Apple’s HomeKit should have an expanded role across the smart home in the future, especially as Apple looks to reduce the proprietary nature of its platform.”