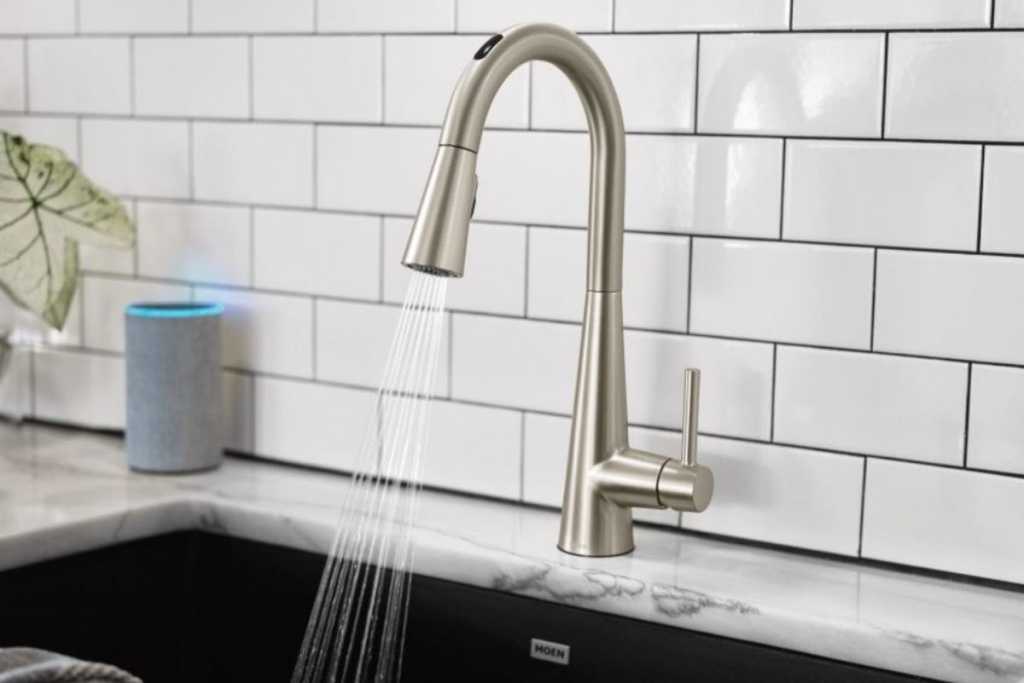 Image: Moen
At a Glance

Voice control and other smart features boost the price of this kitchen faucet, but the price is justified by the convenience and control it provides.

Voice control, using either Alexa or Google Assistant, is the star attraction of the U by Moen smart faucet, but after testing this kitchen tool for several months, I’ve concluded that its gesture control feature is far more useful.

Don’t get me wrong. Voice control is no gimmick, as you’ll see when I dig into all the things you can do with voice commands. But the tasks for which I use a faucet most often—washing my hands, rinsing dishes, filling a watering can for my houseplants, and the like—all the technology I need is waving my hand over the faucet to start the flow of water, and then again to stop it.

But that could be because I live in a rural area and draw my water from a well. My well water has very high levels of calcium and other dissolved minerals (in common terminology, my well provides very hard water), so we purchase locally sourced bottled spring water for drinking. If you use tap water for drinking and cooking, as well as for washing your hands and dishes, I suspect you’ll find voice control much more useful. If nothing else, it is geeky fun and a great way to impress visitors to your smart home.

Installing the U by Moen

Installing the U by Moen smart faucet isn’t appreciably different than installing a conventional faucet. The biggest difference is that this one comes with a control box and a power source (a plastic box into which you’ll insert six D batteries, which are included in the box). You’ll connect the hot and cold water supply lines under your sink to the control box, and then connect the single supply line emerging from the box to the faucet (hot and cold water is mixed in the control box, so only one line needs to be connected to the faucet).

This design posed a problem for my installation because my kitchen has a fireclay apron-front sink that weighs 173 pounds. To support that weight, the cabinet in which it’s installed is reinforced with extra bracing, and the sink itself rests atop a thick sheet of plywood. Between all that wood, the garbage disposer, and the sink’s 1.5-inch-thick walls, there’s not a lot of room to work under there—especially at the back of the sink where the control box would hang from the faucet.

Fortunately, Moen offers an optional bracket (see above) that you can use to mount the control box to the wall instead of hanging it from the faucet’s shaft. Moen sent that bracket along with an optional AC adapter and power splitter that converts the battery pack into a backup power supply. Since the outlets under most kitchen sinks are split, with one always-on outlet for your dishwasher and a switch-controlled outlet for your garbage disposer, you’ll want to install an outlet splitter under the sink. You could use a power strip, instead, but that could get wet and cause trouble if your sink, water lines, or dishwasher spring a leak.

U by Moen accessories are not cheap. List price for the mounting bracket is $51, and the power adapter/splitter costs $136. The good news is that you might not need either of them. The mounting bracket is just for situations like mine, where there isn’t sufficient clearance behind the sink. And Moen says the six D batteries should last two years, provided there’s a strong 2.4GHz Wi-Fi signal at the location where the control box needs to be installed (the faucet cannot connect to 5GHz Wi-Fi).

You’ll also need to install the Moen app to enable all of the faucet’s features.

Using the U by Moen with voice commands

You can control the U by Moen smart faucet with Alexa or Google Assistant voice commands. While I have both systems in my home, we use primarily Alexa for smart home control, so I’ll use Alexa commands in my examples below. Google Assistant commands work the very same way. As I mentioned up top, if you just want to turn the water on and off, waving your hand over the sensor in the faucet’s neck is quicker and easier than talking to your smart speaker. But that’s really all that sensor can do. If you want to adjust the temperature of the water, you’ll need to reach for the handle anyway, although the app does give some options, which I’ll explain in a bit.

So, you can of course ask Alexa to turn the faucet on or off, but you can also ask Alexa to dispense water at a generic temperature (“hot” or “cold”), or you can have the water preheated to a defined temperature before it’s dispensed. You can even combine two commands into one to have a precise amount of water dispensed at a desired temperature.

Voice commands come in super handy if you use tap water for baking or cooking, because you can tell the faucet to dispense a precise amount of water—1 tablespoon, 1 cup, 12 ounces, or what have you—at a specific temperature. For example, say “Alexa, tell Moen to pour 1 cup of water at 100 degrees,” and she’ll reply “First, I will run the water to temperature. Wait for the water to stop. When the light is solid, you can wave over the sensor for 1 cup of water at 100 degrees.” While she’s replying the spigot will open until the water coming out reaches 100 degrees. When the light turns solid and the water shuts off, wave your hand over the sensor and the faucet will dispense the requested amount of water at the desired temperature and then automatically shut off.

What’s more, you can create your own custom presets, with options that include the amount of water you want dispensed (using either imperial or metric units of measure), the temperature of the water, and the rate at which the water will flow (on a scale of 50 to 100 percent). Presets can be useful for routine, repetitive tasks such as preparing oatmeal or reconstituting baby formula. Once you’ve defined the preset’s parameters, you can just place a pot or other container under the faucet and say “Alexa, start oatmeal” to have the faucet dispense the requested amount of water. If you include a temperature parameter, you’ll need to wait for the water to reach that temp and the faucet to shut off. Then you’ll put the container under the faucet and wave your hand over the sensor.

Using the U by Moen with gestures

Waving your hand over the faucet to start and stop the flow of water isn’t nearly as sexy as talking to a smart speaker, but it’s much quicker when you don’t need a specific amount of water or for the water to be a defined temperature. The sensor is located at the top of the faucet’s neck, above the pull-out sprayer, and there’s an LED that changes color with the temperature: Blue for cold and various shades of red for warm to hot water. The pull-out sprayer, incidentally, has three buttons: One switches the default aerated stream to a spray, the second switches back to a stream, and the third boosts the intensity of the water coming out of the sprayer. When you turn the water off, the faucet reverts to a flow at normal intensity the next time you turn it on.

You can control the temperature with the handle at the base of the faucet, but I’ve found it most convenient to leave the handle in the “hot” position, since the water comes out cold until the faucet draws water from the water heater. You can also use the lever to turn the water on and off, but where’s the fun in that? I’ve become so accustomed to using gestures to turn the water on and off that I frequently find myself waving at the sink-prep faucet next to my stove, the bar sink at my wet bar, and the sinks in my bathrooms. I even found myself doing it in kitchen area of my travel trailer on a recent camping trip.

The U by Moen app

Who’d have thought you’d ever need an app for your faucet? Well, you don’t necessarily need Moen’s app to use the faucet, but the app does have its uses—many of them, in fact.

If you live in a very cold environment and are worried your pipes might freeze, you can even set the faucet to trickle a small amount of water as a preventative measure (this is based on the ambient temperature inside the cabinet where the control unit is installed). The app will also display bar charts reporting the amount of water the faucet has dispensed by the day (hourly), the week (each day of the week), month (also each day of the month), and year (each month of the year).

Is the U by Moen a good value?

Moen manufactures the U by Moen faucet in a broad variety of styles and finishes. The unit sent for this review was the Sleek Spot Resist Stainless Steel (model number 7864EVSRS), which has an MSRP of $709.60 (Moen’s list prices are weirdly specific). The company sells a virtually identical model without any of the smart features (Moen model number 7864SRS) for $466.90, and a version with just the hands-free technology (the Moen MotionSense model number 7864EWC) for $567.70, so voice control adds a significant sum to the overall cost.

Street prices for all three models are quite a bit lower than MSRP, however; I found the U by Moen model at Amazon for $450, the MotionSense model for $360, and the dumb version for $272. You’ll also want to take Moen’s warranty into consideration: It offers a limited lifetime warranty on the trim parts, but the digital components are only covered for 5 years.

Even though I’ve found that I use gesture far more often than voice, I’d pay the additional $142 to move up from the MotionSense model to the U by Moen product, because you’re getting more than just voice control. You also get quantity and temperature control, automatic shutoff, water consumption tracking, and freeze protection. So yeah, I’d say the U by Moen is a good value. And it’s definitely been fun to show off to my (vaccinated) houseguests.