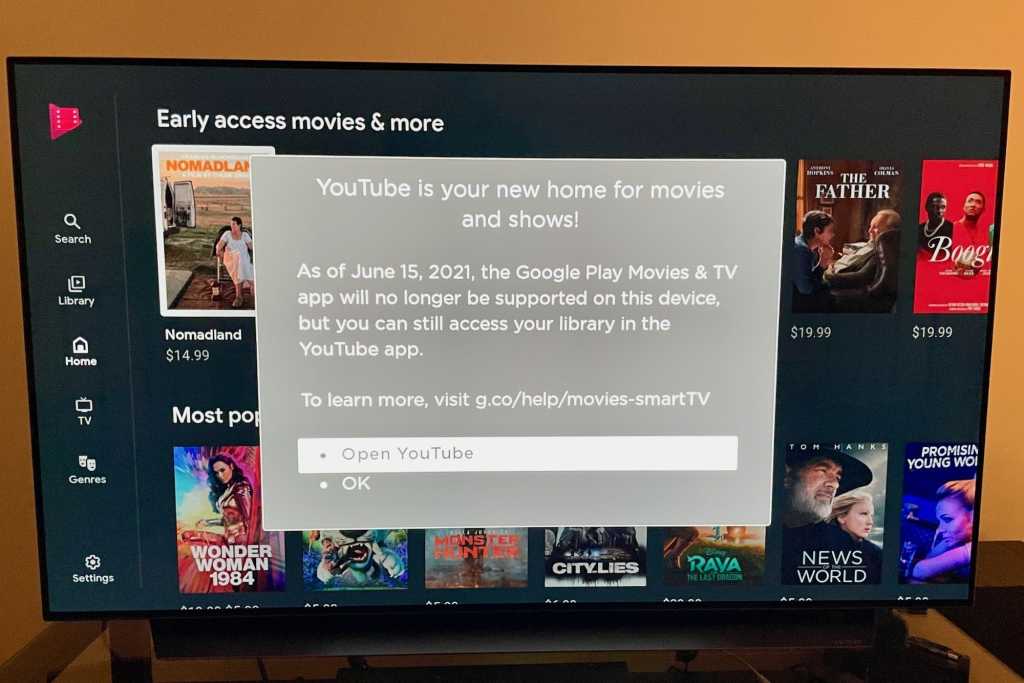 It’s out with the old and in with the new as far as Google’s streaming video plans are concerned, and that means Google is set to nix its aging Play Movies and TV app for Roku and smart TVs from LG, Samsung, and Vizio. Luckily, there will still be a way to watch your purchased videos on those platforms.

In a document on its Google Play support site (which was first spotted by 9to5Google), Google says it will pull the Play Movies and TV app from Roku devices and LG, Samsung, and Vizio smart TVs on June 15.

That’s the bad news. The good (or, mostly good) news: You’ll still be able to watch your purchased movies and TV shows on the YouTube app, which will also be your home for renting and buying more videos via Google.

Once you install the YouTube app for Roku or LG, Samsung, or Vizio TVs (assuming you haven’t already), just log in, go to the Library tab, then click on Your Movies and Shows. Once there, you should find all your purchased videos waiting for you.

Besides all your purchased Google Play videos moving over to the YouTube app, your Movies Anywhere titles should be available via YouTube, as well. (All my Movies Anywhere videos were present and accounted for.)

Your Google Play credits will also be good on the YouTube app, as will Play Family Library purchases. That said, any videos you buy on YouTube won’t support family sharing, although purchases on the Play Movies & TV website or mobile apps will. (Confused yet?)

One significant Google Play Movies & TV feature that won’t be making the move to the YouTube app are Watchlists. That means you’ll need to recreate your Watchlists as YouTube Playlists.