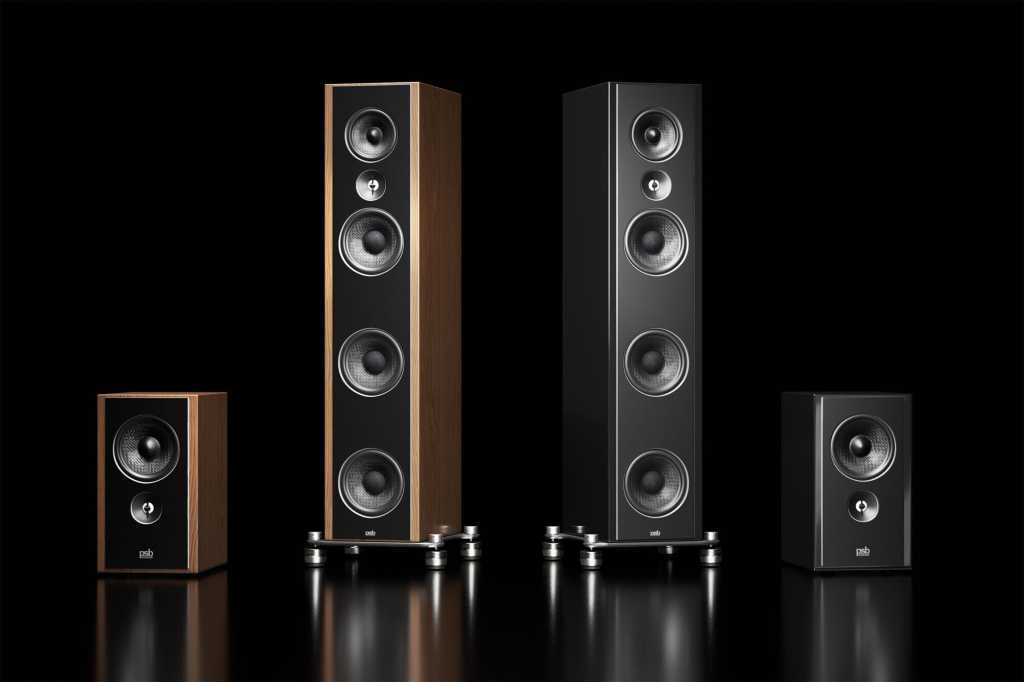 As the venerable Canadian speaker maker PSB approaches its 50th anniversary next year, the company just announced the return of its flagship Synchrony series with two new models: the T600 tower and B600 bookshelf. As founder and chief designer Paul Barton noted during an online press briefing, “evolution” and “refinement” are the watchwords for the new speakers.

The T600 is what PSB calls a “transitional 3-way” design with a 1-inch titanium-dome tweeter mounted below a 5.25-inch carbon-fiber cone midrange, both placed above three 6.5-inch carbon-fiber cone woofers that join forces at the lowest frequencies and gradually drop out one by one as the frequency increases. Each woofer occupies its own bass-reflex chamber with rear-facing ports, and each chamber is roughly the same volume. It has a specified on-axis frequency response extending from 30Hz to 20kHz (±1.5 dB) and 24Hz to 23kHz (±3 dB), a sensitivity of 91dB in a listening room, a nominal and minimum impedance of 4 ohms, and a recommended power rating from 20 to 300 watts.

Meanwhile, the B600 is a 2-way design that uses the same 1-inch titanium-dome tweeter mounted below one 6.5-inch carbon-fiber woofer in its own rear-ported chamber to achieve a frequency response from 55Hz to 20kHz (±1.5 dB) and 50Hz to 33kHz (±3 dB). Sensitivity in a listening room is 88dB, nominal impedance is 6 ohms (minimum 4 ohms), and the recommended power rating is in the range from 15 to 150 watts.

The woven carbon-fiber midrange and woofer are new for PSB, providing low mass and high stiffness. In addition, a new magnet structure in the woofer includes ceramic and neodymium magnets and an aluminum Faraday ring that is said to greatly reduce odd and even harmonic distortion. The tweeter is based on the one used in the Imagine series with a new phase plug that offers better dispersion and control of the breakup modes.

Both models feature a 5mm black anodized-aluminum baffle that is secured to the cabinet using “iso cups,” shock absorbers that decouple the baffle and drivers from the cabinet, essentially eliminating vibrations from being transferred between them. In addition, these speakers have more cabinet bracing than previous models, and they come equipped with special isolation feet from IsoAcoustics that provide a high degree of decoupling from the surface on which they sit while resisting lateral movement and oscillations.