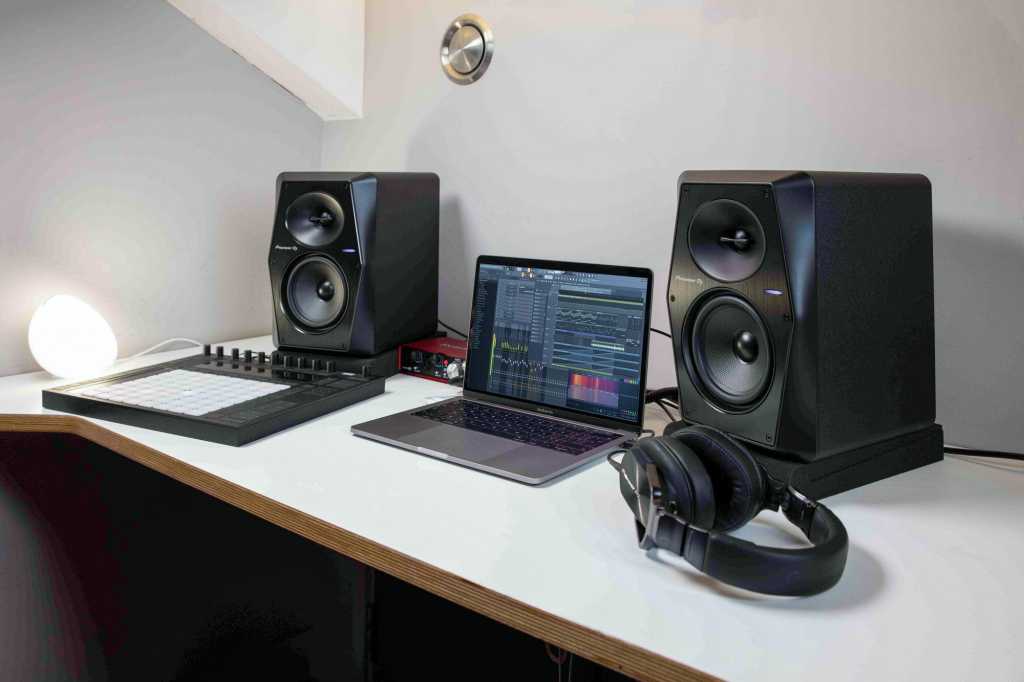 TechHive doesn’t typically cover monitor speakers—powered or otherwise—but Pioneer DJ pitched its new VM series as versatile powered speakers good for both work and play. Intrigued, we kicked the the tires on a pair of the middle-of-the-range VM-70.

It didn’t take long to conclude that these speakers deliver very good performance in both categories, and without the high price tag usually associated with speakers that are accurate enough for content creation. That’s not to say they’re inexpensive; the VM-70 cost $229 each (they’re sold individually, not as a pair). But they deliver on Pioneer’s promise of a pleasant experience whether creating (mixing) or recreating.

Whether you’re talking bookshelf studio monitors or speakers for general listening, 7-inch-class woofers (6.5-inch, in this case), such as the Aramid-fiber examples found in the VM-70, tend to provide just the right amount of bass—a Goldilocks level, if you will. And by the right amount, I mean the most accurate rendering of what’s in the audio signal.

The VM-70 are two-way speakers, so they’re also outfitted with 1-inch silk dome tweeters, crossed over at 3kHz. The speaker’s entire frequency range is 37Hz to 36kHz—which at the top end is about 16kHz higher than the average human can hear.

Signal processing is done at 96kHz, which is plenty quick enough for accurate filtering and such. Faster sampling rates can deliver superior sound, but it’s not because that rate captures or reproduces higher frequencies; rather, it’s the lower latency and faster processing that delivers the superior results.

The VM-70, and its stablemates—the smaller VM-50 and the larger VM-80—offer the most common inputs: a balanced XLR/quarter-inch TRS (tip/ring/sleeve) combo and honest-to-goodness RCA. The latter connection is to enable recreational listening via unbalanced audio sources (i.e., typical consumer audio gear).

The VM-70 is a bi-amplifed speaker, meaning one Class D amp on each speaker delivers 70 watts of power to the woofer, and a second Class D amp provides 30 watts to the tweeter. There are four DSP (digital signal processor) settings each for bass and treble that roughly, if not precisely, translate to flat and up to 3dB roll-off or boost. You can see the tweaked curves in the image below.

These speakers will automatically go into standby mode when no active signal is present to save power, although you can disable that via a switch on the back of the speaker, as shown above.

As I theorized before listening to them, the VM-70 hit the sweet spot for bass reproduction on the head. For my main testing, I left the woofer DSP at the default setting (L2/flat) and cranked the high-end up a notch to H3 and even H4. That was just to brighten things up a bit and guard against my tendency to over-emphasize high frequencies when mixing my own stuff.

I liked the result quite a bit. The big-dog ability in speakers (especially studio monitors) is the capacity to accurately render individual instruments in the sound field. I was easily able to discern them with the VM-70; and to be honest, I thought I picked up differences in compression better than with my usual Yamaha H8 studio monitors. Put another way, the VM-70 are very accurate. I could get picky and complain just a tad about the upper midrange needing a slight boost, but that would be it.

After playing my test files and noise files, I played with all the low and high DSP/EQ settings. No matter what I wound up with, the result was musically pleasing. If you’ve ever gone wild with EQ, you know this is not necessarily an easy thing to accomplish. Good job, Pioneer.

Anyone who’s ever switched speakers knows there’s always something missing. Quite often it’s something in the listener’s head. I might not trade my Yamaha HS8’s for the Pioneer DJ VM-70’s, but if I had the VM-70’s, I doubt I’d trade them for the HS8’s. As I said before, I could mix and/or listen to these speakers all day long.

The Pioneer DJ VM-70 deliver the lion’s share of the sonic goodness that more-expensive competitors provide: Versatile EQ and all the connections you need for normal listening, club use, or mixing.

I can recommend the VM-70 for general listening and for recording and mixing. While I haven’t listened to its bookends, I would guess you could easily employ a pair of the lower-priced VM-50, with their 5.25-inch woofers, for dialog-heavy video editing. And the VM-80 (8-inch woofers) undoubtedly deliver a bass-ier result that might be more appropriate if you’re DJ’ing a party. Whichever flavor you choose, I suspect you’ll be pleased.