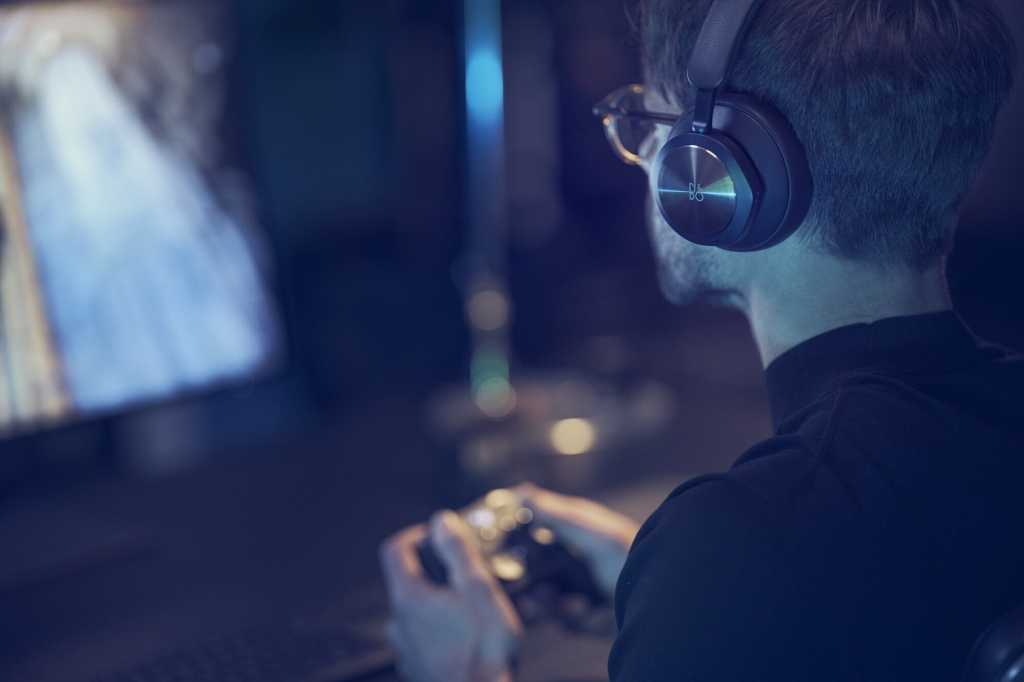 Audiophiles and road warriors addicted to Xbox gaming no longer need to accept any compromises in audio performance or noise cancelling thanks to this high-end headset.

Bang & Olufsen—B&O—is about to turn the headphone world on end with the launch of its Beoplay Portal, a high-end noise-cancelling headphone whose meticulous industrial design, pristine audio performance, and underlying technology make it the first premium headphone that will easily satisfy the audiophile, the road warrior, and the hardcore gamer with a single product.

B&O sent me a review sample in time for me to publish this review on the day of the $499 Beoplay Portal’s global debut—and I loved it. But before I get too far ahead of myself, let’s see why you might want to put the Beoplay Portal on your headphone short list.

The Beoplay Portal represents the pinnacle of B&O’s legendary industrial design. My review sample came in black anthracite, but the Portal is also available in grey mist and navy.

Lifting the Beoplay Portal out of the box is a sensory-confounding experience. Your eyes see an aluminum and leather-wrapped headphone that you know from experience should have density and weight; but your tactile senses hold something that is impossibly light at a mere 282 grams (9.95 ounces).

Everything about the Beoplay Portal screams high end. The top of the headband is covered in a gorgeous, durable cowhide, while its memory-foam earpads are wrapped in genuine lambskin. The ear pads are thicker than I’ve seen on other B&O headphones I’ve reviewed, creating a deeper cavity for your ears. They’re also tapered and provide an extra tight seal all around your head.

I’ve been constructively critical of past generations of B&O headphones for being uncomfortable to wear for long listening sessions, but that’s not the case here. B&O wrapped the underside of this headband with a bamboo-fiber textile that is both durable and breathable. Gone are the days when a B&O headphone would cause me fatigue or pain from the top of its headband. The Beoplay Portal features a unique offset padding to relieve any pressure on the top of your head. In fact, when you look at the headband, you’ll see the offset as a slight V-shaped notch at the headband’s midpoint. I spent hours and hours wearing the Portal—including falling asleep while wearing it—with no discomfort whatsoever. Kudos to B&O’s design team.

The Beoplay Portal’s brushed-aluminum arms expand—no, glide—with a smoothness that I’ve not experienced with any other headphone. It’s pure butter. There’s no clicking, no stuttering of any kind. Let the arms go and voila, they lock solidly into place like pure magic.

The aluminum discs on each ear cup exemplify B&O’s focus on form and function. Light seems to dance across them; and on closer inspection, you’ll notice that the light spreads into a subtle colored gradient. In low light or gaming environments rich with color LEDs, you’ll be drawn to the eye-catching effects the materials create. B&O told me the company used a proprietary anodization technique it first developed for its Beosound One NY Edition loudspeaker.

As with previous-generation B&O headphones, the discs have a functional aspect too. Tap twice quickly on either ear cup to pause and twice again to play. If you’re on a call or using the Portal in conjunction with Zoom or Teams, tapping twice mutes/unmutes the call.

Oddly, the Portal does not come with any sort of carrying case. B&O typically accessorizes their headphones with a luxurious carrying pouch of some sort, but not here.

The Portal sports Bluetooth 5.1 and multipoint Bluetooth. You can add up to eight devices and have two devices paired at a time. Note that gaming connections take priority.

Each ear cup features a vertical Touch Bar that is (in my opinion) one of the most outstanding features of the Portal and is, for now, unique to this headphone. Once you use the Touch Bar, you’ll never want to go back to buttons or gesture-based controls. This vertical bar is mounted flush on the left and right ear cup, with a small bump at the end that orients you to the sliders’ boundaries. The right slider controls the headphone’s volume. Slide your finger up to increase volume and down to decrease. The left slider controls the Portal’s adaptive noise cancelling and transparency. Slide up for transparency and down for ANC. When you’ve hit the limit of either, the headphone will give you a distinct, gentle prompt.

The most brilliant part is the fine-tuning B&O has performed. Not only does sliding your finger up or down feel completely natural but the speed at which the volume increases or decreases is Goldilocks perfect—and it worked every time. I tried to see if I could get the Touch Bar to misfire by laying down on a pillow or rubbing my head on a headrest. The Portal would have none of it.

Active noise cancelling is a modern marvel; but when done wrong, it can wreak havoc on a headphone’s sonic performance. In my experience, B&O has never had the best noise cancelling performance, but they’ve always delivered superior sound thanks to their tuning. The Portal improves upon the company’s ANC performance while maintaining a high bar for audio reproduction. You won’t hear any overt hiss, and the underwater effect that so many competitors suffer from is not a factor here. My review unit had two strength settings for transparency, and two for adaptive noise cancellation. A B&O representative told me a future firmware update will increase this to five gradients for each, allowing you to fine-tune each setting to your environment and preference.

With ANC enabled, the Portal provided a black background from which music burst. I tested this headphone in the presence of noise generated by HVAC systems, boilers, air purifiers, and more. In each instance, these cans did a superb job of reducing ambient noise so I could focus my attention on the music. I did not, however, have an opportunity to evaluate B&O’s new ANC algorithm on an aircraft. And all that said, Sony and Bose—in that order—still do active noise cancellation even better.

The Portal comes with a 3.5mm analog cable and a 6-foot USB-C to USB-A cable that does double-duty as a charger and as a digital audio transport for a computer, smart device, or gaming console. I found out the hard way, however, that you can only use the Portal as an active headphone. If its battery runs out, you can’t switch to the 3.5mm analog jack and use it like a plain ol’ headphone.

Built with gamers in mind

Gamers—particularly Xbox owners—will dig the Beoplay Portal because it takes advantage of Microsoft’s protocol for stable, low-latency, uncompressed, wireless audio with an Xbox Series S/X or Xbox One. Plug Microsoft’s $25 Xbox Wireless Adapter for Windows 10 into your Windows 10 computer and you’ll get the same support on that platform. Should you want to use the headphone with a mobile Android device, there’s support for the aptX Adaptive codec via Bluetooth. The AAC and SBC codecs are also supported.

Bang & Olufsen has replaced one of the most ubiquitous features of gaming headsets—the boom mic—with what it calls the “virtual boom arm.” Instead of mounting a single mic on the end of a flexible stalk, the Portal uses an array of microphones that use directional beamforming technology to isolate and amplify your voice while screening out background noise. Whether you’re trash-talking an opponent, making a phone call, or participating in a video conference, your voice will come through clear as crystal. And a feature called “Own Voice” will use the Portal’s mics to pipe your own voice through the headset, eliminating a common annoyance with headsets of all types.

I did, however, experience an occasional anomaly with my iPhone 12 that I couldn’t quite pin down. When lifting/shifting one of the ear cups off my head and placing it back again, people on the other end of the call could no longer hear me unless I broke and then restored the wireless connection to my iPhone.

B&O was not able to provide me with the latest version of its mobile app, which has been updated with unique features for the Beoplay Portal. But I did get a one-on-one briefing as to what you can expect from the updated software. Once you pair the Portal to the Bang and Olufsen app, you’ll have the option to activate one of three gaming DSP modes: Gaming, FPS (first-person shooter), and RPG (role-playing game). It was inferred that more gaming DSP modes will become available down the road. In the meantime, you can create custom EQ profiles of your own. In case you’re wondering, the Portal does not feature audio head tracking.

The Beoplay Portal headphone sounds glorious. If you’re a fan of B&Os voicing—a crisp top end, a pristine midrange, and a tight bottom end—you’ll experience it in full here. I used a combination of high-res music files and streamed content via Tidal, all played through my Roon Nucleus media server.

The near sub-sonic bass lines on Bonnie McKee’s “Trouble,” Sade’s “Soldier of Love,” and Natasha Bedingfeld’s “These Words” were exceptional. B&O’s balance between killing outside noise and delivering intoxicating musical reproduction is among the best I’ve heard. Switching between various ANC modes, I could barely discern any impact on the music whatsoever. Unlike some of the competition, whose ANC will dull the top end or muddy the midrange, there was none of that with the Portal.

The Bang & Olufsen Beoplay Portal is a triple-threat wireless headphone that everyone can love: The discerning music listener, the road warrior looking for sonic isolation on the go, and the hardcore gamer rocking the latest console or PC hardware. The Portal really can do it all: Entertainment, relaxation, and productivity. But what seals the deal for me is the head-turning design, luxurious feel, and that killer Touch Bar volume control.