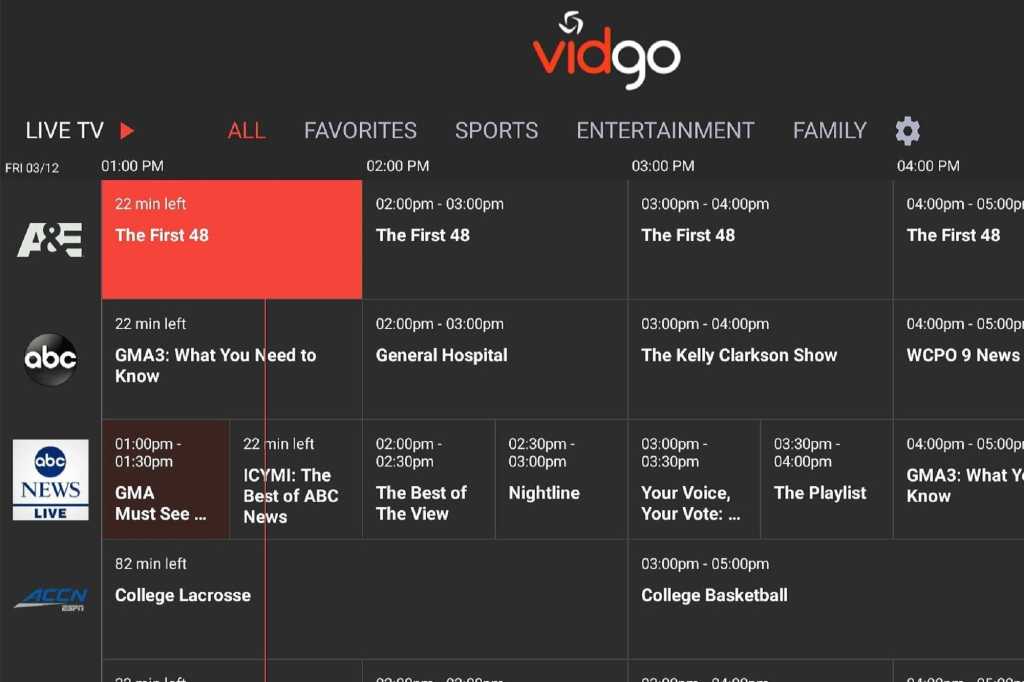 Vidgo’s mix of sports channels might scratch a few itches, but not without major drawbacks.

In a way, Vidgo is a reminder of what live streaming TV used to be.

At $55 per month for a mix of news, sports, and entertainment channels, it’s less expensive than your average cable bundle, and it undercuts several other live streaming services, including YouTube TV and Hulu + Live TV.

But much like the early years of live TV streaming, Vidgo’s savings don’t come without big sacrifices. Its apps are crude, its DVR is nonexistent, and the service has some major holes in its lineup. Most cord-cutters who want a drop-in replacement for cable should spend a little more to get YouTube TV or its ilk. Still, if the goal is to get specific channels for as little as possible, Vidgo might scratch a few itches.

This review is part of TechHive’s coverage of the best TV streaming services, where you’ll find reviews of the competition’s offerings, plus a buyer’s guide to the features you should consider when shopping for this type of service.

For $55 per month, Vidgo offers roughly 80 live TV channels, which you can watch on Roku players, Fire TV devices, Android TV devices, Apple TV, Chromecast, iOS, Android, and the web. (As of this writing, Vidgo also gives new subscribers a rate of $10 per month for their first two months.) The service lets you stream on up to three devices at a time.

The selection of sports channels is fairly strong for the price, including ESPN, FS1, FS2, ACC Network, NFL Network, NFL Redzone, Big Ten Network, and Longhorn network. As with most other live TV streaming services right now, Vidgo lacks regional Fox Sports channels, but the sports channels it does have would cost at least $65 per month with other bundles, or more in the months where you’re watching Redzone.

Vidgo includes dozens of other news and entertainment channels as well, including Fox News, HGTV, Discovery, and Nickelodeon, and it has local channels from ABC and Fox. (A full channel list appears at the bottom of this review.)

Of course, the reason Vidgo undercuts some other bundles is because doesn’t have carriage arrangements with several major TV networks. No deal with NBC means no MSNBC, CNBC, Syfy, or local NBC stations. No deal with WarnerMedia means no TNT, TBS, CNN, or TCM. Local CBS channels are absent from the service as well.

But again, that’s part of the appeal. While other bundles have opted to pack in more channels at higher prices, it’s somewhat refreshing to see Vidgo provide an alternative that costs less because it doesn’t cover all bases.

For live TV, Vidgo provides a basic grid guide similar to what you’d find on a cable box. You can also mark channels as favorites or filter live channels into genres, including sports, entertainment, and family programming.

But unlike every other live TV streaming service available today, Vidgo does not offer cloud DVR with its service. Instead, you’re limited to watching live programs and anything that aired in the last 72 hours on many channels.

Using Vidgo’s apps, it’s clear that on-demand content isn’t the focus. To see a list of previously aired programs, you can either scroll back in the grid guide or select a single channel and scroll through an ungainly list of movies or shows. You can’t sort content by show or season—perhaps because so little of it is available on demand—or browse across channels by genre, and while the app does offer a search function, it’s limited to searching by show or channel name. I also experienced one occasion where an on-demand program refused to play, showing an error message on a Roku player and an endless loading message on a Fire TV Stick.

Vidgo says it plans to add DVR service and a proper on-demand catalog in the future, but in my experience, DVR has been a difficult thing for live TV streaming services to get right. I wouldn’t bank on Vidgo’s promises until we can see how it works in practice.

In the meantime, the best way for Vidgo subscribers to watch on-demand video might be to not use Vidgo’s apps at all. Because the service supports TV Everywhere, you can log into individual network apps to watch their on-demand catalogs. A $5-per-month service called Stremium also allows Vidgo subscribers to get DVR service through a separate app, while users who are more tech-savvy can also hook their Vidgo credentials into Channels DVR, an $8-per-month service that lets you record live channels onto a local hard drive. Those alternative approaches make Vidgo a more compelling service, but they also add to the overall price and introduce new complexities.

Vidgo’s on-demand and DVR issues speak to a broader lack of refinement in the service’s apps.

On Fire TV devices, for instance, you can’t scroll through channels in the guide at future times, because clicking up or down always takes you back to the current time. The Fire TV app’s mini-guide also doesn’t let you filter by genre while you’re watching a channel, and it doesn’t remember your place in the guide if you close it and open it again.

Roku’s version of the mini-guide works better, as it includes filtering options and remembers your spot, but it has its own annoyance: Hitting the back button exits live TV entirely, rather than closing the guide as you’d expect. Vidgo also refused to play in Microsoft’s Edge browser for Windows 10, throwing up an error message saying to use a different browser instead.

The other issue with Vidgo is its lack of 60-frames-per-second video support on certain channels. While I experienced those smooth frame rates on ESPN channels, Fox Sports channels, and Fox News channels, others I tried were limited to 30 frames per second.

For entertainment content, that’s not a problem, but replicating the cable experience for live sports really requires the smoothness of motion that comes from 60-frames-per-second support. Running into choppier video on NFL Network and PAC-12 channels was a disappointment.

The strangest thing about Vidgo isn’t the particulars of its lineup or its unpolished interface, but rather its foray into “social” TV. Load up Vidgo’s mobile apps, and you’ll be encouraged to create reaction videos, post polls, or create watch parties with your friends.

While the virtual “Watch Together” craze has clearly gained traction during the coronavirus pandemic, it feels needlessly tacked on here. Most of your pals probably aren’t subscribing to Vidgo, and there’s no way for them to tune in without a subscription. Vidgo’s mobile app does offer a feature for communal YouTube viewing, but other apps like Rave and Airtime offer the same feature without Vidgo’s baggage.

Vidgo’s streaming TV apps don’t offer any of these social features, so they’re easy enough to ignore while watching on an actual television. But the fact that they exist at all makes me wonder if Vidgo has its priorities straight. Given the service’s rickety apps and missing DVR features, the company’s priorities would be better focused elsewhere.

Vidgo’s various downsides ultimately leave it with a narrow audience. YouTube TV, Hulu + Live TV, and FuboTV all offer many more channels, slicker apps, and comprehensive DVR features for just $10 per month more. Cheaper services like Sling TV ($35 per month) and Philo ($20) make deeper cuts in their lineup for the sake of saving people even more money.

Vidgo, meanwhile, occupies an awkward middle ground. It’s an inherently niche service due to its channel lineup, and it has a lot of work to do on making its apps and experience better.

In any case, I do hope its lineup doesn’t significantly change. The last thing we need is yet another live TV streaming service that becomes more bloated and expensive over time by trying to appeal to everyone’s channel needs.