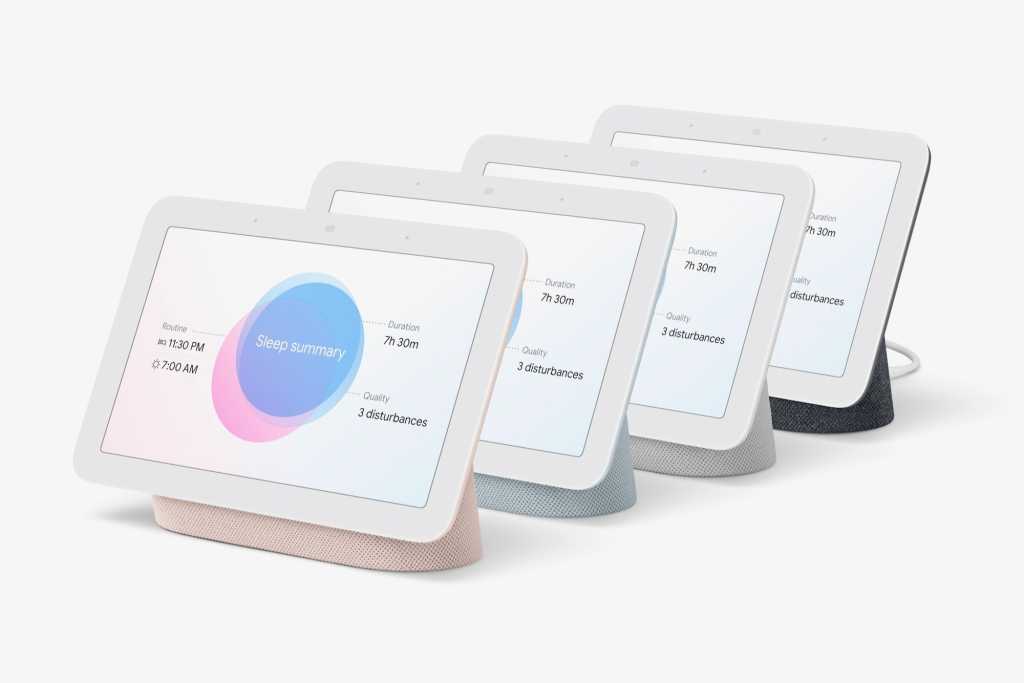 For its second-gen Nest Hub smart display, Google shied away from a radical redesign; so no, don’t expect a motorized screen or anything. Instead, Google opted to refine rather than revamp some of the Nest Hub’s existing features, including its audio quality, while adding a new one: the ability to track your sleep.

Available now for preorder, and slated to ship on March 30 for $99, the new Nest Hub looks almost identical to the original. And just like the first Nest Hub, this new version lacks a camera. That said, there are a couple of minor cosmetic changes.

For starters, the Nest Hub now has an edgeless glass display, which should make the 7-inch screen easier to clean.

Also, the Nest Hub will be available in a new color—mist—along with three existing ones, including chalk, charcoal, and sand.

Machine-learning chip and a Thread radio

Inside, the second-gen Nest Hub adds a new machine-learning chip similar to the one in the 10-inch Nest Hub Max and last year’s Nest Audio speaker. The on-device chip should help Google Assistant learn your favorite commands and respond more quickly to your queries, Google says.

But the Nest Hub’s hardware highlight is its new Soli chip, which Google describes as a miniature, low-power radar.

The Soli chip isn’t entirely new to Google smart displays. Already installed on the Google Nest Hub Max, the Soli chip enables such features as presence detection, which (for example) alters elements of the interface when you’re in proximity. The chip also allows the display to detect simple gestures; for example, you can pause or resume music playback simply by raising your palm.

Now that it has a Soli chip, the smaller Nest Hub will have the same presence-sensing and “Quick Gesture” abilities as its larger sibling. But Soli also enables an intriguing new feature on the latest Nest Hub: Sleep Sensing, which (as you probably guessed) can sense how well you sleep.

Sensitive enough to detect your chest moving while you’re lying in bed, the Soli chip-enabled Nest Hub can monitor your sleep without the need of a fitness tracker on your wrist.

The Nest Hub will also detect other factors that could disturb your sleep, including coughing and snoring. The display’s ambient light sensor will report whether there’s too much light in the room while you’re sleeping, while a new temperature sensor will sense whether your bedroom is too warm or cold.

Each morning. the Nest Hub will generate a report telling you how long you slept, whether you went to bed and got up on schedule, and how restfully you slept. Google said it has even tested its sleep-monitoring tech with people who wear a CPAP mask as a sleep apnea therapy. Meanwhile, Google Assistant will offer tips based on your sleeping history and even suggest new automations, such as lighting and “relax” routines. You can also export your sleep data to the Google Fit health app.

An initial, 90-second calibration process will help you orient the Nest Hub properly (it should be placed near your bed, ideally on a bedside table) while allowing the display to create a “tracking bubble” around your usual sleeping position, thus filtering out any partners or co-sleepers. It’s worth noting that the Nest Hub only tracks one sleeper at a time, which means that if your partner wants their sleep tracked as well, they’ll need their own Nest Hub.

As far as privacy goes, Google says that the Nest Hub only detects motion, not “specific” bodies or faces, and that raw sleeping data is stored and processed directly on the device, not in the cloud. You’ll be able to delete some or all of your sleep data; likewise, you can partially or completely disable Sleep Sensing.

The Nest Hub’s Sleep Sensing feature will be available on the Nest Hub as a “free preview” until next year, according to Google.

So, what happens after the free preview? Good question. Google declined to go into specifics during an online briefing last week, but a rep said that Google is “actively exploring opportunities” to integrate with Fitbit, the fitness-tracking company that it acquired in 2019. Presumably, those opportunities could include a subscription fee for Sleep Sensing functionality. “We’ll update users and give them plenty of updates ahead of time if the current offering is going to change,” the rep added.

Speaking of price, the second-gen’s $99 price tag is $50 lower than the initial price tag for its predecessor, which was dubbed the “Home Hub” back in 2018. A year later, Google cut the display’s price to $129 and renamed it the Nest Hub (in line with Google’s “Nest” branding for its smart devices), while a further, more recent discount brought the display’s price tag down to $89.

We’ll have a full review of the Nest Hub once we spend quality time with a review unit.