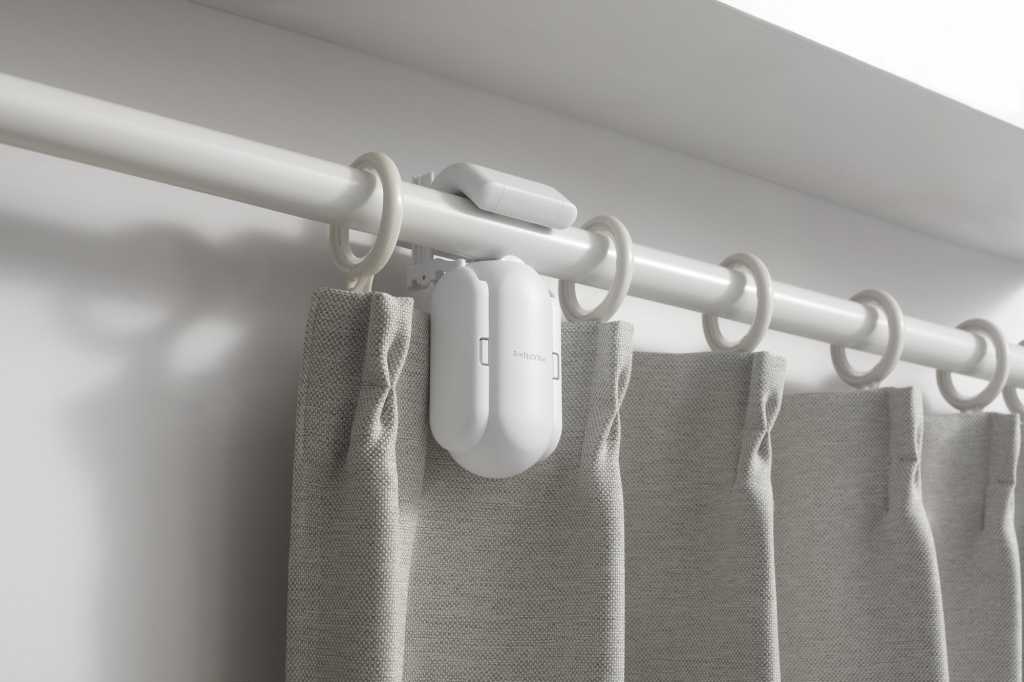 Image: SwitchBot
At a Glance

This easy retrofit device turns almost any curtain into a capable smart system.

Options abound for motorizing and smartening up blinds and shades, but what if you have curtains? Rendering those hanging panels of fabric into smart window coverings presents such a particular challenge that only a handful of options exist—and most of those require you to install a special motorized track.

SwitchBot is the only exception I’ve seen. It’s an add-on device that (with some caveats) promises to turn any existing curtains into smart curtains with minimal amount effort and setup. As smart tech goes, SwitchBot isn’t the most elegant of products. It’s a squat, egg-like device that hangs beneath your curtain rod (it supports rods measuring between 15- to 40mm in diameter) and nestles between the tabs, rings, or grommets of your curtain. A mechanical wheel presses up against the bottom of the rod and allows the SwitchBot to move left and right, dragging the curtain along with it. While the standard version is designed for cylindrical curtain rods, other versions are available for I Rail and U Rail tracks.

To get started with SwitchBot, you create an account in the SwitchBot app, then add your SwitchBot Curtain to it. It’s a Bluetooth-only device, so wireless setup is fairly quick. What takes a bit longer is when the app walks you through questions about your hardware, the design of your drapery rods, and the style of the curtains themselves. Finally, you’re instructed to place the controller on the rod, a process which couldn’t be simpler. A small button removes the top piece from the unit’s two arms. Once you align the device on the rod, you simply slide that top piece back into place, gripping the rod between the two halves as it locks into place automatically.

SwitchBot claims a 30-second setup time, which is true if you’re only counting the time that last step takes, and none of the other setup work. My curtains particularly took some extra effort, as they hang from the rod via fabric tabs. These had to be reinforced with small plastic clamps (included in the box); essentially, so the SwitchBot wouldn’t run over the fabric as it moved back and forth.

Once configured, I found the product to work well. After a calibration step, it is easy to manually open and close curtains exactly to the point you want, set up timers to automatically close at night and open in the morning, or open/close the curtains based on a countdown delay timer. The system offers two speed modes, but I found the “silent mode” to be much more invasive than the faster “performance mode,” which was particularly made worse because of how long it took to complete the circuit. The SwitchBot also detects external movement. The “touch and go” feature understands if you’re attempting to manually open or shut the drapes and, once you get it started, it finishes the job for you.

SwitchBot won’t work perfectly for everyone; if you have very heavy curtains (more than 17 pounds), its little motor won’t be able to keep up. It also doesn’t work well with the telescoping kind of curtain rods that have a thinner rod nested inside a thicker one, though an adapter in the box is provided to help it across such transitions.

The device includes a rechargeable battery that charges via the included USB-C cable. If you don’t want to periodically recharge it, you can help it stay topped up by adding on a small solar panel ($25) that stays permanently plugged in—although this will really stand out if your curtains (like mine) don’t exactly hide the SwitchBot hardware (as you can see in the photo above. The marketing photo up top shows the SwitchBot hanging in front of the curtain, but that’s just so you can see it.)

SwitchBot isn’t perfect. It’s loud and it’s simply not attractive, but it does do the job it promises to do, and it does it well at a reasonable price. I haven’t had a moment of trouble with the SwitchBot since I installed it, and despite some minor complaints I can happily recommend to anyone who hates getting out of bed on a cold morning to let some light in.