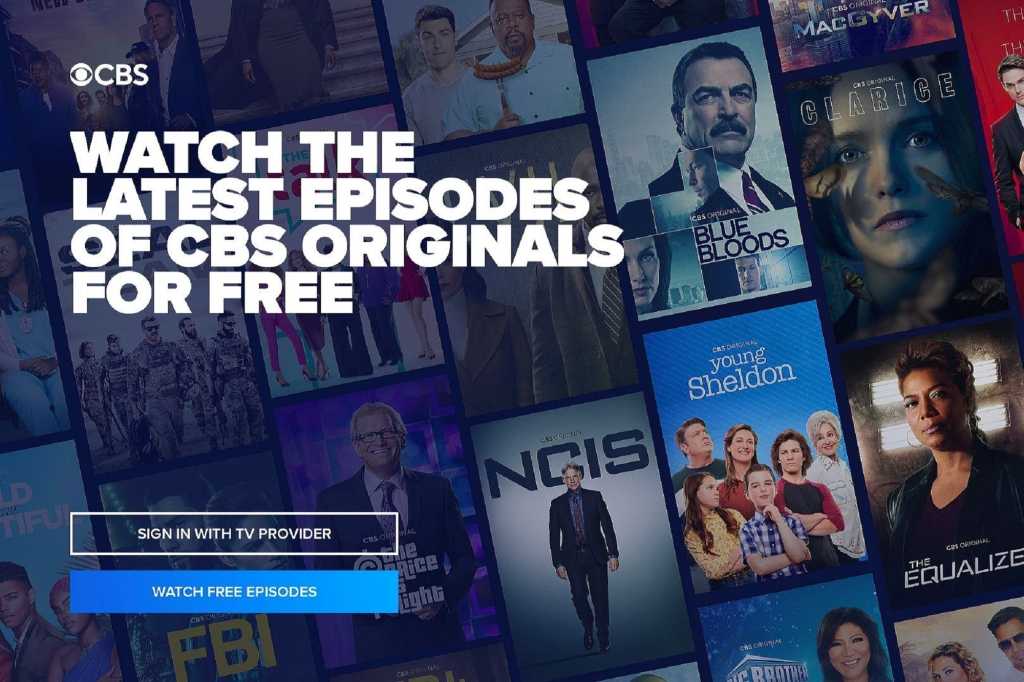 With last week’s launch of Paramount+, one could almost hear the collective groan from cord-cutters. Much like Disney+, Apple TV+, HBO Max, and NBC’s Peacock, it represents yet another streaming service to think about paying for.

While the launch of Paramount+ got all the attention—perhaps undeservedly, given that it’s just a rebranded CBS All Access—the bigger news slipped under the radar: Parent company ViacomCBS also launched a separate, standalone version of the CBS app. Unlike both Paramount+ and CBS Access before it, the new app lets you watch on-demand CBS shows for free. (In fact, it was the best place to watch Oprah Winfrey interview Prince Harry and Meghan Markle without cable.)

For years, free network TV apps from NBC, Fox, ABC have felt like one of the best-kept secrets in streaming. Now that CBS has joined them, you can watch new shows from all the major networks without paying a dime.

Technically, CBS was offering free episodes of its network shows before, but only on the CBS website and CBS mobile apps. Although you could send video from those apps to Google’s Chromecast dongles, you couldn’t watch CBS shows on other TV devices without using the CBS All Access app instead. That in turn required either a $6-per-month subscription or a login with a pay TV provider.

The new CBS app for Roku, Fire TV, Android TV, and Apple TV is completely separate from All Access (now Paramount+) and allows you to watch recent episodes for free. You can also still use CBS’s iOS and Android apps to play videos on a Chromecast.

Once you’ve downloaded the app, just select “Watch free episodes.” You’ll get to watch new shows like Clarice, the latest episodes of Late Show and Late Late Show, new editions of 60 Minutes, and more. There’s also a live section where you can watch the CBSN news channel, CBS Sports HQ, and ET Live.

Of course, there are catches: Some new episodes of CBS shows have an eight-day delay before you can watch them for free. They also have commercial breaks, and each series only offers a handful of recent episodes.

If you subscribe to a pay TV bundle that includes CBS, you can sign in to remove the delay, access more episodes from each series, and watch your local CBS channel. Otherwise, you’ll need to stay on top of things (or use a recording service like PlayOn) to avoid missing any episodes.

Still, it’s nice to see CBS fall in line with other major networks, which have been streaming full episodes of their newest shows at no charge for years. By adding the CBS app alongside Fox Now, the NBC app, the ABC app, the CW app, and PBS, you can access a lot network TV content without paying for a bloated channel bundle.

The CBS app vs. Paramount+

Why pay $6 per month for Paramount+ when you can watch CBS shows for free?

With Paramount+, the goal is to offer a much broader service in which CBS is just one facet. It carries exclusive shows like Star Trek: Picard and The Good Fight, a back catalog of shows from ViacomCBS cable channels (Comedy Central and Nickelodeon among them), and new movies like The SpongeBob Movie: Sponge on the Run. The service also offers live streams of local CBS channels and older episodes of CBS shows, which would otherwise require a login with a pay TV provider. And if you pay for the $10-per-month tier of Paramount+, you can watch those shows without commercial breaks.

The strategy is somewhat similar to that of rival networks. NBC offers free shows in its NBC and Peacock apps, but also encourages $5-per-month Peacock Premium subscriptions for additional content. The ABC app provides plenty of new shows to watch, but also pushes people to pay for Hulu if they want more shows and older episodes.

At the same time, these companies are still reserving many of their popular shows for network TV. If you’re looking to maximize your savings as a cord-cutter, my advice would be to use these networks’ free apps—perhaps combined with an antenna or Locast for live TV—and only dip into their paid services on a one-month basis to binge-watch the best programming. It turns out you might not need yet another subscription after all.