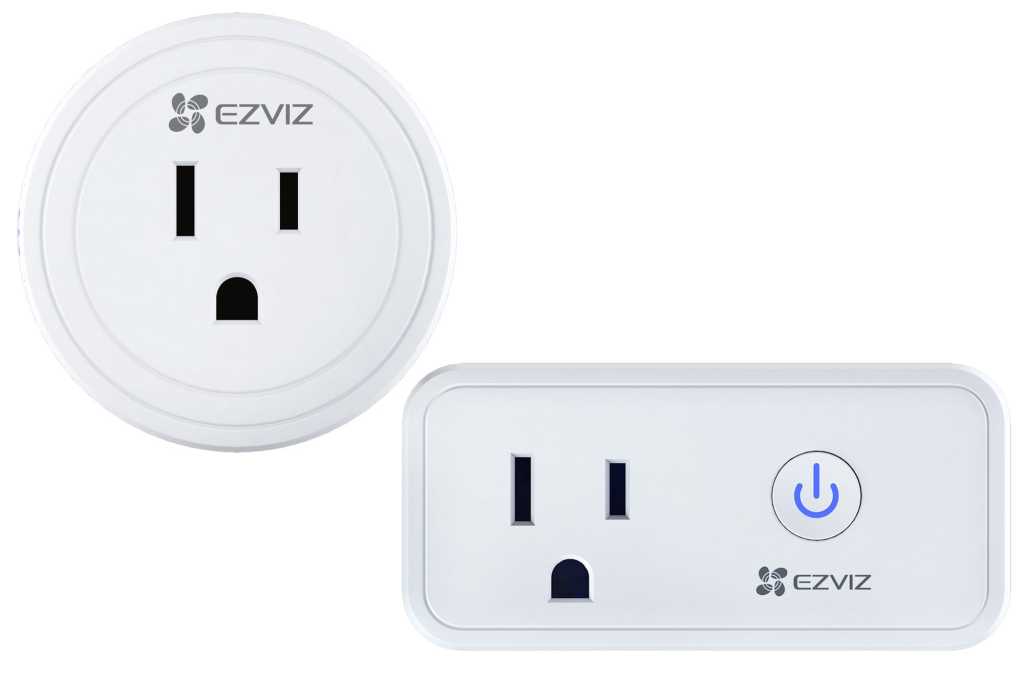 This inexpensive, generic, button-style smart plug is short on features and suffers from some operational issues.

EZVIZ is best known for its security camera lineup, and recently it expanded into other smart home gear; specifically, a pair of smart plugs you’ll soon find exclusively—for now—at Walmart.

The EZVIZ T30-10A-US and T30-10B-US differ in size as well as function, but only modestly. They’re both 2.4GHz-only Wi-Fi plugs, with the $15 T30-TA being smaller and round, measuring just over 2 inches in diameter. The $20 T30-10B is slightly larger, rectangular, and has its receptacle mounted off to one side. It measures nearly 3 inches wide by about 1.5 inches tall. The $5 premium over the cheaper device delivers an energy-monitoring feature to the mix. Neither will block the adjacent socket when plugged into a typical duplex.

The two plugs are otherwise essentially the same when it comes to both setup and operation: Both deliver a maximum of 10 amps of current and have maximum output power ratings of 1600 watts. Each one has a blue LED on its hardware power button, which can be disabled in software (the light, that is, not the button).

Setting up either T30 involves first downloading the EZVIZ app. Don’t be alarmed at the many options including “EZVIZ” in the name on the app stores. You want the one simply called “EZVIZ” with no trailing text. After creating an account, you’ll be asked to add your new hardware by scanning a QR code that is affixed to the plug via a rather inelegant sticker. Once you enter your home’s Wi-Fi password, the app largely does the rest behind the scenes, though this took a couple of tries when I was setting up the 10B. The 10A made it through on the first try.

The app is simple, but clearly in need of some polish. All connected devices appear in a vertical list on the home screen. A slider lets you turn power on or off here, while tapping the device name takes you to a screen with more advanced options, including a scheduling system (EZVIZ calls this “Timer”) and a countdown system that will toggle the plug on or off (whichever state it’s not currently in) after a preset length of time.

Note that these are simple on/off smart plugs, not dimmers. And strangely, rather than “on” and “off,” EZVIZ calls the plug’s power states “enabled” and “disabled,” which have somewhat different meanings in the mind of this reviewer. Even more strange is that when you try to turn the power off—or disable it, I guess—from the home screen, the app pops up a message saying “The device is working. It will stop working when disabled,” and then asks you to confirm your choice. I’ve never had to confirm my request to turn the lights off in any other app, but as far as I can tell, there’s no way to disable this “Are you sure?” feature.

A bigger issue is that the EZVIZ app doesn’t perform all that well. It is slow to update, prone to generating “Processing” notifications and a spinning status wheel, and often indicating the wrong status of lights until you refresh the page. Even simple on/off actions frequently and inexplicably fail and must be retried, sometimes more than once. There was no apparent rhyme or reason to these errors in my testing, though they were decidedly common.

The units both connect to Alexa and Google Assistant ecosystems, and I had no trouble setting up schedules and using voice commands to control both plugs with my Amazon Echo. As well, the 10B’s energy monitoring features are handy, if fairly basic, letting you see usage in the app by hour, day, or month. You can also gauge the outlet’s real-time draw.

Both plugs are priced slightly higher than even more-generic models, but that wouldn’t concern me if they were more responsive on the whole. As it stands, some updates to both software and firmware are in order for these units to merit stronger recommendations.