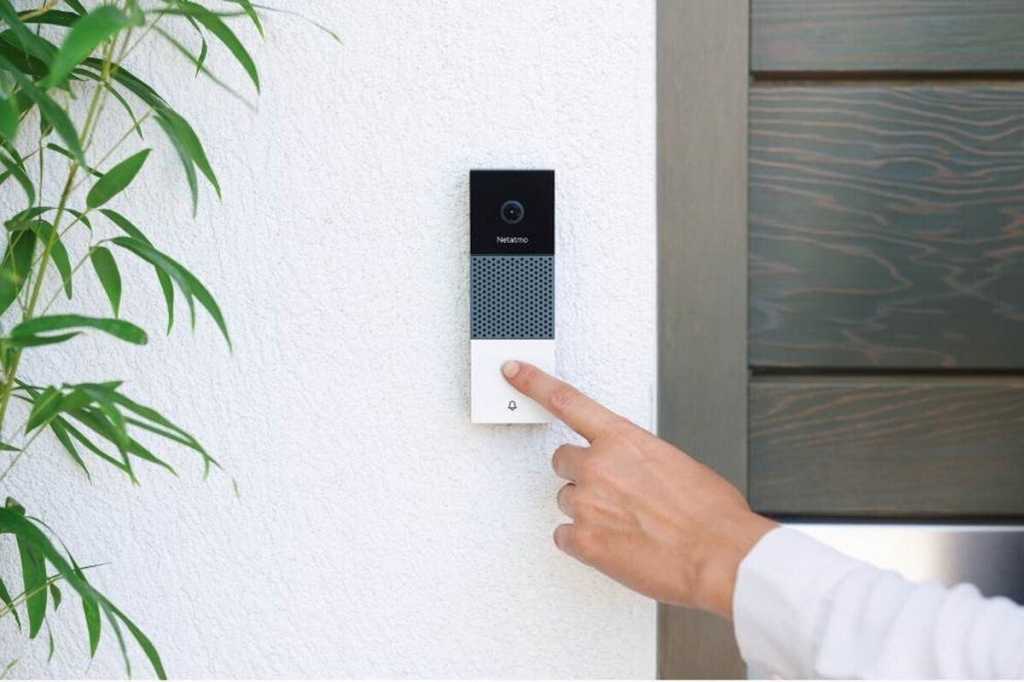 Image: Netatmo
At a Glance

The Netatmo Smart Video Doorbell doesn’t require a subscription for video storage, and it supports Apple’s HomeKit ecosystem, but it’s missing some important features for a premium product.

The Netatmo Smart Video Doorbell is the latest from one of Europe’s biggest smart home security product makers. It was first shown at CES 2019, so it’s been a long time coming. The product is now available in the U.S. for $300. That makes it much more expensive up front than many of its competitors, but it could easily work out cheaper over time because you don’t need to pay any subscription charges for cloud-based video storage or other services.

Netatmo’s device is larger than some competitors, but it has a smart design with the facia split evenly into three sections: the top is the camera, the center is the speaker, and the lower third is the doorbell button.

The Netatmo Smart Video Doorbell wasn’t the easiest to install. I don’t know if it’s because it accepts household electricity supply (as in common in some European countries), but installation requires feeding a couple of wires through the back of the bracket and then into a connector block. The connector block then attaches to the bracket. Why it isn’t a single piece isn’t clear.

The good news is that it accepts a wide range of voltages: from 8 to 24 volts AC and direct connection up to a 230V household supply.

The doorbell is also the first video doorbell I’ve encountered with a fuse. Netatmo supplies a fuse and a spare in the box, but I managed to blow both and had to visit the hardware store for a replacement. The problem was that I was attempting to install the doorbell without a wall chime, and a wall chime is required. If you try to install it without one, the fuse will blow.

The doorbell comes with a rather thick and well-produced instruction manual in English, French, German, Spanish, Italian and Dutch; unfortunately, it doesn’t warn that a chime is mandatory. Netatmo does have a useful online compatibility guide that you can use to verify that it will work in your home.

The mounting plate could also be a little better designed. Although I had no problems, several users in online forums have reported snapping the plate while tightening the mounting screws. The plastic that supports the screws is quite thin and should probably be a little thicker.

It is secured onto the base plate with a small security screw with a triangular head.

The 2-megapixel camera produced a good, clear image in a 9:16 portrait format. A section of the image, defined by the user, is shown in landscape mode on the Netatmo app’s main screen and it expands to full screen when selected. Netatmo says the field of view is 140 degrees and it features infrared LEDs for night vision.

It connects to a 2.4GHz Wi-Fi network and won’t work on a 5GHz network. The 2.4GHz frequency band offers longer range, but 5GHz spectrum is much less crowded.

When a visitor presses the doorbell button, it appears on the phone as an alert with the option to directly answer the call. You can then see and hear the person at the front door and talk to them through the app. The latency on it is good and there is minimal delay in the audio between both parties.

Compared to some other video doorbells, this one has limited detection settings. You can set a detection zone but that’s about it. The doorbell has a person-detection setting that does a good job of alerting when a person appears, and it ignores everything else.

Not once did it alert me when a car or animal entered my driveway. That’s not necessarily a bad thing. Sometimes I end up struggling with too many alerts; but if you are relying on the doorbell to also act as a surveillance camera, be aware that you’ll only get alerts for people.

Privacy is one of my favorite features of Netatmo’s home security products. The Smart Video Doorbell, like all the company’s camera products, records images to internal memory. All the video is recorded to a microSD card, which means it’s not in the cloud and there are no monthly subscription prices. Users can add a Dropbox or FTP server link for online video storage if desired.

Smart home support is limited to Apple’s HomeKit and even then it’s a limited feature set: the camera can be called using Siri, viewed from the Home app, and used to trigger scenes or lights. HomeKit Secure Video isn’t supported out of the box but Netatmo says it will be offered in the future as an update. There is no support for Amazon Alexa or Google smart home features.

The Netatmo Smart Video Doorbell has some attractive features and is one of the most premium video doorbells that doesn’t require a monthly subscription. In tests, it worked well although the lack of Amazon and Google smart home support is disappointing.

It would be nice if more detection modes were offered, allowing it to be used for surveillance alongside Netatmo’s other home security products.