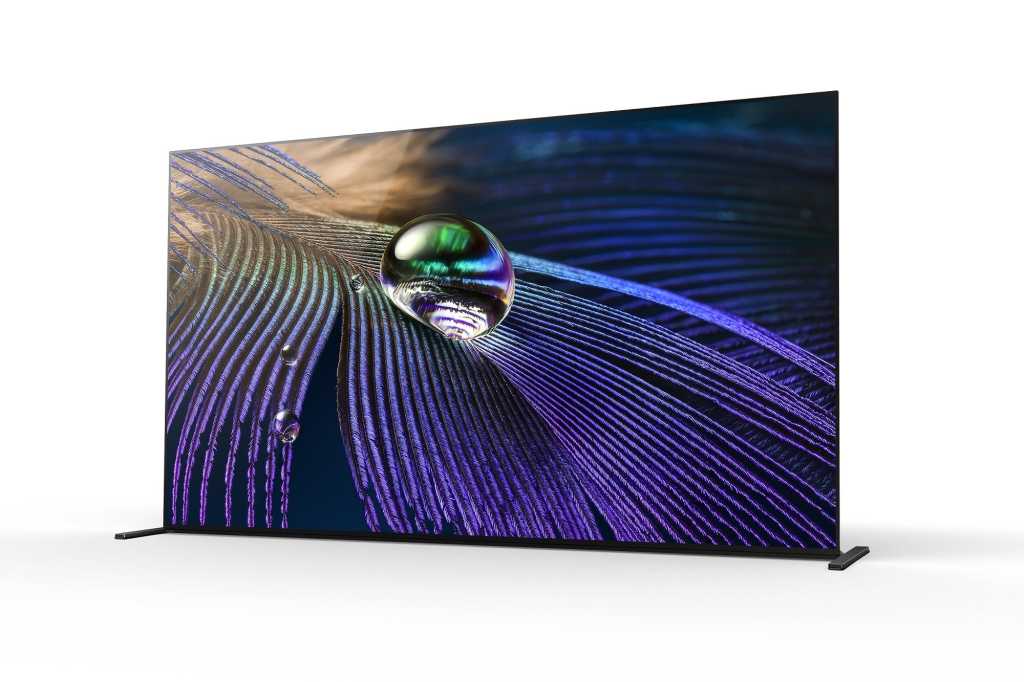 Highlights include a stunning design, lush OLED-under-glass images, improved processing, and the best audio you’ll hear from a TV. This is one of, if not the best, 4K UHD TVs we’ve seen.

Sony’s Bravia XR Master Series A90J 4K UHD OLED TV is upper crust all the way. The picture is lush and then some, the audio is as about as good as it gets in TVs, and it looks absolutely fantastic even when not displaying an image. Perfection? Not quite. But it is one of the top two or three 4K UHD TVs on the market, and in my book it’s the most attractive of them all.

Out of box experience, design, and specs

It’s not often that I’m impressed with packaging, but even that aspect of Sony’s A90J series is top tier. Then again, this TV needs all that extra padding and protection. The display face is glass, not the more typical plastic, and the bezel surrounding it is so narrow, banging it against a hard surface could spell disaster. But as glass is also stiff and protective of the OLED panel behind it, it’s actually much easier to handle than most TVs, where any undue pressure on the display surface could ruin it.

I also quite liked the TV’s setup routine. It actually makes an effort to verify that you have your devices plugged into the right HDMI ports, and it uses a mic on the remote to calibrate the audio to your room environment. Cool.

The physical design of the A90J is attractive and versatile. The OLED-behind-glass design not only makes for a rich picture, but an almost mirror-like negative space when the TV is turned off. The bezel, as I mentioned, is so narrow it almost disappears. The effect when wall-mounted using the 300mm x 300mm VESA point is simple but elegant.

The A90J is still attractive—though not quite as minimalist—when it’s sitting on something; especially when the legs are oriented outwards from the edges, as you can in the image below. This leaves the bottom edge of the TV flush with the supporting surface, which is a look I enjoy because you can hide things behind it. You can also reorient them to provide clearance, as well as use as secondary mount points toward the middle to rest it on a smaller table or stand.

Note that in the image below, half of the uppermost TV is cropped from the top—there is no ultra-wide model A90J!

The A90J is a 3840 x 2160 (4K UHD) OLED TV. I tested the 55-inch class model (54.6 inches measured diagonally), but it will also be available in 65- and 83-inch form factors. Alas, pricing for the two larger models wasn’t available at the time of this writing. The panel is 10-bit RGBW (red, green, and blue sub-pixels, with a fourth white sub-pixel to add brightness when necessary) with a 120Hz refresh rate. It doesn’t get better than that. The operating system is the latest version of Google TV (née Android TV).

The port array on the A90J is a bit unusual in that it provides actual clip connectors for bare wires to drive a center speaker (see above). Beyond that, it’s standard fare: Four HDMI ports, one of which supports ARC; another that supports a 120Hz refresh rate; and two more of the more typical 60Hz type.

There’s coax for a TV antenna or cable/satellite feed; optical S/PDIF out; headphone/auxiliary audio out; a 3.5mm composite video input; 3.5mm RS-232C for system integration; and three USB ports. Network connectivity is handled by 10/100 ethernet and 802.11ac Wi-Fi. There’s also Bluetooth 4.2 on board. I was expecting Bluetooth 5.0, but Sony’s implementation supports low-latency connections, so watching TV while wearing Bluetooth headphones is a good experience.

Sony, like other vendors, throws a lot of marketing pucky at you. In this case, the terms are XR this, XR that, and so on. I don’t indulge, but the A90J is the company’s top-of-the-line Master Series, so they’re doing everything the best they know how, and that’s generally as good as any company on the planet. In other words, Sony’s reputation is not without substance.

Sony’s latest RMF-T621U remote is long, thin, and sports a generally intelligent layout. I did find that the back cover has a tendency to pop off when you drop it. Simple solution: don’t drop it. Beyond succumbing to my clumsiness, the remote is also backlit (with an ambient light sensor) and universal, meaning it can control other devices. It’s also Infrared, though, so you must leave the receptor at the bottom middle of the TV unblocked to use it.

As I’ve already mentioned, Google TV is onboard, with large rows of app icons and functional icons at the top. My only complaint is that until you sign in to Google, the lower half of the screen is given over to a reminder to do just that, rather than displaying the lists of content for the installed apps. It’s less busy, but also less useful.

Honestly, I’d prefer that this space was simply blank. I also wish that to use a TV effectively, I didn’t have to sign in with a company whose privacy policy is that you have none. But hey, that’s just my opinion.

Getting back to the review, the A90J’s overall interface is very good. It’s not quite Roku efficient, but it’s close. Standalone sections for all types of settings are two clicks away, and there’s an ace TV channel guide.

Note that on June 9th, 2021, I revisited the A90J and had the same issues I once had with the media playback app. It crashed every time I tried to open my videos folder. This did not occur during my original testing, so I have no clue as to why. The same folder has worked fine with every other TV I’ve opened it on.

The A90J’s image is absolutely excellent with the vast majority of material. Sony has upped the usable brightness for its latest OLEDs, and HDR looks fantastic. Screen conformity is nigh on perfect, as you’d also expect from the technology.

Contrast is wonderful, and color is saturated and very accurate, although it appears Sony has tuned it a bit towards their taste. And, of course, the pure blacks of OLED rule the roost. Perhaps Samsung’s upcoming Micro-LED will change that—we’ll see.

As the OLED pixels are behind glass, you get the same effect you get from Apple computers and displays: Lush, rich, luxurious, and whatever other gushing adjectives you can think of. If you’re into animated movies, sci-fi, art films, and the like, there’s simply nothing that can touch it.

Processing, including upscaling, is improved from the last generation; indeed, it’s excellent, if not perfect. There were some minor glitches in the Spears & Munsil tests in the motion tests and some of the off-kilter fine-line tests. LG’s OLEDs are slightly better at those, but Sony easily matches its rival with real-world material. And there’s none of the garbage scattered all about the screen in the line tests, as you’ll see with some lower-priced LCD TVs.

The biggest processing uptick in my book is the A90J’s handling of pans when lots of fine detail is involved. I observed almost no moiré or shimmer. In fact, I’ve only seen less in 8K units. A bit of a warning here: The A90J is capable of a lot of brightness for an OLED. Crank it up and you can induce artifacts. Don’t do that.

I do wish motion handling was just a hair smoother, as there was an occasional slight judder with difficult material, such as an elevated train rounding a corner at slower speeds.

When it comes to audio, Sony plays second fiddle to no one. The company pioneered using the surface of an OLED panel as a planar driver, and that technology is present in this model in an updated and improved manner: Audio events match the action on the screen thanks to two full-range and two subwoofer actuators; plus, there’s simulated surround sound.

I was a bit sad to discover, however, that there are no user EQ controls, only pre-defined settings. I kept wanting to crank the bass up a bit. But at least there is bass; that frequency is a non-entity on the vast majority of modern TVs. That said, the A90J is quite likely the best-sounding TV I’ve ever heard.

Alas, I did encounter one blast from the past that I didn’t expect—or want: Sony’s Media Player app, for playing video files from USB and network storage (the latter via DLNA), crashed every time I opened the folder on a 64GB USB stick where my test videos are stored.

Reformatting the thumb drive didn’t resolve the issue, and I was still working with Sony to track down the problem at the time of this writing. Fortunately, this is not an issue most mainstream consumers will encounter or even care about. If you do, just download VLC from the app store.

I would like to remind everyone that we put these TVs through the processing wringer. Some of our tests create scenarios that never occur in real-life material. And no TV yet—including the super-pricey 8K UHD models—has aced them all.

The Sony Bravia XR Master Series A90J is a great TV, and its appearance when it’s wall-mounted, or flush-mounted on a surface, is absolutely fantastic in my book. It’s my all-time favorite. That said, you pay rather heavily for that last 10 percent of quality. If money isn’t a barrier for you, go for it. You’ll love it, too.

On June 14th, 2021, the product page was updated to indicate that the media player app is crash prone.