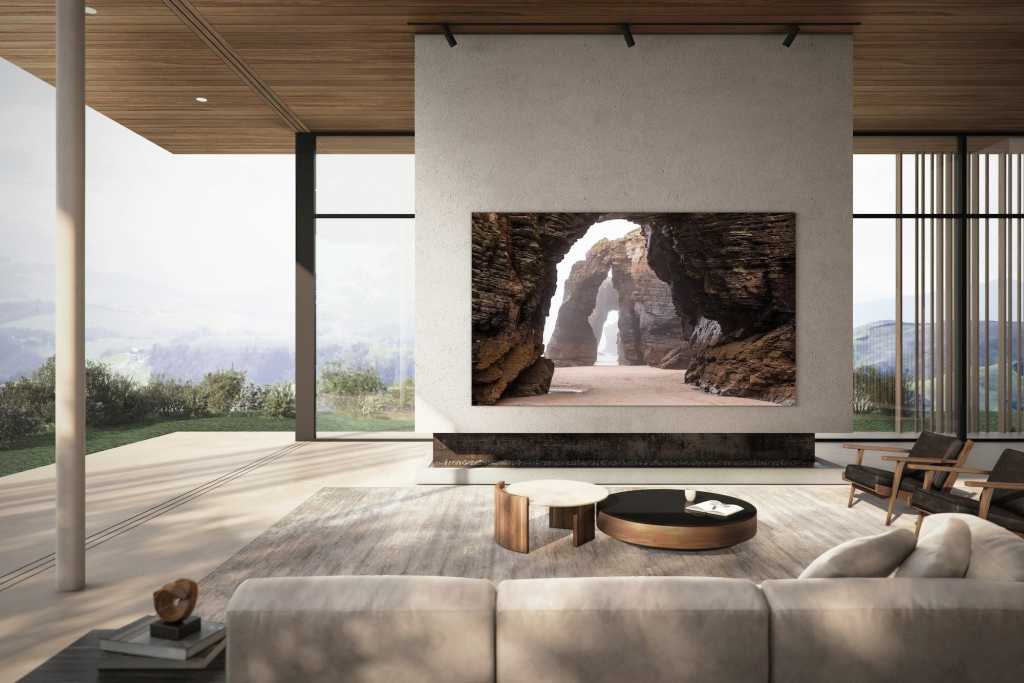 Samsung wants to put its gorgeous but pricey MicroLED TVs in more living rooms, with the company announcing a 76-inch model that will be its smallest MicroLED so far.

Samsung unveiled its new, smaller (a relative term, of course) MicroLED TV during its online Unbox and Discover event on Tuesday, during which the manufacturer also touted AirPlay 2 compatibility for its swiveling Sero TVs, a native TikTok app for its smart TV platform, a full-sun version of its outdoor The Terrace TV, and AMD FreeSync Premium Pro support for its latest sets.

Samsung’s new 76-inch MicroLED TV joins a lineup that includes 110-, 98-, and 88-inch models. The three larger sets are due to arrive later this year, while the 76-inch version is on Samsung’s “future roadmap.”

While Samsung’s earlier micro-LED efforts, such as its massive “The Wall” displays, arrived in separate modules that needed to be professionally installed, the company’s new 4K MicroLED line comes in a single, pre-assembled panel that’s ready for mounting right out of the box.

Samsung says it hopes the 76-inch model will usher in “more affordable price points” for its MicroLED line, but that doesn’t mean it will be cheap.

For example, the 110-inch MicroLED retails for the equivalent of $156,000 in South Korea, while Samsung’s 98-inch QLED Q900Remove non-product link, which is based on conventional LED technology, costs a breathtaking $60,000. It’s also worth noting that while the QLED Q900 supports 8K resolution, Samsung’s MicroLED line is currently limited to 4K.

Meanwhile, Samsung also announced that its 43-inch Sero TVRemove non-product link, which is designed to rotate from landscape to portrait modes for displaying social media feeds from your phone, will soon be getting AirPlay 2 support.

Previously, the Sero’s “tap-to-mirror” feature only worked on Samsung’s Android-powered Galaxy phones, but once the update arrives (Samsung hasn’t detailed timing yet), iPhone users will be able to cast content to the Sero via the AirPlay 2 protocol. The Sero’s display will also rotate automatically depending on the orientation of your iOS device.

Speaking of social, Samsung says a native TikTok app will be coming soon to its smart TV platform, allowing users to display the latest videos in their TikTok feeds on their TVs. The swiveling Sero will also support the TikTok app in portrait mode, Samsung notes.

The Terrace gets a full-sun model

Moving on to the great outdoors, Samsung announced a new version of its outdoor The Terrace TV that will be viewable under direct sunlight. Samsung says the 75-inch “full-sun” version of The Terrace will arrive later this year.

The existing Terrace line comes with 75-, 65-, and 55-inch 4K models all offer IP55 certification for protection from dust ingress and jets of water in any direction, but their displays are designed for viewing in partial shade.

Samsung didn’t reveal pricing for the new full-sun set, but the original The Terrace line starts at $3,500 for the 55-inch model.

For gamers, Samsung says its latest TVs will be the first to support AMD FreeSync Premium Pro, an enhanced version of AMD’s FreeSync technology.

Finally, Samsung announced some enhancements to its The Frame line, revealing that 2021 models of The Frame will boast 6GB of internal storage rather than the 500MB offered in earlier models.

Samsung said it will also debut a new “My Shelf” accessory, a modular shelf system that integrates with The Frame, allowing it to blend in with its surroundings.

Updated shortly after publication to clarify that Samsung’s 76-inch MicroLED is on the company’s “future roadmap” rather than being slated for later this year.