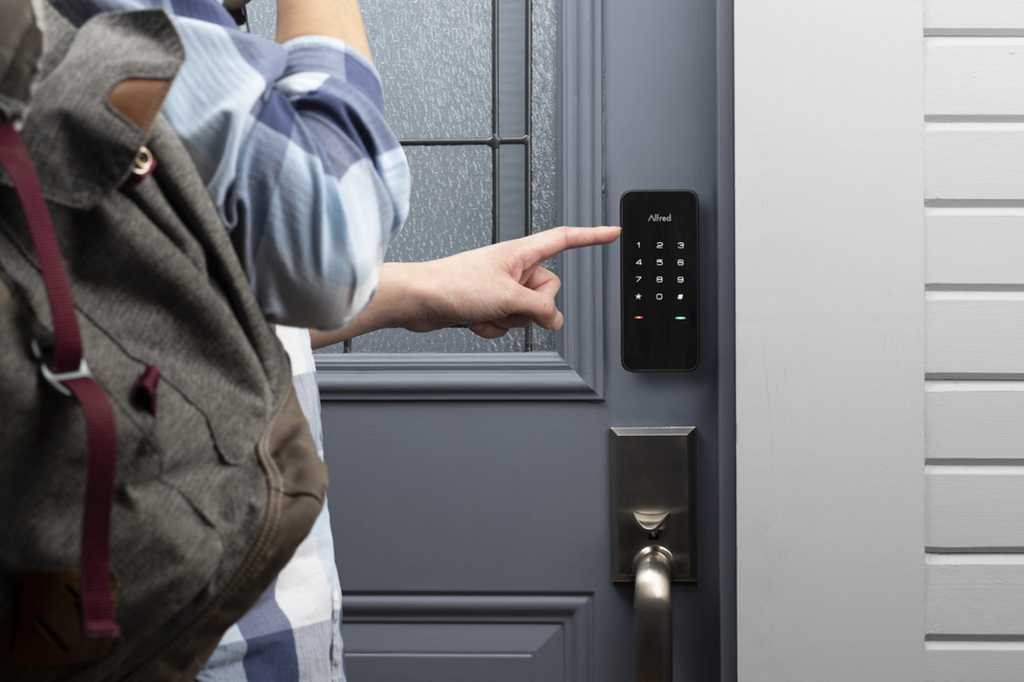 Alfred, Inc.
At a Glance

This Bluetooth and Z-Wave-compatible lock is a hassle to install, especially when connecting it to a Z-Wave smart home hub.

With apologies to Bruce Wayne, let us introduce you to Alfred, the latest smart lock brand to hit the market. The Alfred DB1 is the company’s entry-level lock and it comes in two versions: The $149 DB1-BL is a Bluetooth-only model, while the DB1-C-BL reviewed here adds Z-Wave to the mix for an extra $30.

Apart from the radios onboard, the locks look and function identically, with two primary modes of operation: Numeric keypad and mobile app. Both of the locks above are also available in versions with conventional key cylinders located behind swivel covers: The DB1-A-BL (Bluetooth only) and the DB1-B-BL (Bluetooth and Z-Wave).

If the lock’s four AA batteries die while you’re out, you can plug a portable battery charger into a micro-USB port on the exterior escutcheon and operate the lock that way. Alfred also has second lock family—the DB2 series—one of which includes a conventional key cylinder behind a swivel cover. You can read our Alfred DB2-B review here.

The Alfred hardware isn’t the most impressive I’ve seen, with an exterior escutcheon that resembles a chunky smartphone from the late 2010s and a blocky interior escutcheon that is crafted largely from plastic. While the exterior escutcheon is passable, the interior looks cheap and doesn’t feel as solid as many of the other devices in this category. Otherwise, the design is familiar—the two escutcheons connected by bolts, plus an optional third screw that is drilled into the door directly—but assembly is fairly complex in comparison to the rest of the industry.

This is owing in large part to a tailpiece that isn’t permanently attached to either escutcheon, and must be carefully aligned before you affix the interior escutcheon to the mounting plate. As well, one of the screws to attach the interior escutcheon to the mounting plate is located on the bottom of the device, close to the door. This is a tricky screw to turn without scratching your door, even with the included mini screwdriver.

After finally getting the DB1-C assembled, I was bothered that, though the deadbolt would turn just fine when I twisted the thumbturn on the interior escutcheon, the motor would whine and refuse to turn the bolt when I entered the master code on the keypad. I disassembled and reassembled the device four times before discovering the issue: a small switch inside the lock that determines whether your deadbolt is oriented facing left or right. While there’s a sticker about this inside the lock, I somehow missed mention of it in the installation guide. With that frustration solved, I was finally able to start using the lock normally.

Or so I thought. The big selling point of the DB1-C is its inclusion of a Z-Wave radio—with support listed for SmartThings, Vera, Ezlo, and Hubitat—but I was surprised that my SmartThings hub couldn’t locate the lock during setup. SmartThings’s setup routine noted support only for the newer Alfred DB2 model locks, and I couldn’t get the lock to pair to the hub no matter what I tried.

After resetting the lock and undergoing a tech-support session with the company, I was finally able to pair the lock using the DB2’s entry. As it turned out, the setup instructions within SmartThings were incomplete, and once we sorted that out, the lock paired normally—and worked fine within the SmartThings environment.

If you don’t have a compatible Z-Wave hub, but plan to get one later, you can still use the Alfred DB1-C-BL if you install the Alfred Connect WiFi Bridge ($49), a small accessory that must be plugged in permanently nearby. This device bridges Bluetooth to Wi-Fi (2.4GHz only) and is similar to the one used by many other smart locks, though note that it’s powered by a micro-USB connector. (A cable and A/C adapter are included.) If you don’t anticipate getting deeper into the Z-Wave ecosystem, save $30 and buy the less-expensive Bluetooth-only DB1-BL

Without a direct plug-in design, the bridge makes for an awkward appearance, with a weird sort of holster included to keep it from dangling freely from its cord. Suffice it to say it doesn’t fit in well with my décor. The bridge is worthwhile though, because it greatly extends the capabilities of the lock. Without the bridge (or a Z-Wave connection), you’ll be restricted to using the lock via Bluetooth or, even worse, programming the lock by entering arcane numeric codes on the keypad.

In stark contrast to the hardware, the Alfred Home app sets up quickly and easily, and I was able to use the app to quickly connect both lock and bridge to my network without a hiccup. The app is also easy to use, though that’s in part because there’s not that much to it. A lock/unlock button is front and center, though I had trouble getting this to work when I was out of Bluetooth range, even with the Wi-Fi bridge installed.

It’s easy to create PINs (though only 20 are allowed) and restrict access by time and day. PINs can be assigned to users who are invited via email or text, or left unassigned for general access. A promised one-time-use PIN feature, however, does not really exist. (Alfred says it has found that customers “prefer to instead send/share Bluetooth keys.”) Logging is reasonably robust, though note you’ll need to periodically refresh the log history manually by using the icon in the top right (pulling down the screen to refresh does not update the log).

A handful of extra features, including a configurable auto-locking system and a geofencing auto-unlock feature are also included, along with Alexa and Google Assistant connectivity, all of which depend on either the bridge or a Z-Wave connection. The geofencing feature didn’t always work in my testing: Although the app invariably alerted me when I came back into the geofencing area, the lock didn’t always unlock without having to enter my PIN—presumably because Bluetooth failed to connect properly.

The good news is that for day-to-day in-and-out operations, the lock works fairly well. It’s responsive to the app and to codes on the keypad, and the lock mechanism operates smoothly. Unfortunately, the $179 price tag is too high given its modest capabilities, rough setup, and plasticky construction. There are many better Z-Wave-compatible locks on the market.

Correction: This review was updated shortly after publication to clarify that the lock’s handling switch actually is mentioned in the user guide. We overlooked the instruction.