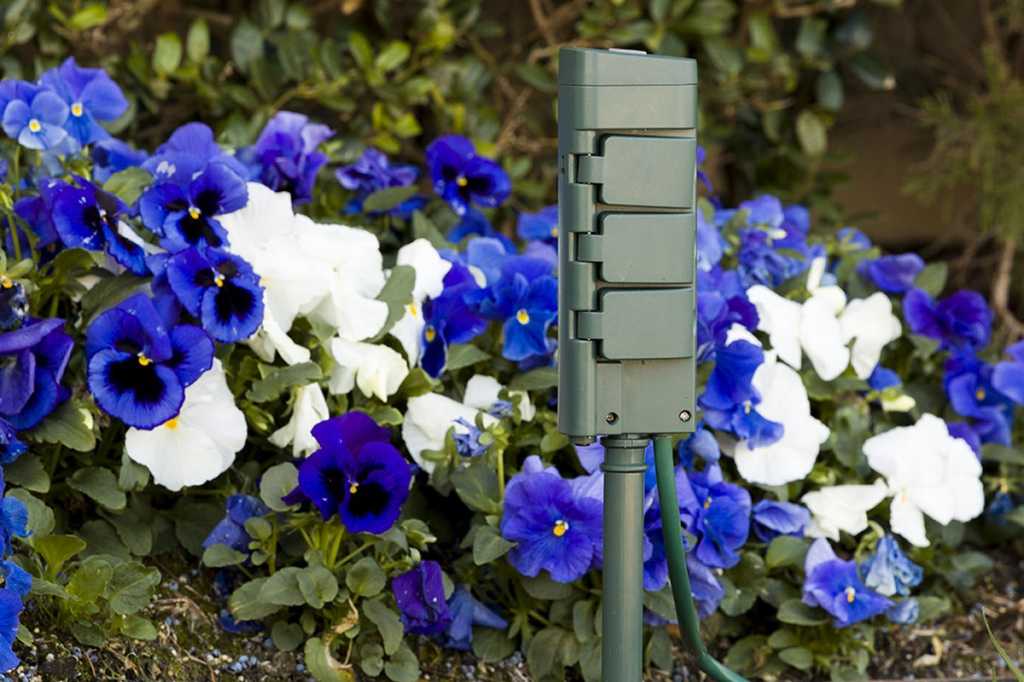 Jasco
At a Glance

This reasonably priced gadget gives you six weatherized smart outlets you can use on the wall or in your garden, but the six outlets cannot be controlled independently.

Most outdoor smart plugs give you two controllable outlets, and that’s it. We give them extra credit if you can control the two outlets independently, but what if two outlets just aren’t enough? Enter Jasco’s Enbrighten Outdoor WiFi Smart Yard Stake. This weatherized smart plug turns a single grounded outdoor outlet into six that you can control via Wi-Fi without needing a smart home hub. Unfortunately, all six are either on or off—the outlets cannot be controlled independently.

Just because it’s called the Enbrighten Smart Yard Stake doesn’t necessarily need to hammer this outdoor smart plug into the ground. The plastic stake is entirely optional and needn’t be attached; keyholes on the back let you mount it to your house if that’s more convenient. That’s how I elected to use it to control a small water fountain on my front porch. I also plugged in some low-voltage landscape wiring, and it will be even more useful this holiday season, when I use some of its remaining outlets for decorative lighting.

The Enbrighten Outdoor WiFi Smart Yard Stake has a six-foot, heavy-duty cord, which affords a degree of freedom as to where to place it (I’d recommend hiding it behind a shrub, where its green color will help disguise it). It has individual spring-loaded covers on each outlet, and it carries an IP65 weatherization rating. That means it’s entirely protected from dust and can withstand being sprayed with a hose with a tightened spray nozzle.

I wouldn’t recommend hitting with a pressure washer, but a handheld jet nozzle on your garden hose should be fine. (You can read all about IP codes in this story.) It’s worth noting that the Smart Yard Stake is prominently labeled as a seasonal device, suggesting that Jasco doesn’t anticipate you leaving it plugged in year round.

A button on top of the outlet stake turns all six outlets on or off, and an LED glows to show that it’s powered on (this behavior can be disabled in the app). More importantly, you can use the Enbrighten mobile app to control them and put them on a schedule. This is accomplished by first connecting the Smart Yard Stake to your Wi-Fi network. The device has only a 2.4GHz Wi-Fi adapter onboard, and during setup, Jasco’s app essentially suggests that you turn off your Wi-Fi router’s 5GHz network—or at least give it a name different from your 2.4GHz network.

That’s something of a pain in the neck with modern mesh routers, including the Linksys Velop system I use. The only way to accomplish that with the Velop, for example, is to log into the browser-based app and assign different names to the two networks. That setting is not exposed in the Linksys mobile app at all. I decided to take my chances and didn’t change my router settings. The app failed to find the Smart Yard Stake the first time but found it on a second go, and I haven’t encountered any problems since.

The Enbrighten app and ecosystem

The same app is used for all of Jasco’s Enbrighten Wi-Fi smart home devices, a range that includes indoor and outdoor smart plugs and a surge protector. You create a “home” in the Enbrighten app and then create “rooms” within the home and assign gadgets to those rooms. You can also group devices together and assign the same rules to all the devices in the group.

Once the Smart Yard Stake is set up in the Enbrighten app, you can turn it on and off with one touch on the app’s home screen, or you can link it to your Alexa or Google Assistant-compatible smart speaker and turn on all six outlets on and off with voice commands.

You can also program it to turn on and off according to a schedule or in response to conditions, including the weather, the status of other Enbrighten devices, and the location of your smartphone. (The geolocation feature was marked as being in a beta state and I did not evaluate it).

The weather conditions include temperature (equal to, less than or greater than a specified number); humidity (dry, comfortable, or moist); cloud cover (sunny, cloudy, rainy, snowy, or hazy); sunrise or sunset; and even wind speed (less than, equal to, or greater than a specified number). Weather conditions are gathered from the internet based on your address; there is no ability to tie in your own personal weather station, and there is no IFTTT support. Finally, you can switch the outlets on and then set a countdown timer that will automatically turn them off again.

I like the Enbrighten Smart Yard Stake a lot. The app is well done and provides plenty of scheduling and automation features. The device is very responsive, including its response time to voice commands, and its weatherization should strongly protect it from the elements. My biggest reservations are that it can’t be integrated into a broader smart home system, and its six outlets cannot be controlled independently. I’d be happier even if you could at least divide them into two three-outlet zones. In my fountain use case, for instance, I will frequently want to turn the water pump on without also turning on my landscape lighting or holiday decorations.

That said, $35 is a very reasonable price to pay if you don’t mind that you can’t integrate it into a broader system. And I could use the Smart Yard Stake for six devices I do want to control simultaneously and pick up Jasco’s $25 two-outlet Enbrighten Outdoor Smart Switch for my fountain, which can be controlled using the same app.

On the other hand, TechHive contributor Christopher Null cited a lot of connectivity problems in his review of the indoor device, so I’d want to know I could return the latter product if I had a similar experience.