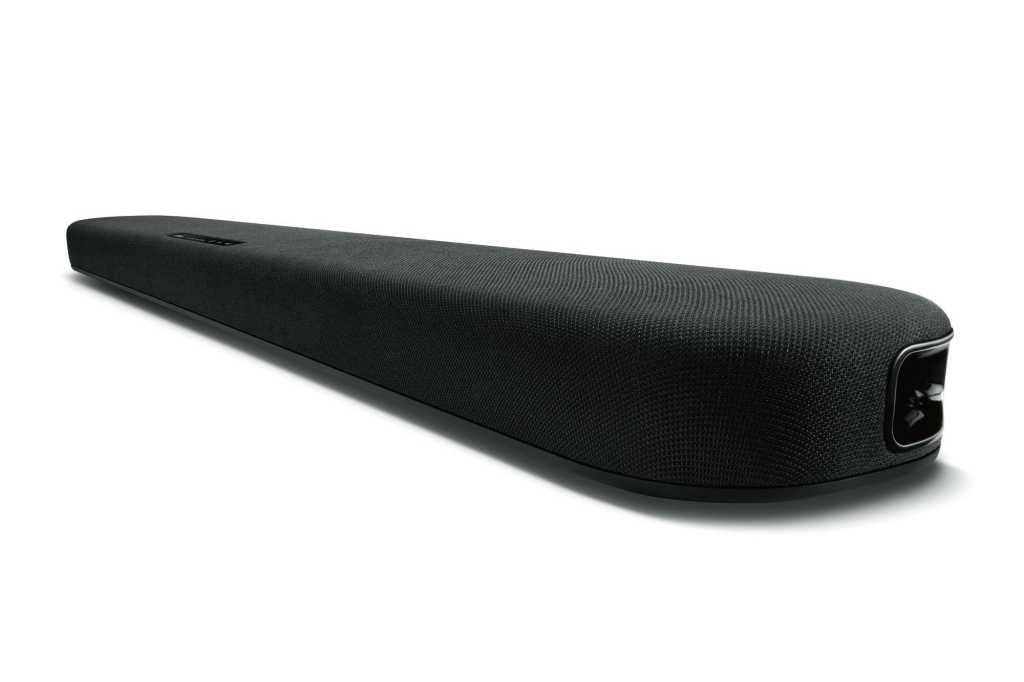 If the absolute ceiling on your budget is $200 and you can do without Wi-Fi audio streaming, Yamaha’s SR-B20A soundbar is a great value.

Going cheap on a soundbar generally means throwing your money away rather than saving it, but the Yamaha SR-B20A is a happy exception. While this $179 all-in-one soundbar lacks the bells and whistles you’ll find in pricier models, including Dolby Atmos and DTS:X support, Wi-Fi audio streaming, and AirPlay 2 and Chromecast, it it makes the most of its six drivers, serving up robust bass (which you can upgrade later with a wired subwoofer) and immersive DTS Virtual:X audio processing.

While we’ve rarely heard audio this good from a sub-$200 soundbar, you will hear better if you up your budget. We’re still smitten with the $249 Denon DHT-S216H, an all-in-one soundbar with slightly superior built-in bass and two HDMI connectors (versus just one for the SR-B20A), while the $799 Sonos Arc ups the ante with fantastic all-in-one sound plus Sonos’ vaunted wireless capabilities. But if you’re dead-set on keeping your budget below $200 and you can do without Wi-Fi audio streaming, the SR-B20A makes for a great value.

Unlike some all-in-one soundbars (such as the aforementioned Sonos Arc), the SR-B20 can’t be upgraded with wireless surround speakers. That said, an RCA subwoofer output lets you augment the soundbar’s bass by adding a wired self-amplifed subwoofer, a huge bonus if you want to add some extra oomph to the audio. While a wired subwoofer deprives you of the freedom to place the speaker wherever you want in the room, the RCA output means you can choose just about any subwoofer you like, rather than being stuck with the manufacturer’s wireless (and often expensive) option.

The 35.875 x 2.125-inch (WxH) SR-B20A fit well in front of my 55-inch LG C9 OLED TV, with the soundbar rising just shy of the screen’s bottom edge. You can also mount the soundbar on a wall under the TV; mounting spacers and a diagram are included in the box, but mounting screws and brackets are not included.

The SR-B20’s various connectivity ports sit in a rear cavity on the soundbar, and they include a single HDMI-ARC port, a pair of optical (Toslink) inputs, and the aforementioned RCA subwoofer out. There’s also a USB interface, but it’s only for installing firmware updates.

Missing from the collection of ports is a second HDMI port, which means you can’t connect HDMI-enabled video sources (such as a game console, a Blu-ray player, or a streaming player) directly to the soundbar—you’ll need to connect them to your TV, instead (provided it has enough HDMI ports). There’s also no 3.5mm jack for TVs without optical or HDMI outputs.

As with most other budget soundbars, the SR-B20 lacks Wi-Fi connectivity, which (looking on the bright side) means no fussing with finicky wireless connection settings. Instead, you just connect your TV’s HDMI-ARC port to the soundbar’s corresponding HDMI-ARC connector using an HDMI cable (you’ll have to supply your own, since Yamaha doesn’t put one in the box). The SR-B20’s HDMI-ARC interface doesn’t support eARC, an enhanced version of ARC that supports lossless audio—again, no surprise for a sub-$200 soundbar. (Click here to learn more about ARC and eARC.)

If you have an older HDTV that doesn’t support ARC, you can always send audio to the soundbar via the unit’s optical input. But if your TV doesn’t even have an optical audio output, you’re out of luck, given that the soundbar (as we already noted) lacks a analog 3.5mm jack.

The Yamaha SR-B20A has five LED indicators that sit on the top of the main housing, including lights for the HDMI-ARC (labeled “TV”), optical, and Bluetooth inputs, plus indicators for the soundbar’s stereo and surround modes. The LEDs double as a five-step volume meter. To the right of the LEDs are four touch-sensitive buttons for input select, volume up/down, and power.

The remote that comes included with the SR-B20A is simple but easy to use, with prominent volume and subwoofer level rockers, along with two large “Clear Voice” and “3D Surround” buttons. Along the top of the remote are input select buttons, while four sound mode buttons (including stereo, standard, movie, and game modes) sit in the middle. The mute button is at the bottom of the remote, flanked by the subwoofer and volume buttons, which makes it easy to find in the dark.

Besides the remote, you can also control the SR-B20A with a mobile app that connects to the soundbar via Bluetooth. The app is simple but covers all the important bases, allowing you to change inputs, toggle the Clear Voice, 3D Surround and “bass extension” modes, switch between stereo, standard, movie, and game modes, and either adjust the brightness of the soundbar’s LED indicators or turn them off entirely. If you’re looking for treble and bass sliders, however, there aren’t any.

Speaking of Bluetooth, that’s the only way to stream audio to the soundbar. Because the SR-B20A lacks Wi-Fi support, you’ll miss out on AirPlay 2 and Chromecast, as well as direct support for music streaming services such as Spotify, Apple Music, YouTube Music, Tidal, Qobuz, Deezer, and the like. It’s not unusual for a budget soundbar like the SR-B20A to skimp on Wi-Fi; for just $179, corners have to be cut somewhere. Personally, I’d rather lose the Wi-Fi than skimp on audio quality.

The Yamaha SR-B20A comes with a typical selection of sound modes, with three of the four modes—Movie, Standard, and Game—upmixing the audio with Dolby ProLogic II processing. The fourth sound mode, Stereo, drops the upmixing, making it more suitable for listening to music.

Besides the Yamaha’s generic sound modes, there’s also 3D Surround, which delivers virtualized 3D sound courtesy of DTS Virtual:X. While DTS’s virtual 3D sound mode does an impressive job of enveloping listeners in a wider, deeper soundstage, complete with virtual height effects, it can also apply an unwanted, unpleasant harshness to the sound. We’ll see—and hear—if that holds true for the SR-B20A in a moment.

There’s also a dialog-boosting Clear Voice mode, along with a “bass extension” that dials up the performance of the SR-B20A’s built-in subwoofers (I preferred keeping it off, but it’s there if you want it). Unfortunately, there’s no “night” mode for narrowing the soundbar’s dynamic range during late-night listening sessions.

A soundbar in the Yamaha SR-B20A’s sub-$200 price range can’t rival a full-on home theater setup, nor can it match a beefier soundbar with pumped-up specs. But if you’re looking for a cost-conscious way to improve on your TV’s iffy built-in speakers, the SR-B20A should make you pretty happy.

I was particularly impressed with the SR-B20A’s low-frequency performance, with the soundbar cranking out solid, tight bass with its built-in subwoofers. Granted, you’ll get much better low-frequency output with the help of a dedicated subwoofer, and as we’ve already discussed, the SR-B20A’s RCA subwoofer output makes for easy upgrading. I also recommend adding a subwoofer rather than turning on the “bass extension” mode, which sounded overbearing to my ears. But even without an external subwoofer, the SR-B20A manages to pack a respectable punch, particularly if you’re planning to use it in a bedroom or studio apartment.

I’m not a huge fan of DTS Virtual:X, generally speaking; on other soundbars, I’ve found its sound to be overly harsh, hollow, and lacking in mid-range frequencies. Luckily, the SR-B20A takes a more measured approach to DTS Virtual:X, teasing out some nice but relatively subtle (in a good way) surround and height effects without veering into fingernails-on-chalkboard territory. In a smaller listening space—such as, again, a bedroom—the SR-B20A’s DTS Virtual:X mode will do a solid job of expanding and deepening the soundstage, although its sound might falter a bit in a bigger entertainment room.

Teeing up the 4K Blu-ray of Star Wars: The Empire Strikes Back with both Movie mode and DTS Virtual:X enabled, the Millennium Falcon’s engines emitted a surprisingly deep roar for an all-in-one soundbar, while the DTS Virtual:X mode delivered some nice surround effects as the Falcon performed barrel rolls to evade the pursuing Imperial Star Destroyers. And as a downed Imperial Walker exploded during the Battle of Hoth, I could hear height cues as debris hurled through the air. To be clear, the SR-B20A’s virtualized 3D effects can’t match those of the pricier soundbars we’ve tested, but they sound pretty impressive for a $179 soundbar.

Switching to 1979’s Superman on iTunes, I could detect a little harshness during the fabulous opening title sequence and John Williams’ rousing score, but I still preferred the DTS Virtual:X mode over the duller, flatter sound of the SR-B20A’s Movie mode minus the 3D enhancement. Indeed, the soundbar managed to convey the excitement of Superman’s swooshing titles, while the twirling Phantom Zone seemed to spin over my shoulder after scooping up General Zod and his minions.

Next up was the thrilling launch sequence from Apollo 13, a scene that—with the right speakers—never fails to get my blood pumping. From the gurgling of the fuel pumps to the roar of the Saturn V’s engines as fiery exhaust billowed from the launch pad, the SR-B20A punched above its weight, ably tossing out virtualized surround effects and adding an airy ambiance while doing justice to the rocket’s deep rumble.

To test the SR-B20A’s music performance, I switched the soundbar to the Stereo audio mode and turned DTS Virtual:X off. Streaming “The Ghost of Tom Joad” by Bruce Springsteen via Bluetooth, the soundbar deftly handled the dynamics of this spare track, which starts with The Boss’ vocals and guitar strums before warming up with synthesizers and percussion. I also enjoyed the detail and atmospherics during Larissa Dedova’s performance of Ravel’s solo works for the Centaur label, while Ciara’s “Level Up” had plenty of punch without sounding too boomy or too flat. Will you hear better music performance from pricier soundbars? Absolutely, but for a mere $179, the SR-B20A’s musical chops are nothing to sniff at.

The Yamaha SR-B20A hits the sweet spot in terms of audio quality and price, packing impressive sound for a budget all-in-one soundbar even as it sacrifices niceties such as Wi-Fi audio streaming and additional HDMI connectors. Again, though, you’ll find better-sounding all-in-one options for more money (the Denon DHT-S216H and Sonos Arc come to mind again), while those looking for a budget soundbar that does Wi-Fi should consider the $109 Roku Streambar, a compact all-in-one with OK-but-not-amazing audio.