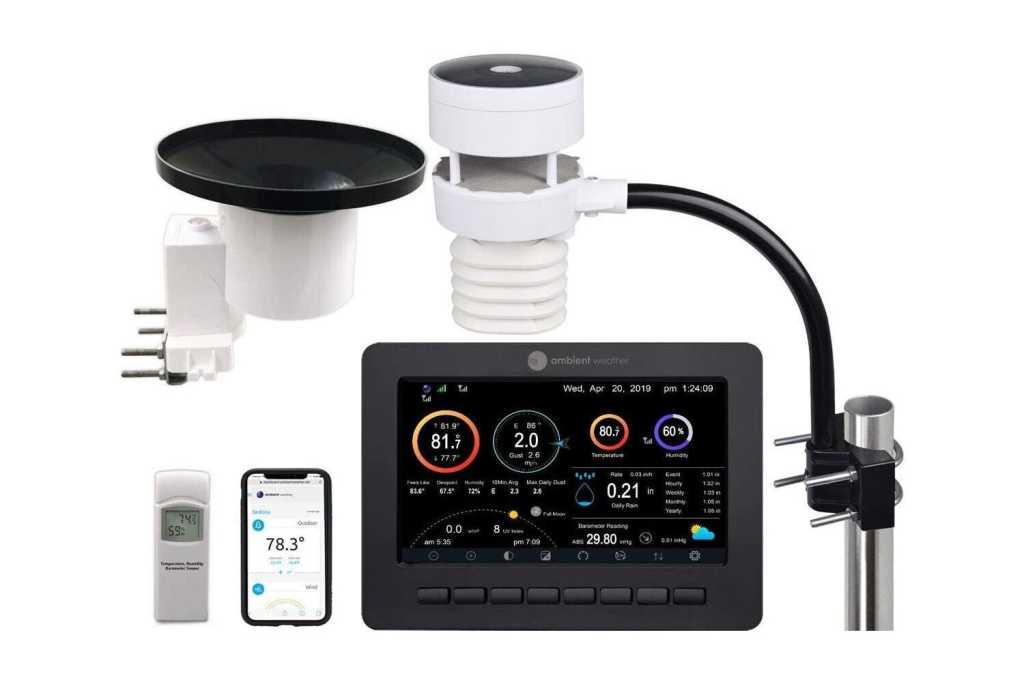 Ambient Weather’s WS-5000 home weather station is a significant improvement over its earlier and excellent WS-2902. It’s worth the extra cash if you can afford it.

We’ve observed a dramatic increase in the sophistication of home weather stations since we started reviewing them five years ago. Smart home connectivity is all but standard now, and instrumentation and sensors are significantly more accurate. This is why I was excited to see Ambient Weather’s WS-5000 on my doorstep.

Part of my excitement is from what has happened at Ambient Weather itself since I reviewed their last station, the WS-2902, back in 2018. Neilsen-Kellerman acquired the company in 2019, and the WS-5000 is the first station produced under the new ownership.

While you might not know Neilsen-Kellerman by its company name, you might be familiar with its brands. Take its Kestrel line of handheld weather meters, for instance. if you’ve watched Jim Cantore on The Weather Channel pull out a wind meter in a middle of a hurricane, it’s a Kestrel. The Rainwise brand is less well known, but if you’ve been in a museum or public space with a weather station, you probably saw the brand’s pro-level equipment.

This review is part of TechHive’s coverage of the best home weather stations,  where you’ll find reviews of the competition’s offerings, plus a buyer’s guide to the features you should consider when shopping for this type of product.

The WS-5000 is a marked departure from anything Ambient Weather has produced to date. Everything feels a little more upscale. The all-in-one sensor suite is gone. The wind sensor is now ultrasonic, with no moving parts. The rain gauge is a separate unit, with a larger funnel to improve rainfall measurements. Even the indoor temperature sensor, which includes humidity and barometric sensors, is separate—and it appears to offer more accurate indoor measurements.

Ambient Weather supplied us with a ton of additional sensors to test above and beyond the standard sensor suite, including:

With it being winter at the time of this review, I couldn’t test all of the sensors effectively. But installed the ones I could and will cover a few of them in more detail later.

Installation isn’t too tricky, although I did run into a few hiccups along the way. Much of the station comes preassembled: as long as you have the mast to attach the sensors to and the necessary batteries, you won’t need any more than 30 minutes to get things online. My installation took longer as we experienced an issue where the rain gauge and indoor temperature/humidity/barometer sensor wouldn’t connect automatically.

Ambient Weather has a support document for this problem, which addressed the issue and allowed the sensors to connect. The optional sensors connected to the console without an issue, so I’m not sure what caused the initial problems.

The site previously allowed access to station owners only, but a recent redesign enables visitors to search data even if they don’t own a station. This gives station owners an alternative to the Weather Underground setup process, which can be finicky.

I did find the on-console portion of the setup process to be a bit cumbersome. Many competing weather stations have a setup wizard on the console, or a mobile app to guide you through the first steps. The WS-5000 doesn’t have either of those; you must navigate menus, which can be a pain.

Past the wonky setup, my experience with the WS-5000 was positive. The TFT LCD console screen is a serious upgrade from the WS-2902, whose console was underwhelming. Using an actual display versus the LCD panel of the WS-2902 allows it to display all kinds of information, including separate screens for recalling and charting past weather data.

You can view your sensor data from a decent distance and any angle, although there is a lot of data on the screen. Some may appreciate the wealth of information, but a cleaner interface would have allowed Ambient to make the station’s primary data (temp, wind, rain, etc.) more prominent on the screen.

As you add more sensors, more of the screen is filled with information: fully decked out with all of the optional sensors, the UI feels a little crowded and overwhelming. But console preferences aside, there’s a lot to be impressed with.

When it came to the barometric pressure readings during our WS-2902 review, the sensor responded too aggressively to pressure changes. The rain gauge also was an issue, often overcounting rainfall in heavier downpours.

These issues are gone in the WS-5000. The barometric pressure readings are more accurate, and the larger funnel for the rain gauge is much improved as well; that said, the lack of liquid precipitation events (much of what we received during the test was snow or sleet) gave us too little data to make a concrete judgment.

We’re big fans of the new five-second update interval of the new sensor suite. This is a massive improvement over the WS-2902, which sometimes required a full minute to deliver data.

The new sonic anemometer was impressive as well. While it only has a maximum speed of 89 MPH—slower than the WS-2902’s traditional cup-and-vane setup—wind readings were far more accurate. You can add an optional heater to prevent the anemometer from accumulating snow or ice, which will cause inaccurate readings. We’d recommend that if you’re deploying this weather station in a colder climate.

The WS-5000 connects to Wi-Fi in the same way the company’s other connected weather stations do. Both the app and web-based dashboard use the company’s cloud service, AmbientWeather.net. As we mentioned previously, IFTTT, Amazon Alexa, and Google Assistant support are all included. With IFTTT, you can trigger your sprinklers to stop when rain is detected, or turn your lights on when the solar brightness outside falls below a certain level.

Once you enable the Ambient Weather skill in your voice assistant of choice, you can ask for a hyper-local weather report. But no matter how you frame the question, you get all the reporting data, even if you only ask for a specific variable, such as the temperature outside. We complained about that in our review of the WS-2902, and it looks as though Ambient Weather hasn’t addressed it.

Since we reviewed the WS-2902, Ambient released another station, the WS-2000. This model comes with the same console as the WS-5000, but it uses sensor suite from the WS-2902. While the TFT LCD screen addresses our problems with the WS-2902’s cheap console, the sensor suite still has its limitations.

Instead of the super-fast five-second interval, data is delivered every 16 seconds from the outdoor sensors and 64 seconds from the indoor one. You’ll also suffer from the rainfall over-measurement issues and the wonky barometer I mentioned earlier. Considering the WS-2000 is priced just $10 lower than the WS-5000, I don’t recommend it.

Quirky, but a top-tier station

The WS-5000 has its own set of quirks, but they’re closer to annoyances than deal breakers. It is by every measure the most accurate station Ambient Weather has ever released, and it rivals Davis’ Vantage Vue in terms of performance.

But Davis seems stuck in the 20th century when it comes to connectivity. While Davis has finally added Alexa support, there is still no Google Assistant support or connectivity options to popular smart home devices and services. This has opened up the door to competition from companies like Ambient Weather.

Among builders of “smart” weather stations, Ambient Weather has proven to be the best in the long term. While my initial thoughts on the Weatherflow Tempest were positive, we found over time that its haptic rain sensor doesn’t measure rain accurately enough. The AcuRite Atlas, still in service at a friend’s house on the Jersey Shore, also appears to regularly under measure rainfall.

While Davis is all around the best station in terms of accuracy (we hope to test the top-tier Vantage Pro 2 soon), its high price and lack of true smart home capabilities make it less useful in the connected home. This is where Ambient Weather shines, and with the WS-5000 you’re getting about as close as you can to Davis-like accuracy with modern smart home functionality.

Hopefully, this station continues to impress us over time, as we’ve been let down several times before. But Ambient Weather’s known for listening to its customers, and the WS-5000 is in part the result of listening to years of consumer feedback.