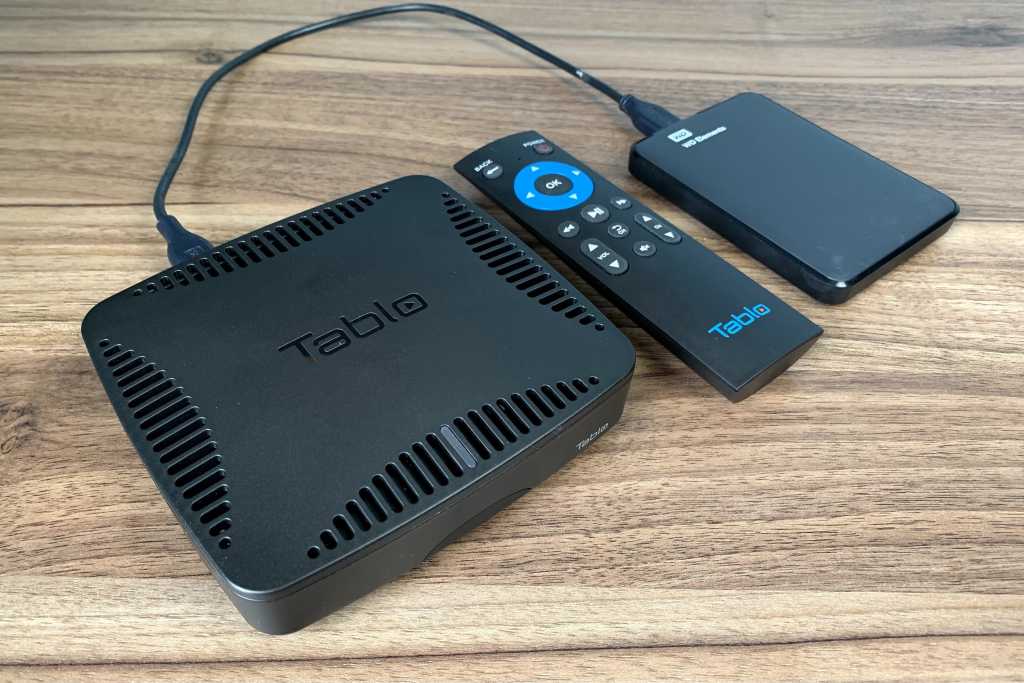 For the past few years, our recommendation of Tablo as the best over-the-air DVR for cord cutters has come with a caveat: If you refuse to compromise on video quality, you’re better off looking elsewhere.

The $150 Tablo Dual HDMI (and $200 Quad HDMI, which has four tuners instead of two) rectifies the problem by playing and recording local channels at native broadcast TV quality. It uses an antenna to receive local broadcasts and hooks up to your TV with an HDMI cable, but it can also stream video over Wi-Fi to Roku, Fire TV, and Android TV devices. Either way, broadcasts look the same as they would with an antenna plugged directly into your TV, and you can play or record from up to two channels at the same time. As with other Tablo models, you also get lots of useful recording features to justify its optional subscription fee.

This review is part of TechHive’s coverage of the best DVRs for cord-cutters, where you’ll find reviews of the competition’s offerings, plus a buyer’s guide to the features you should consider when shopping for this type of product.

Even so, the Tablo Dual HDMI creates some new trade-offs not found on other Tablo models. The HDMI version doesn’t work with as many streaming devices—most notably, you can’t watch on phones, tablets, or laptops—and it doesn’t support out-of-home streaming. You’ll also need a strong Wi-Fi network to stream those full-quality broadcasts.

Because of those limitations, the Tablo Dual HDMI is a great option for videophiles or cord-cutters who only plan to watch on a single television; it’s less ideal for everyone else.

There are two ways to use the Tablo Dual HDMI.

The first is to plug it straight into your TV with an HDMI cable. The device comes with its own remote control, and once you hook up an antenna and external USB hard drive—both sold separately—you can control everything through your TV.

The other way is to treat it like Tablo’s networked DVRs, streaming local channels over your Wi-Fi network to other devices. In this case, you would install the Tablo app on Roku, Fire TV, or Android TV. Those apps will automatically recognize the Tablo when it’s on the same network, letting you watch live TV and access the DVR.

Either way, you’ll need to plug the Tablo Dual HDMI into your TV for the initial setup. And of course, you can combine the two approaches, with direct input for one TV and streaming for others.

Like other Tablo DVRs, the HDMI model has two optional subscription tiers.

For $5 per month or $50 per year, you get 14 days of guide data, series-based recordings, cover art for TV shows, and the ability to browse by genre. Tablo also requires this subscription to stream on other devices for the Dual HDMI model.

With the direct-to-TV connection, you must use Tablo’s IR-based remote control, which unlike most streaming remotes requires line-of-sight to the box. And despite that IR connection, it can only control your TV’s volume and power over HDMI-CEC. If your TV doesn’t support CEC for those functions, you might need a separate remote for volume and power.

The box itself also just feels a bit slow, with chunks of the TV guide sometimes taking several seconds to load. And because the device lives on its own HDMI input, you’ll need to switch inputs if you have a separate streaming device for services like Netflix.

Using the Tablo Dual HDMI as a networked tuner wipes away all those issues. With a Roku, Fire TV, or Android TV device, switching to Tablo is as simple as opening the Tablo app, and most of these devices have better remote controls than what the Tablo box offers. I also didn’t experience any guide-loading issues on streaming devices such as the Roku Streaming Stick+. The only catch is that you need a fast Wi-Fi connection—upwards of 18Mbps—to stream smoothly.

No matter which approach you choose, though, the core DVR experience is the mostly the same. And this is where Tablo really shines.

In addition to 14 days of guide data with a subscription, Tablo provides genre-based menus to help you find things to record, and you can easily set up series recordings with tweakable parameters, so you don’t waste space on unwanted programming. For instance, you can limit recordings to just the latest few episodes or create one-off episode recordings. (The only nitpick here is that you can’t search for shows by name except on Roku devices.)

Along the way, Tablo also provides lots of clues for when its dual tuners are overbooked. You’ll see a red indicator in the TV guide and DVR program list, and there’s also a schedule view for looking through all upcoming recordings. For any given program, you can disable a single recording without nixing the entire series.

Tablo’s playback experience is pretty nice as well. With live TV, you can pause or rewind any show, or hit the up arrow to bring up a mini-guide. For recordings, Tablo displays a visual preview when you fast forward or rewind, which helps with skipping over commercials. (Unfortunately, Tablo no longer offers its $2 per month add-on subscription that let users automatically skip over commercial breaks.)

All of this may seem like table stakes for anyone who’s used to cable or a TiVo DVR, but you’d be surprised how many fledgling over-the-air DVRs overlook these features. Replicating the creature comforts of a cable DVR is an area where Nuvyyo’s experience with Tablo really shows.

The price of pristine broadcast TV

Keep in mind that all of those DVR features are also available on other Tablo DVRs, such as the Tablo Dual Lite and Tablo Quad. You can even get some Tablo models with built-in storage, obviating the need for a separate hard drive.

As of now, though, the Tablo Dual HDMI is the only model that plays broadcast channels in their native MPEG-2 format. That means video looks clearer than it does on other Tablo DVRs, and all channels are capable of 60-frames-per-second playback. On other Tablo models, channels that broadcast at 1080i or 480i will only play at 30 frames per second, which creates a choppy effect for sports, news, and talk shows. (All Tablo models do support surround sound, so audio quality isn’t an issue here.)

Being able to enjoy Tablo’s DVR features without sacrificing video quality is refreshing, but there are still reasons to choose other Tablo DVRs instead.

The Tablo Dual HDMI’s main sticking point is device support. Although Tablo offers apps for iOS, Android, Apple TV, Chromecast, Xbox One, Samsung TVs, and LG TVs along with a desktop website, none of those are compatible with the Dual HDMI. Tablo maker Nuvyyo says the native video players on those devices don’t support MPEG-2, which means Nuvyyo would have to build a custom player to support them. The company has not announced any plans to do so.

And because the Dual HDMI cannot transcode video, it can’t reduce video quality to save bandwidth or storage space. You’ll need a strong network for streaming to the devices that the Dual HDMI does support, and your hard drive space won’t go as far. Perhaps for related reasons, the Dual HDMI doesn’t support out-of-home viewing either.

The other downside is that channels can take a long time to load—upwards of eight seconds per channel, in my experience—as they buffer onto the hard drive. Tablo does remember the last channel you visited and can load it much faster, but the initial waiting period is worse than Tablo’s other models.

Tablo’s other networked DVRs would be better options if any of those issues or omissions are dealbreakers. Otherwise, you can look to Plex or Channels DVR, which are trickier to set up than Tablo, but match (or in some cases, exceed) Tablo on features—including ad skipping—without sacrificing video quality.

In a perfect over-the-air DVR world, Nuvyyo would just offer a Tablo model that could both preserve full broadcast quality and optionally transcode video as needed. Instead, as before, you’ll just have to decide which trade-offs you can most easily tolerate.

Correction: An earlier version of this review said that the Tablo Dual HDMI offered a lifetime DVR service option. That option had previously been exclusive to Tablo’s non-HDMI models (but has since been discontinued for all Tablo devices).