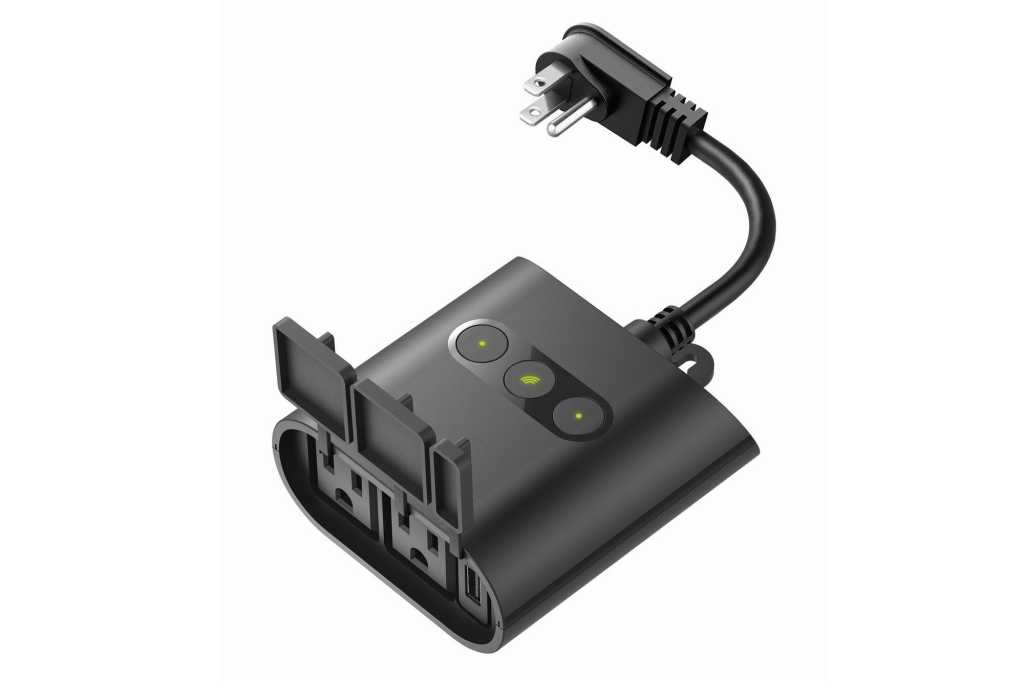 If you must have a USB port built into your outdoor smart plug, this is the only game in town (just be prepared to pay dearly for it).

D-Link’s new, beefy Outdoor Wi-Fi Smart Plug (model DSP-W320) has a killer feature that seems to be unique in the smart home space: In addition to its pair of three-prong outlets, it features a 2.1-amp USB-A port, so you can charge your phone without needing to bring an adapter with you on the porch.

But before you decide to buy the product based on that checkbox in its feature set list, let’s look in more detail at this smart plug and how well it actually works.

First, you’ll notice that I mentioned “beefy.” At a weight of nearly .75 pounds, this is a monster of a switch. To be sure, that kind of heft connotes seriousness and ruggedness, and the unit feels like a veritable brick when in hand. That said, the device is rated as IP54: It’ll keep enough dust out to avoid failure, but it’s only resistant to getting sprayed with a garden hose, so do take care to keep it from laying on the ground when you’re using it outside. You can read all about IP codes in this story.

The device is rated for a total load of 1,800 watts, which should be plenty of power for almost any home use case. Each outlet—and the USB port that renders it unique—can be protected by its own individual rubber cover when not in use. These are sturdy and effective at keeping dust and dirt out of the sockets.

The two outlets can be individually controlled both in hardware and software: The top of the device features two power buttons, each with a green LED that illuminates when it’s on. There’s also a wireless status LED in between the two buttons, letting you know when the unit is connected to Wi-Fi (2.4GHz only). These LEDs can’t be disabled. The USB port is also always on and can’t be turned off.

Setup takes place via the mydlink app and involves scanning a QR code that’s printed on a card included in the box as well as imprinted on the back of the plug. The setup process was slow and buggy for me, and I had to try three times to get the system to connect successfully to my Wi-Fi network, each time involving an interminable wait. This was followed by two firmware update attempts, each lasting at least 10 minutes, before I was able to fully use the plug.

While D-Link’s control app is uncluttered in appearance, it’s surprisingly not all that friendly to use. While it’s easy to manually control your outlets, the scheduling system—which was recently revamped, according to an embedded video in the app—is far from user friendly. D-Link tries to make the process intuitive by letting you schedule on/off times by tapping and dragging within a week-long calendar, but each day must be configured individually; there’s no option for setting an “every day” schedule, and no way to set the schedule for both outlets simultaneously. It’s needlessly time-consuming, though at least the countdown timer is a lot more intuitive. A better option for many may be to use one of D-Link’s third-party connections, including Google Assistant, Alexa, and IFTTT, for managing scheduling and automations. Apple’s HomeKit technology, however, is not supported.

The biggest issue with this plug, however, is the price. At $50, it’s at the top of the market for outdoor Wi-Fi plugs, though none of its competition can boast having a USB port. Whether that port is worth an extra $20 or so is a big question, namely because I’m still not entirely sure how I would use it, seeing as I’m rarely lingering in the vicinity of an external power outlet. Charge your phone? Power a USB speaker? I suppose that even in the worst case it can’t hurt to have options.