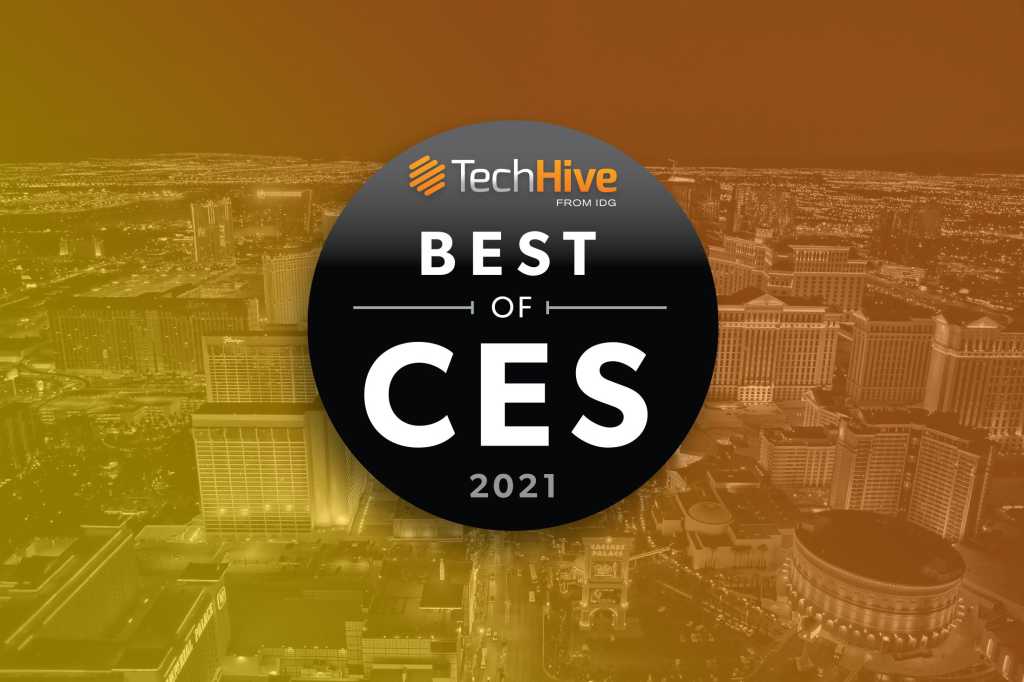 If you think judging a product based on what you can see and hear in a jampacked and noisy convention center is hard, imagine doing it over a Zoom connection. That being said, these smart home and home entertainment products impressed us despite the limitations of the venue.

The products below are presented in alphabetical order. If you’d like to see everything we checked out at CES 2021, just click here.

Wait, three thousand bucks for a doggie door? You heard right, but Chamberlain’s myQ Pet Portal is no cut-rate plastic flap. Rather than a standard pet door that you install in an existing door, the myQ Pet Portal arrives pre-installed in an exterior door manufactured by the doormaking artisans at Kolbe Windows and Doors. The Pet Portal itself boasts doors that slide open like an elevator, while a camera, microphone, and speaker sit in a square situated above the opening. You can control the Pet Portal manually using myQ’s mobile app, or dogs can let themselves in and out if you attach a sensor to their collars. The doors will also close automatically to keep unwanted critters from sneaking in behind your pooch.

Settling on one smart home ecosystem will eliminate the confusion instilled by juggling disparate apps, but it’s not always problem with your favorite product in one subcategory doesn’t have a solution for a different category. Such was our conundrum with GE Lighting’s smart dimmer—the company didn’t have a smart ceiling fan controller in its ecosystem. But that changes with the Cync Fan Speed Smart Switch. The industrial design mirrors the dimmer for a consistent look, which is an important consideration if the products are to be installed side by side, and it lets you set four speeds for the ceiling fan it’s connected to. Even better, you can group the fan with other GE Lighting smart home devices and schedule them at the same time. We’re also happy to see the company dump its awkard-to-say C by GE branding in favor of the simple Cync.

Security cameras do a great job of spotting intruders—provided they step into the camera’s field of view. The Hex Home Security system from Origin Wireless can sense a burglar no matter where they move inside your house. A Hex Command Hub and Hex Sense plug-ins blanket your home with Wi-Fi radio waves and then use artificial intelligence to analyze how those waves are disrupted by people walking around. If you’re not home, the Hex Sense units will sound an 80dB siren and the system will send an alert to your smartphone via your Wi-Fi network. You can tune the system’s sensitivity so that your pets won’t set it off and trigger a false alarm. Origin says it plans to offer an optional but inexpensive professional monitoring service plan that will dispatch the police if you can’t be reached after an alarm is tripped. A kit adequate for a 1,500-square-foot home will arrive this spring for $180.

After living through 2020, we’re ready to take a long, luxurious dip in Kohler’s extravagant Infinity Experience tub. A member of Kohler’s line of Japanese-style Stillness Bath soaking tubs, the top-of-the-line, 48 x 48-inch Infinity Experience features an infinity edge, an aromatherapy diffuser, and an “Experience Tower” that can dispense lavender, peppermint, or other essential oils, complete with a moody fog that floats over the water. A Hinoki wood moat surrounding the tub catches the water that flows over the edge; the water is then reheated and pumped back into the tub. Expect the $15,598 Infinity Experience to ship in October.

We’re all for big, bold soundbars crammed with drivers galore, but we’re even more impressed by pint-sized soundbars that still manage to pack a punch. While we haven’t heard the 11.7-inch-wide Eclair in action, it certainly looks good on paper: Not only are we talking Dolby Atmos and DTS:X support, but it also comes with a 3.1.2-channel driver configuration, which means the soundbar’s height effects are achieved through actual up-firing drivers rather than virtualization. The diminutive Eclair also comes with a compact subwoofer that’s designed for solid but not “teeth-rattling” bass, while its rounded, fabric-covered design gives the soundbar a homey feel. Indeed, we think the Eclair might be a perfect soundbar for a bedroom, and the idea of watching a movie with Dolby Atmos while snuggled in bed sounds enticing.

Samsung, Sony, and TCL all had impressive TV announcements this year, but it’s hard to argue with OLED technology, and LG is the undisputed king in that category. The company announced an optimized OLED element that it says will serve up brighter and even more accurate color for its 2021 model-year OLED TVs. The new tech might also mean these sets will be less susceptible to burn-in, the Achilles heel of OLED technology. We’re also looking forward to checking out LG’s QNED TVs that combine quantum dots and miniature LED backlighting (aka mini-LED), which could wind up delivering some of the deepest contrast you’ll see outside of OLED. Meanwhile, a revamped Magic Remote gets a comfier design, dedicated Alexa and Google Assistant buttons, and Magic Tap compatibility, which will allow you to connect NFC devices to your TV with a simple tap. Finally, LG’s WebOS is graduating to version 6.0, complete with an updated interface and recommendation based on your viewing history.

Belkin is leveraging the pristine 6GHz spectrum that the new Wi-Fi 6e standard opens up to build what sounds like will be a supremely powerful mesh Wi-Fi network—although one node might be all that most of us ever need. Belkin says a Linksys AXE8400 router on its own can blanket a 3,000-square foot home with coverage. Those blessed with super-fast broadband connections will appreciate this router’s 5Mbps WAN port, and there are four gigabit LAN ports to support NAS boxes, media servers, and other hardwired network infrastructure. Smart-home dwellers, meanwhile, will be interested in the Linksys Aware service that’s based on Origin Wireless’ technology (described above). Be prepared to pay a heft early-adopter fee: A one-pack is expected to fetch $450 when it goes on sale in the “spring/summer” timeframe, while a two-pack will go for $850 and a three-pack will set you back a cool $1,200.

The newly opened 6GHz frequency band and its 59 non-overlapping wireless channels is the new frontier of Wi-Fi, offering unprecedented wireless bandwidth with a minimum of latency. Netgear’s batwing-shaped Nighthawk RAXE500 will be among the first Wi-Fi 6e routers to tap that spectrum, and Netgear says its three networks combined will deliver theoretical speeds up to 10.8Gbps. The latest router in the Nighthawk line boasts a 1.8GHz quad-core processor, a 2.5Gbps WAN port, the ability to aggregate two of its five ethernet ports for 2Gbps LAN or WAN connections, and two USB 3.0 ports. Slated to go on sale later this quarter for $600, the Nighthawk RAXE500 could the perfect fit for gamers looking to cut latency to the bone; although for now, there are only a handful of Wi-Fi 6e clients with which it can connect.

Say what? Hearing loss is no joke once you hit the magic age of 40, but a new gadget debuting at CES could make for a more effective alternative to a hearing aid (or simply cupping your ear). Equipped with technology licensed from the National Acoustics Laboratory in Sydney, Australia, the Apple MFi Certified Noopl plugs into the Lightning connector on your iPhone or iPad, and it uses a triangular array of three beamforming MEMS (microelectromechanical system) microphones and a head-tracking system to amplify the sounds that are coming from directly in front of you, while also screening out background noise. Designed to work with Apple AirPods, the $199 Noopl can also be used with any other headphones or microphones, provided you manually control the direction of the microphones using the Noopl app for iOS (an Android version is in the works, we’re told).

We know smoke detectors can be smart, but can they also be sexy? The Owl Wired is doing its best on that front, and it’s coming pretty close. Owl Home is a new player in the smart home market, but their smoke detector looks poised to shake things up. It can warn you of smoke and carbon monoxide, of course, but it can also report the temperature and humidity levels in your home, monitor and analyze noises, and detect motion. It depends on AC power, but it has a backup battery that will keep it running for three months in the event of a blackout. And it connects to your Wi-Fi network, so that an Owl Wired in one room senses danger, the LED light ring and siren in all Owl Wireds you have deployed in your home will sound the alarm. The manufacturer is taking preorders now at discounted prices: $139 for the white model and $149 for the black model. Regular prices will be $169 and $179 respectively. The Owl Wired is expected to ship in October.

Roborock’s new S7 isn’t the manufacturer’s first robot vacuum that can also mop hard-surface floors, but it might be the best. Equipped with a sonic mopping system capable of varying anywhere from 1,650 to 3,000 times per minute (which helps the vacuum to cut through surface dirt and dried-on spills), the Roborock S7 can automatically lift its mopping unit when it senses that it’s moved from a hard floor to an area rug or carpet, or when it docks at its charging station. Compatible with Alexa, Google Assistant, and Apple’s Siri, the S7 also boasts a redesigned, floor-hugging brush that should do a better job of sweeping up dirt.

Sony introduced this technology in 2019 and has now enhanced it so that artists can have their live performances captured on video, with the soundtracks encoded with this technology that allows recording engineers to place instruments and vocals anywhere in virtual 3D space. The music can be played on specialized speakers or on any type of headphone. With headphones, Sony uses head-related transfer functions (HRTF) to simulate the sound coming from different directions. Sony’s own headphones, however, give you the opportunity to customize the HRTFs for the shape of your ears. You snap photos of your ears and Sony’s app analyzes their shape and customizes the algorithm accordingly. Sony released a video of the Swedish singer/songwriter Zara Larsson performing live that was engineered in 360 Reality Audio, and you really get the sensation of being on stage with her and her band. It’s very fun. You’ll find more details at this link.