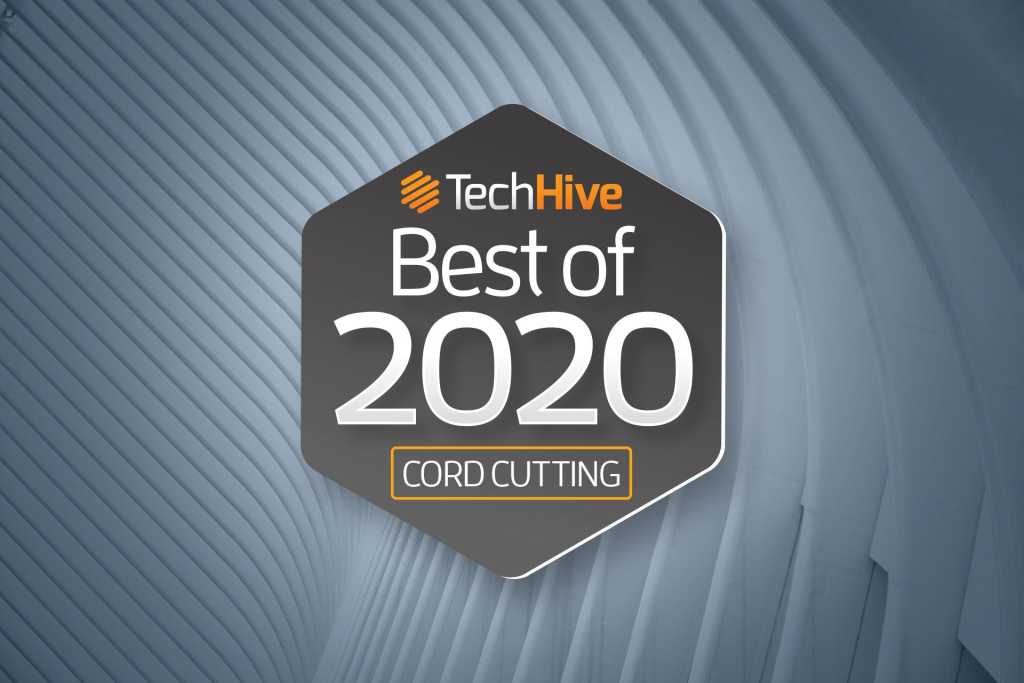 While the circumstances were hardly ideal, 2020 was a big year for cord cutting.

Streaming services like Netflix and Disney+ saw their subscriber numbers soar as people looked for ways to pass the time at home, and the temporary suspension of live sports accelerated the decline of traditional pay TV bundles. While not coronavirus-related, this year introduced two major new streaming services in HBO Max and NBC’s Peacock, and we saw some bold attempts to rethink the streaming device with Google’s new Chromecast and the TiVo Stream 4K.

I’ve been writing this weekly column (and newsletter) on cord-cutting through it all, so in accordance with annual tradition, I’d like to cap off 2020 by recounting my favorite developments of the year. Here are TechHive’s fifth-annual cord-cutter awards:

At the start of the year, I wrote that unified streaming TV guides would be one of cord-cutting’s biggest trends, and no streaming device delivers on that idea quite like the Chromecast with Google TV.

Instead of making us look through each streaming service’s catalog one-by-one, the new Chromecast presents a unified guide with content from Hulu, Disney+, Amazon Prime, HBO Max, and more. And instead of shunting this guide off to some separate menu, Google made it the focal point of its entire interface. You can still launch individual apps on the new Chromecast, but to do so would miss the point.

Having a birds-eye view of all your streaming services is a revelation, leading to movies and shows you otherwise might’ve missed and helping you get more value from your subscriptions as a result. It should be model for other streaming devices to follow, even if the recently reduced level of Netflix integration is a bummer.

Runner Up: TiVo Stream 4K, whose approach to aggregation is similar even if its execution is a little less polished.

Amazon likes to point out that the Fire TV Stick is its best-selling streaming device, which might explain why the company waited four years to give it more processing power. With the new $40 Fire TV Stick, users no longer have to suffer through excessively long load times and herky-jerky menus. The Fire TV Stick 4K is still the better buy at $10 more, but the standard Stick is a fine alternative for folks who aren’t buying a 4K TV anytime soon. (Just make sure to avoid the cheaper “Lite” version and its less-functional remote.)

It’s rare for a single feature to drastically alter the value proposition of a streaming device, but that’s what happened when Roku added Apple AirPlay support to its 4K streaming players. If you have an iPhone or iPad, you can use AirPlay to launch videos and music from your phone, loop your TV into a multi-room AirPlay audio setup, mirror your iPhone or Mac on the big screen, or ask Siri to control the TV. AirPlay even provided a workaround for watching HBO Max on Roku before the official app became available.

While several smart TV platforms also offer AirPlay support, Roku players are now the cheapest way to add AirPlay to an existing television, with prices starting at $40 for the Roku Premiere. That beats having to spend $180 on an aging Apple TV 4K.

This was a tough call given that HBO Max also launched this year, but Peacock gets the nod for being more attuned to the current state of cord-cutting. Instead of trying to get traction with yet another expensive streaming service, NBCUniversal made 13,000 hours of movies and shows available for free. An optional $5-per-month subscription adds more content, while a $10-per-month tier makes Peacock ad-free. Peacock also taps into our analysis paralysis with an array of linear “channels,” offering steady streams of Saturday Night Live skits, Premier league highlights, news from NBC, and more.

HBO Max isn’t a bad service by comparison—HBO’s originals alone are arguably better than any of Peacock’s offerings—but it needs more and better content to become the the Netflix rival it aspires to be. (Next year’s day-and-date theatrical releases might help.)

While most streaming services get better by adding more content or new features, Locast improved simply by making itself available in more places. The non-profit service streams over-the-air channels for free (though a $5-per-month donation is required for uninterrupted viewing), allowing cord-cutters to access local broadcasts without an antenna or an expensive pay TV bundle. This year, Locast launched in more than a dozen new markets and now covers nearly half of the U.S. population.

Whether Locast can survive being sued by TV networks remains uncertain, but the service is now a sustainable operation thanks to viewer donations, showing just how much demand exists for affordable access to local channels.

Runner-up: CBS All Access, which has added more content, spiffed up its apps, and added new features such as kid’s profile support ahead of next year’s rebranding to Paramount+.

Best new use of an over-the-air antenna: HDHomeRun Connect 4K

2020 was a sleepy year for antenna-related products, perhaps because the industry is holding out to see what the next-gen ATSC 3.0 broadcast standard will bring, but SiliconDust didn’t bother to wait. In September, it started shipping the HDHomeRun Connect 4K, becoming the first company to offer a mass-market ATSC 3.0 tuner box. Theoretically, it can receive broadcasts in 4K HDR and play over-the-air content on-demand.

I say “theoretically” because ATSC 3.0 is still in an experimental phase, and the current ATSC 1.0 standard isn’t going away anytime soon. But at $200, the Connect 4K is only $50 more than the ATSC 1.0 version, which will eventually become obsolete if the new standard sees wide adoption. That’s not much to ask for peace of mind if you’re trying to build a future-proof over-the-air DVR setup.

Given how many people leaned on Amazon Prime to deliver household staples this year, Amazon probably could have gotten away with increasing the price of its service. (Or, if you believe an antitrust reckoning is coming, perhaps not.)

In any case, $120 per year remains a perfectly reasonable price for Prime’s two-day shipping and other assorted perks, one of which happens to be an increasingly competent streaming video service. Even if you only used the video component to watch The Boys, you probably still got your money’s worth.

Most surprising embrace of cord-cutting: T-Mobile

The real surprise, however, was the way in which T-Mobile apparently created these packages. Shortly after launch, TV networks started complaining that T-Mobile hoodwinked them into splitting up their channels through contractual trickery. They’re now trying to cajole T-Mobile into bundling everything back together.

So far, the carrier has partially acquiesced, adding Vibe’s channels to its pricier Live bundle and eating the cost (for now). But even if T-Mobile’s attempt to break apart the TV bundle doesn’t last, it deserves credit for trying—and for laying bare who’s really to blame for bloated bundles.

January 2020 already seems like a lifetime ago, but that was when we lost PlayStation Vue, a live TV streaming service that was ahead of its time. Vue was an early adopter of 60-frames-per-second video and voice control, it offered a broad range of sports channels that its competitors lacked, and it was the first to support split-screen channels on Apple TV (a feature that only Fubo TV offers now). It also won stellar satisfaction scores from consumers and industry praise for its reliability.

So why did it fail? The PlayStation branding probably didn’t help a service that was in fact widely available on major streaming platforms, but Vue was also constantly undercut by competitors with money to burn, and live TV was always a poor fit for Sony, which eventually abandoned it to sharpen its gaming focus. Its demise was a sobering reminder that quality alone doesn’t always win.

In a recent column, I wrote about the Channels DVR service, and how the goal of developer Fancy Bits is to build a DVR for everything. The concept is one that I might’ve written off several years ago, when I assumed that DVRs would become obsolete in the age of on-demand streaming.

Since then, I’ve heard from countless readers who are seeking exactly what Fancy Bits aspires to create. They don’t want a hodgepodge of different apps, each with their own interfaces and with varying rules on how long you can watch their content. They just want a simple DVR-style menu for all their favorite movies and shows, with everything permanently available to watch on a moment’s notice, online or off.

Creating that kind of experience is difficult work, and Channels DVR isn’t quite there yet—for one thing, you need some tech savviness just to set it up—but the service has made major strides in the right direction with features like Locast support, TV Everywhere channel integration, and the ability to import video files from outside sources.

In a way, it’s trying to reach the same aggregation goal as the Chromecast with Google TV, but from an entirely different direction, and it’s been exciting to watch.

Thanks for following along with me through yet another year of cord-cutting developments! To stay on top of it all in 2021, please check out my Cord Cutter Weekly newsletter, which includes a link to this column and more every Friday morning.