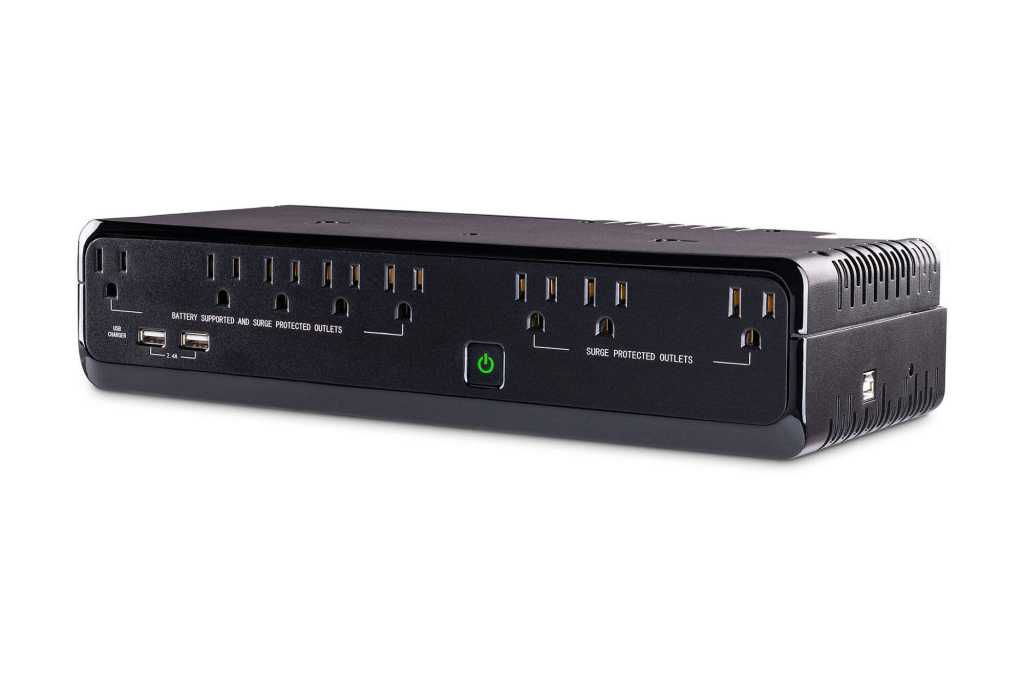 Image: CyberPower Systems
At a Glance

The eight-outlet CyberPower SL700U has a problem: it’s not exactly fish nor fowl. This well-made, relatively compact unit can provide backup power of up to 370 watts/700 volt-amperes (VA), enough to provide standby power for about nine minutes for a modest computer, like an iMac or mid-range Dell Inspiron tower with an external monitor.

This UPS, however, offers power output from its battery that only simulates the smooth sine wave produced by alternating-current power that comes from an electric utility. This simulation lurches through steps instead of sliding smoothly between negative and positive voltage, which is a problem for modern computer power supplies. This isn’t an issue with solid-state devices such as Wi-Fi routers or broadband modems—those are the devices best suited to use with it.

This review is part of TechHive’s coverage of the best uninterruptible power supplies, where you’ll find reviews of the competition’s offerings, plus a buyer’s guide to the features you should consider when shopping for this type of product.

Most modern computers feature active power factor correction (PFC). This lets the hardware’s power supply more efficiently transform incoming AC into the DC power used within a computer. It can also work across a variety of voltages and frequencies supplied by utilities around the world. But when you combine a simulated sine wave with active PFC instead of a pure sine wave produced by more-expensive UPSes, the power supply may produce a high-pitched whine whenever power comes from the backup device’s battery. It’s also possible that the power supply can experience small amounts of damage that will add up over time.

This UPS is also configured as a standby model, in contrast to a more advanced line-interactive UPS. A standby UPS taps its battery whenever voltages sags or surges enough that it needs to cut devices from power mains attached to its battery-backed outlets and feed electricity directly. A line-interactive model passes all its power through a conditioner, which cleans up small eccentricities and keeps the battery in reserve for more extreme conditions, or a full-on power outage. That preserves the life of the battery with a line-interactive model in areas with routine power sags, surges, outages, or other problems.

A line-interactive UPS can also leap into action in about 4 milliseconds (ms) to provide power from its battery, as opposed to a rated 8ms for the SL700U. That difference can sometimes be enough to crash a sensitive computer. With line-interactive UPSes costing only slightly more watt-for-watt as standby, I recommend computer owners pick that style.

This UPS does have a cost advantage for providing battery backup to less-sensitive, but potentially more critical network devices in your home—to wit, a broadband modem, a Wi-Fi router or the access points in a mesh Wi-Fi network, as well as an ethernet switch if you have a profusion of wired devices.

That kind of equipment has a low power draw, allowing a long runtime on an affordable standby UPS like the SL700U. The rated time for this model would allow keeping 100W of devices running for about 20 minutes, and 50W for about an hour. With particularly power-efficient gear, you might get as long as two hours out of the battery.

If you’re in a location with relative frequent outages, including ones that last 5 to 20 minutes, you might be able to keep your network going with this UPS, while you use mobile devices and laptops that don’t require their own UPS. (internet service providers often have generators and other backups that let them continue to provide phone, data, and cable services even while there’s a localized or even regional power outage.)

If you need just surge protection 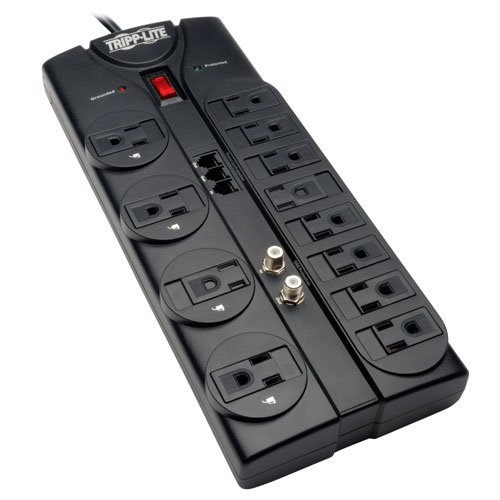 The eight outlets on the SL700U are divided into three that are protected only against surges, as with any standalone surge protector, and five that are connected to the battery. The placement is a little tight: the five outlets have one placed 2.25 inches away from the next, while the other four are spaced just 1.125 inches apart. (The same is true for the surge-protected outlets, with one spaced further than the other two.) It also has two USB charging ports (5V at up to 2.4A), which is a nice extra.

CyberPower offers downloadable software for macOS and Windows that lets you configure the UPS, even if it’s not permanently connected to the computer. You can disable all audible alarms (a big bonus for some people), and set the UPS to restart itself when power returns, among many other features. If you wind up using the UPS with a computer that doesn’t rely on active PFC, you can also use the PowerPanel software to schedule shutdowns and startups, or react automatically when the power is out. (I’m happy to report that an updated version of the Mac software released in August 2020 eliminates problems in installation and usage that I experienced when reviewing another CyberPower devicev earlier in the year.)

The SL700 features a wiring fault light—on one short side, next to the USB connector for a computer hook-up—which you should check when first plugging it in. The LED illuminates red if there’s any wiring issue, such as a missing ground, bad ground, or reversed wiring. If you were to buy this unit and see a red light when plugging this UPS in to power, disconnect it and call an electrician immediately.

CyberPower includes a useful and extensive manual in the box, as well as full warranty information—unlike some other manufacturers. The company offers three years’ worth of protection against an unexpected failure of the UPS and a perpetual $100,000 worth of insurance against repairs or destruction of attached equipment. Both the UPS and attached-equipment warranties are available only for the original purchaser, who needs to report a failure within 10 days of the incident and provide the original dated purchase receipt.

The computer world has largely moved beyond standby UPS models, but they still have a place: the CyberPower SL700 is the right price for network stability and continuity in the home.