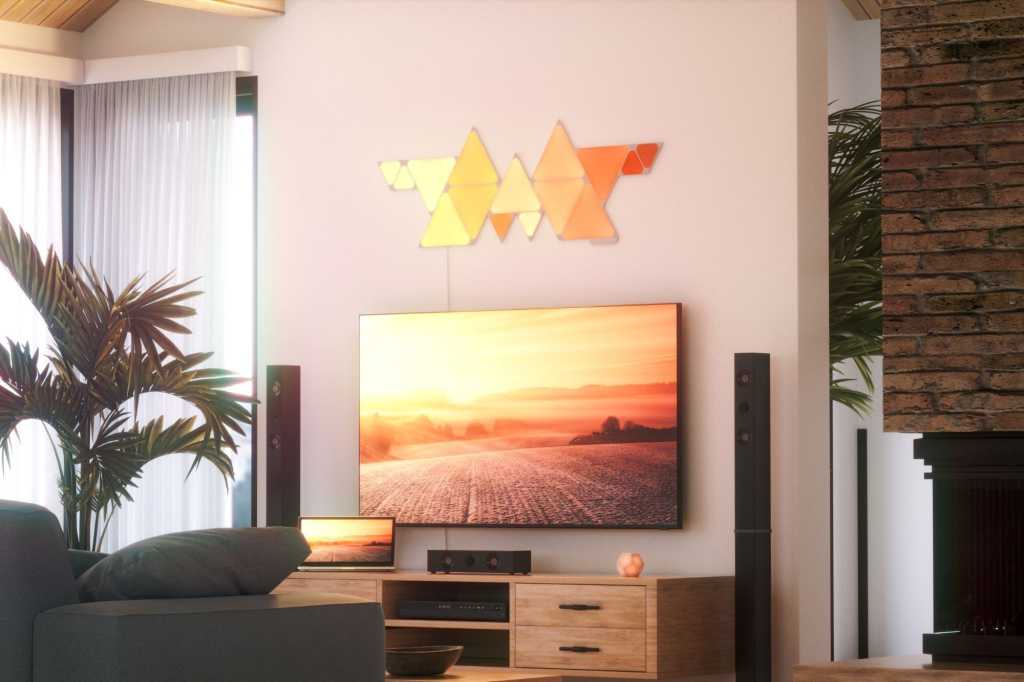 These eye-catching light panels don’t offer much utility, but they make for an easy and reliable way to decorate a room, and their “touch actions” offer an ingenious way to control your other smart devices.

With its eye-popping, touch-sensitive Hexagons, Nanoleaf’s new line of Shapes light panels got off to a great start, and the innovative smart lighting manufacturer keeps a good thing going with its new Triangles and smaller Mini TrianglesRemove non-product link counterpart.

The Triangles and Mini Triangles are the second and third variants in Nanoleaf’s Shapes series, which itself is the successor to Nanoleaf’s earlier, triangular Light Panels (formerly known as Aurora) and Canvas Light Squares.

Measuring 0.24-inches thick, the 9 x 7.75-inch and 4.5 x 3.8-inch Triangles and Mini Triangles feel light (0.31 and 0.09 pounds respectively) yet reassuringly sturdy. Each Triangle panel can emit up to 80 lumens of brightness, or up to 20 lumens for the Mini Triangles. Individually, that’s not a lot of light, but you could illuminate a room by connecting enough panels together.

Like the Hexagons, the Triangles and Mini Triangles can be tuned from a warm 1,200 Kelvin to a cool 6,500K, and they can emit up to 16 million colors. All of the Shapes panels are rated to last 25,000 hours, and they connect only to 2.4GHz Wi-Fi networks (a common limitation for Wi-Fi-enabled smart lights).

Mounting the Triangles and Mini Triangles to a wall is surprisingly easy, although you should spend time on a design before you start. If you don’t want to wing it, you can use the Layout Assistant in the Nanoleaf app, which lets you pick the number of Shapes panels you have and then arrange them in different combinations; you can also tap a button to randomly shuffle them until you happen upon a pleasing arrangement. When you’ve come up with a good design, an AR-aided view lets you preview how the panels will look on your wall. In the end, I opted for a vertical design using a combination of Triangles, Mini Triangles, and a leftover Hexagon from a previous Nanoleaf installation.

Once you’re all set with a design, it’s time to start mounting. If you opt to stick the panels to your wall, you simply stick the double-sided adhesive tape to a panel’s pre-attached mounting plate, press the panel onto the wall, then hold it in place and press in a circular motion for about 30 seconds. You can then snap a link onto the back of the panel (although it’s easiest to do so before mourning the panel onto the wall), connect the next panel in your design, and then repeat the adhesive process. Nanoleaf recommends cleaning the surface of your wall before beginning your installation (I skipped that part, with no ill effects).

When you’re done mounting your Shapes, you’ll need to connect the power cord, which terminates in a chunky, outlet-bocking plug, and a controller, which comes with touch-sensitive power and brightness buttons, plus controls that let you change and shuffle lighting scenes. You can snap those accessories onto any link connector on your panels, wherever it’s convenient. It’s worth noting that there are varying limitations to the number of panels that a PSU can power and a controller can manage; for example, a single controller can handle up to 500 Shapes panels (including Hexagons, Triangles and Mini Triangles), while a single PSU can handle up to 28 Triangles or 77 Mini Triangles. If you’re planning on a larger installation with a mix of Shapes, a calculator on the Nanoleaf site can help you figure out how many PSUs you’ll need.

The final step is to connect your Triangles and/or Mini Triangles to your Wi-Fi network using either the Nanoleaf app or the Apple Home app. Using the iOS version of the Nanoleaf app, I tapped the “Start Pairing” option, then scanned a QR code on the power supply, and within a few seconds, the panels popped up in the app.

The Triangles and Mini Triangles boast the same lighting features as Nanoleaf’s Hexagons, including a vast array of animated light scenes (such as “Vibrant Sunrise,” “Triluminox Energy Crystal,” and even “Netflix and Chill”), along with an integrated microphone that lets the light panels pulse to your tunes. There are also interactive, touch-sensitive scenes and games such as “Touch Paint,” “Whack a Mole,” and “Simon.”

You can activate the various scenes using the Nanoleaf app, the touch controller, the panels themselves (keep reading for more details), or via a schedule (daily and weekly schedules are available, but no vacation or sunrise/sunset modes) or a customizable playlist. Check out my review of the Nanoleaf Hexagons for more details about the lighting scenes for Triangles and Mini Triangles, but suffice to say that the flashing, rippling, and pulsing light shows are an impressive sight, and they added a much-needed splash of color to my dark office.

Besides interactive scenes and games, the Triangles and Mini Triangles allow you to program touch gestures that let you turn the panels on and off with a double-tap, swipe up or down to adjust brightness, or swipe across to change lighting scenes. You can also configure “touch actions” that let you control other HomeKit-enabled lights or devices by tapping, double-tapping, or long-tapping a panel. There’s even a screen-mirroring feature that lets you sync the Nanoleaf panels with the images on your PC screen (a feature that requires the desktop Nanoleaf app).

The Nanoleaf Shapes series has been designed primarily with HomeKit in mind, but the Hexagons, Triangles, and Mini Triangles also work with Alexa and Google Assistant voice commands and routines (and yes, that includes sunrise and sunset scheduling). There are also integrations for IFTTT, SmartThings, Homey, and Flic.

With its new Triangles and Mini Triangles, Nanoleaf takes another solid step forward with its Shapes series. No, these eye-catching light panels don’t offer much utility, but they make for an easy and reliable way to decorate a room, and their “touch actions” offer an ingenious way to control your other smart devices. We’re looking forward to the next entry in Nanoleaf’s Shapes line, whatever it may be.