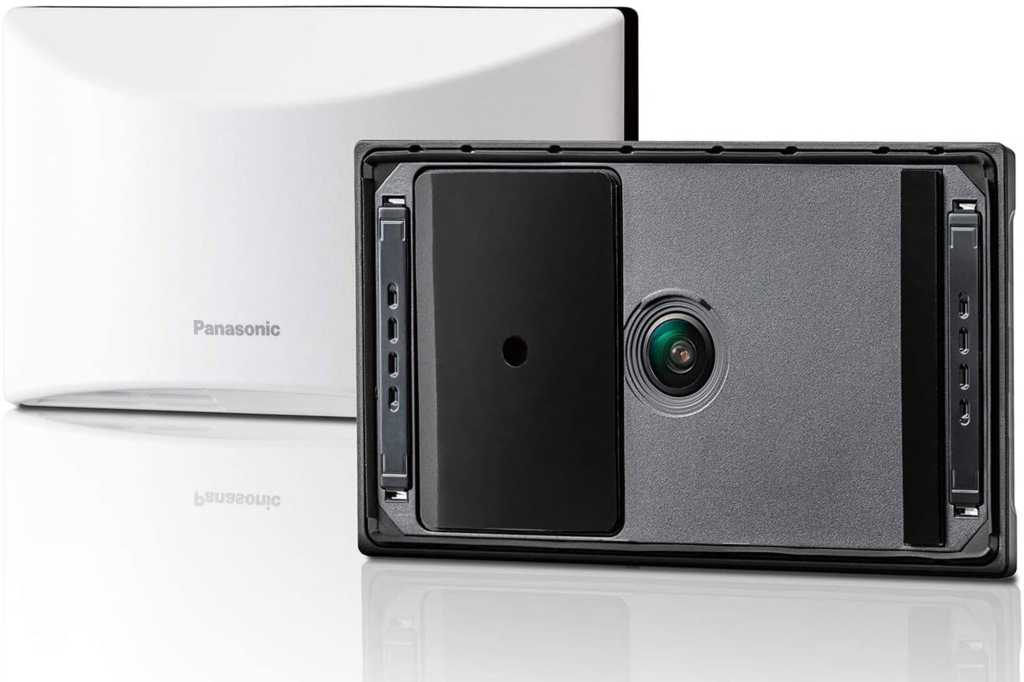 Panasonic
At a Glance

The HomeHawk window camera is a solid alternative to conventional outdoor cameras, but its app needs improvement to make it a more user- friendly experience.

Panasonic’s HomeHawk Window Camera mounts directly to the inside of your window, with its lens looking out on the exterior of your property and promising to solve a number of problems related to setting up an exterior home security camera.

This review is part of TechHive’s coverage of the best home security cameras, where you’ll find reviews of competing products, plus a buyer’s guide to the features you should consider when shopping for this type of product.

How is this any different from just aiming your conventional home security camera out the window? That can be done, but in my experience, it doesn’t work very well. Because the camera wouldn’t be flush against the glass, its sensor could be tripped by reflections of it from inside your home. Window glare is another problem, and the quality of the image suffers from the distance and glass between the camera and the outdoors. The HomeHawk Window Camera has been engineered to deal with all of these factors.

The camera’s flat, rectangular shape is a lot different from other indoor cameras, but it includes all the features we’ve come to expect from these security tools. It has a wide 150-degree viewing angle and captures video in 1080p resolution. It detects motion and supports person detection and custom detection areas. It even has color night vision, thanks to a proprietary, high-sensitivity CMOS sensor.

Panasonic includes detailed instructions for setting up and mounting the camera. The first step is to clean the window where you want to install the it, both to improve the camera suction and enable a clearer image through the glass. Next, you’ll need to insert a microSD card, which is not included. The camera records all video locally and Panasonic says a 32GB card, the max supported, will hold about 10 days’ worth of clips.

With the window and camera prepared, you need to plug the HomeHawk into an adjacent outlet and download and register an account in the HomeHawk mobile app. After you add the camera in the app, it will prompt you through a series of steps to connect to the camera via Bluetooth, and then connect the camera to your Wi-Fi.

The last step is to mount the camera—you remove the transparent film over the front of it, then place it on the window and, while pressing it firmly against the glass, pull up a “lock” lever to secure it. The process was seamless for me and took about 20 minutes from start to finish.

I ran into one of the limitations of a window camera during installation—you need to have a window that overlooks the area outside that you want to monitor. I wanted to use the camera to watch the driveway to our property, but the only portal I have with a view on it is the sliding glass door in the upstairs bedroom that faces our street. That means the camera had to face the street as well, so I had to place it so that it captured the driveway within that larger frame.

It was an imperfect solution; I could only see the very entrance to the driveway, so once someone crossed it they were out of the HomeHawk’s field of view. And with the camera trained mostly on the street itself, there was a constant parade of cars passing in front of it all day that I would have to deal with when I eventually figured out the motion-detection settings.

The HomeHawk’s image quality very good, much better than I expected to get through a double pane of glass. The color night vision is impressive, too, providing enough brightness to identify people’s faces and details like the color of their hair and clothes. There is noticeable fisheye distortion of the image, though. Hopefully, this will be addressed in future versions; there are wider-angle cameras that have a much less pronounced fisheye effect.

The HomeHawk app needs some work, though. When you open to the live-feed screen, it looks much like any other home security camera’s. Live video is displayed at the top, with buttons for taking a screenshot, manually recording video, and enabling motion tracking—which places a blue box around moving objects so they’re easier to follow—on a toolbar below it. The bottom half of the screen is where event clips are displayed, along with buttons that let you filter them by a different criteria, such as event-triggered recordings and those that have been recorded manually.

But navigating the app isn’t at all intuitive, as I found when I realized the camera wasn’t recording anything or pushing me any alerts. In the notification settings in the Setting menu I found a message that says “The ‘Motion Detection’ notifications can be changed from the mode settings,” but I couldn’t find anything labeled “mode settings” anywhere in the app. I eventually stumbled upon them when I tapped something labeled “Basic,” with no explanation of what it was, on the app’s home screen. It turns out this is where you select from one of three preset modes: Basic, which only captures live video and is the camera’s default; 24/7, which enables continuous recording; and Protection, which enables event recording and notifications. There’s also a Custom option where you can set your own parameters.

Once I enabled Protection mode, the camera started sending me motion alerts and automatically recording video triggered by movements. Unfortunately, it was recording and notifying me about every car that passed down my street. I assumed there would be a way to turn person detection on, and by extension, general motion detection off; but apparently, HomeHawk’s detection doesn’t work that way. Both types of detection are active at the same time. Again, some kind of documentation in the app would’ve helped here. Ultimately, I solved the problem by lowering the detection sensitivity and creating a detection zone around the driveway entrance by blocking out the rest of the frame in the app.

Detection worked well once I sorted it all out. People were consistently identified apart from other types of motion, and alerts were timely and included a screenshot of the triggering event. You can play back video clips one at a time or in Rapid Playback mode, which time-lapses you through all the video clips in your timeline.

The HomeHawk Window Camera shows plenty of promise with its easy installation, excellent image, and accurate event detection. The HomeHawk app needs improvement, though, to bring the experience up to par with other home security cameras. Fortunately, that can be done relatively quickly through app updates, so it shouldn’t deter you if you’re looking for a way to monitor the area outside your home without the hassle of potential camera theft, complicated installations, and poor wireless signal strength. This camera has a lot of potential.