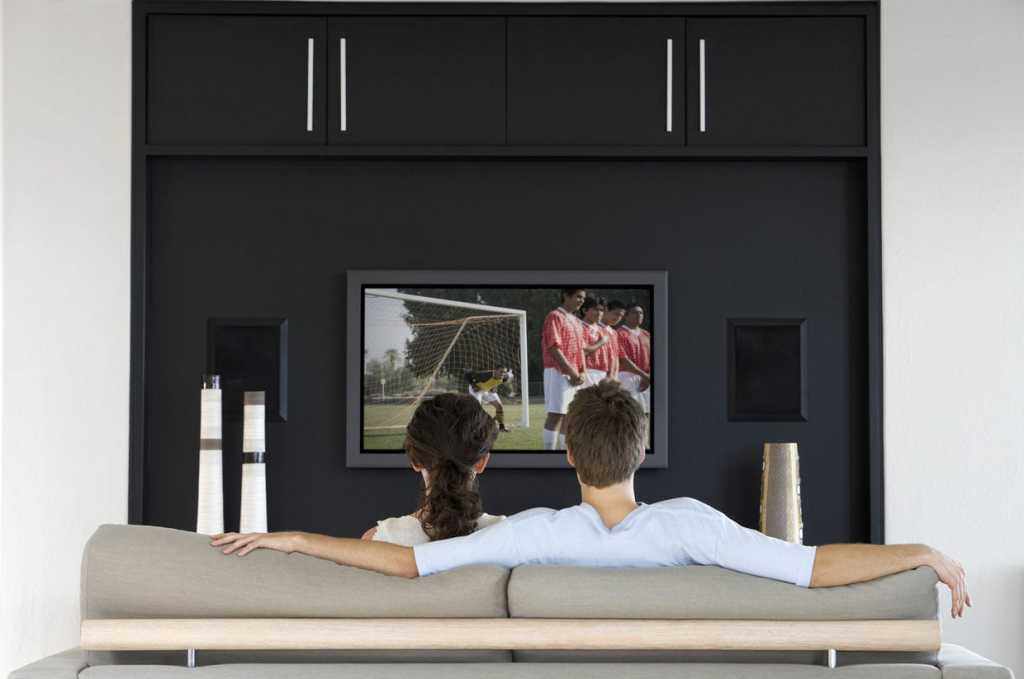 It’s the same trend, year in, year out: TVs get ever bigger—and ever cheaper. There was a time when a 55-inch TV seemed gigantic; now, 75-inch sets are becoming common. And if every room in your home was an oversized living room, we’d say buy the biggest TV you can afford and move the couch to the appropriate distance.

But that advice doesn’t work for dorm rooms, micro apartments, small bedrooms, and the typical home office, where a large display would simply be out of place. What’s more, some people—including this writer—just don’t want a massive screen to be the dominant feature of their living space.

The problem with buying small, however, is that it nearly always means getting a TV that delivers a less-than-state-of-the-art image. As I wrote this, there were exactly two sets smaller than 55-inch class that could be referred to as top tier: the $1,800 Sony A9S Master Series; and the $1,500 LG 48CXPUB, both of which are 48-inch class OLEDs.

But before I dive deeper, allow me to present a brief treatise on size versus viewing distance.

To see the entire screen without experiencing eyestrain, or beholding a sea of individual dots instead of a field of dreams, you should sit back at least 1.5 times the diagonal size of the TV. With a 55-inch-class TV, for example, your seating position should be 82.5 inches away. This is a ballpark figure that will change slightly if the TV is curved, the pixels are further apart than normal (i.e., the TV has a high dot pitch), you’re in someone’s way, and so on

1.5X is considered the best compromise between an immersive experience and your ocular and mental health. Personally, I find it too close. I have a 43-inch unit sitting almost 10 feet away—three feet farther than the minimum and nearly 3X the diagonal size. This is simply a matter of taste. I had a 55-incher and I got rid of it, albeit not because the image was too large, but simply because it took up too much space.

I’ve heard a smattering of complaints about the lack of high-end TVs in smaller sizes over the last few years as increased screen real estate became a thing in the industry. But recently, three IDG employees in the span of two weeks offered unsolicited comments along those lines. When I said they had to shop mid-range models if they wanted a smaller TV, eyebrows raised.

That brings me to the heart of the dilemma that’s the focus of this article. With the exception of the aforementioned, Sony and LG OLEDs (both use the same LG-manufactured same panel), top-tier technology simply isn’t available in smaller TVs.

Manufacturers have given me valid economic arguments for going large, including panel yields and consumer buying trends, but the bottom line is that manufacturers make more money selling larger TVs. I think they’re missing a bet, but in a very competitive market plagued by very tight margins, my argument is a tough sell. I understand their motivations. I just don’t like the situation.

Not to deflate my argument entirely, but beyond entry-level—aka, the cheapest thing you can buy—TV technology has improved drastically in the last five years. What I didn’t tell you about my 43-inch TV is that it’s a TCL 5-series. It’s a decent step above entry level, but it’s nowhere near a top-tier TV. That said, it is light years beyond what was available at the price just a few short years ago.

I realized long ago that if the game or movie is compelling, I never even think about the TV. If it stinks, all of a sudden I notice every flaw. Arguments from both points of view aside, if a 43-inch 4K or even 1080p OLED was available, I’d buy it. Yes, the majority of what I watch is in 1080p. Go ahead, call me a Luddite.

My ear to the ground tells me that consumers’ love affair with cinematic-scale TVs might be waning. Or perhaps that portion of the market is simply saturated. Whatever the reason, there could be a swing back to high quality in smaller sizes in the near future. Maybe not. Make some noise if that’s what you’re craving. I do.

Fortunately, the industry might already be circling back to high-quality small TVs. The availability of a couple 48-inch OLEDs from high-end manufacturers would seem to indicate that. And LG Display—the LG division that manufactures the OLED panels that Sony, Panasonic, and of course LG Electronics uses to build OLED TVs—announced at CES that it planned to start making 42-inch OLED panels in 2021. Woohoo! Fabbing panels in 2021, on the other hand, likely means TVs with those panels won’t show up until 2022.

Of course, as I’ve already discussed, top-tier technologies eventually drift down the food chain. But that can be a long wait. Here’s to sooner rather than later!