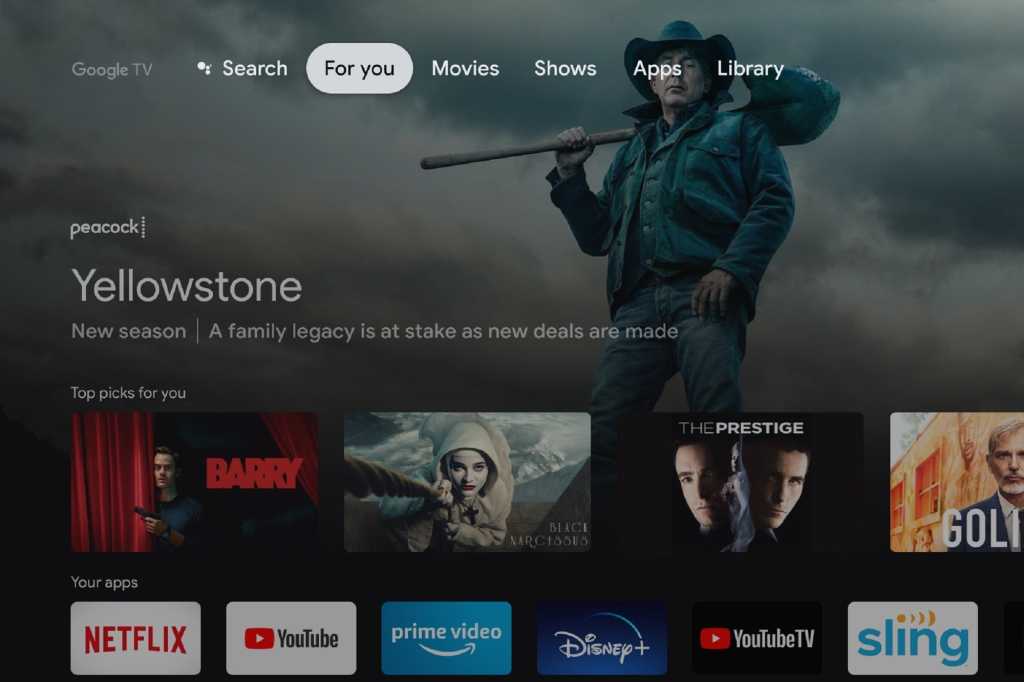 When I reviewed the new Chromecast with Google TV in October, I gave it a strong recommendation in large part because it played nicely with Netflix.

In contrast to Roku players and Amazon Fire TV devices, the new Chromecast doesn’t make you jump through multiple apps just to see what you can watch. Instead, it offers its own top-level menu system for browsing the catalogs of Netflix, Hulu, Amazon Prime, Disney+, and several other streaming services. To me, this approach represents the future of streaming, and it seemed like Netflix was ready to embrace it.

That changed last week, when Netflix’s Google TV integration collapsed without explanation. While the Netflix app is still available on the new Chromecast, Netflix’s original movies and shows no longer appear in the Google TV guide, and you can no longer add Netflix originals to your watchlist.

The sudden reversal blows a big hole in Google’s plans to make sense of streaming, but it’s also a raw deal for anyone who already bought the new Chromecast (or worse yet, prepaid for six months of Netflix to get the device for cheap). Without the backing of the biggest subscription streaming service, Google’s TV guide is suddenly a lot less universal.

We’ve seen this sort of thing happen with Netflix before.

Apple, for instance, offers its own universal streaming guide on Apple TV boxes, but it doesn’t integrate with Netflix either. On Roku players, the “My Feed” feature that alerts users to new seasons of TV shows doesn’t work with Netflix, and back when Microsoft was pushing the Xbox as an entertainment hub, its own attempt at a universal guide didn’t include any Netflix content. On previous versions of Google’s Android TV software, Netflix also hasn’t supported the “Play Next” row that lets users quickly resume shows that they’re already watching, despite earlier promises to do so.

In the past, we might have attributed this to skittishness on the part of all streaming services, which generally don’t want their own apps to be rendered irrelevant. But as time goes on, other services like Disney+, HBO Max, and Amazon Prime have all integrated with universal guides like Apple’s TV app and Google TV. Netflix is exception to the rule.

The overall picture is of a company that’s extremely touchy about making content available outside of its own app, where it can fully control the experience and try to keep users hooked. While Netflix generally supports search features on streaming devices, it’s been far less receptive to alternate means of navigating the Netflix catalog.

None of that explains why the new Chromecast with Google TV launched with Netflix integration in the first place, only to have it hobbled later, but my attempts to get answers from either company yielded nothing of substance. Google simply said that the level of integration on the new Chromecast can vary by partner, and Netflix said it’s trying to ensure a consistent experience across devices.

That means we can only speculate on what’s really happening. On Android devices, Netflix currently lets users sign up through the app with a credit card instead of Google’s in-app purchase mechanism (from which the search giant gets a 30% cut), so maybe Google’s plans to crack down on such behavior soured the relationship between the companies. Maybe the integration created some friction between Netflix and its other device partners that don’t enjoy the same integration privileges. Or maybe Netflix just saw some element of the Google TV experience that it didn’t like.

In any case, the comments I got from Google and Netflix both had an air of finality to them, so I wouldn’t count on the integration coming back anytime soon.

For folks like me who still dream of a truly universal streaming guide, what can you do?

If you haven’t already bought the new Chromecast with Google TV, the TiVo Stream 4K suddenly looks more appealing. It offers a similar streaming guide that still integrates with Netflix—it’s unclear how that’s being permitted, though I also have theories there—and has ironed out some of the initial kinks I experienced in my review. And while its live TV menu doesn’t tie into YouTube TV like Google’s streaming player, it does work with Sling TV and Pluto TV instead.

You can also use a third-party streaming guide app such as Reelgood or JustWatch to manage a watchlist and browse for movies and shows. Both services offer apps on Android TV devices, including the new Chromecast with Google TV (for Reelgood, you’ll have to sign up for the beta first), and they provide similar guides to what Google TV offers. When you choose something to watch, they’ll take you right into the appropriate app to start streaming. You can even use the Button Mapper app to have either service launch when you press (or double-tap) your remote’s home button.

The other option, of course, would be to stick it out with Google TV. While Netflix originals aren’t integrated anymore, Netflix’s licensed movies and shows still appear in the universal guide, and you can still add them to your watchlist. Netflix originals also still show up in Google TV’s “Continue Watching” row, so if you start watching a show like The Queen’s Gambit inside the Netflix app, you can still quickly pick up where you left off straight from the home screen.

Besides, other major streaming services don’t seem to share Netflix’s hangups over universal streaming guides. As before, you can still use Google TV to browse the catalogs of Amazon Prime, Hulu, Disney+, HBO Max, Sling TV, and CBS All Access.

Without having to compete with Netflix recommendations, perhaps you’ll end up gravitating toward those services a bit more and using Netflix a bit less. And who knows? maybe you’ll even realize you don’t need a Netflix subscription as much as you thought, especially when it’s erecting unnecessary barriers between you and its content.