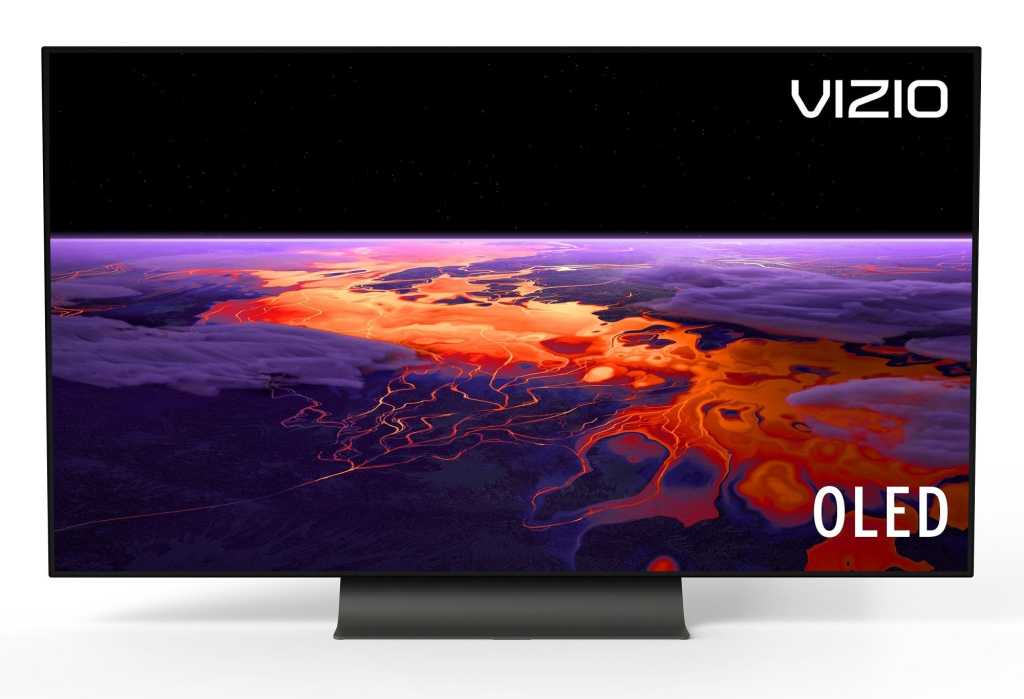 Vizio’s OLED TV delivers the lush image quality that the technology is famous for at a price lower than the competition (LG and Sony). LG and Sony, however, both deliver stronger image processing (and Bluetooth, too).

Known for delivering bang-for-the-buck home entertainment products, Vizio made news earlier this year when it announced it would join LG and Sony in offering a line of OLED TVs. Vizio sent its 65-inch-class model OLED65-H1 for us to evaluate.

This review is part of TechHive’s coverage of the best smart TVs, where you’ll find reviews of competing products, plus a buyer’s guide to the features you should consider when shopping for this type of product.

Vizio’s 65-inch class (64.5-inches diagonally) OLED TV is a 4K UHD model delivering resolution of 3840 x 2160 pixels with 10-bit color at a 120Hz refresh rate. It weighs a hefty 61 pounds (add 10 pounds for the stand), but once the pain of installation is over, you have a real looker on your hands. The bezel is super thin, but still visible (my preference), and the mid-mount pedestal stand looks fantastic by my lights. It also makes it possible to set the TV on much narrower tables, supports, or a soundbase. There’s also a 300- x 200mm VESA standard mount point if you want to go the wall-mount route.

On the back of the unit, you’ll find four HDMI 2.1 ports. Ports 1 and 4 offer bandwidth of 18Gbps (Port 1 also supports eARC), while ports 2 and 3 support HDMI 2.1’s full 48Gbps for higher refresh rates, more color, and 8K signals. If you weren’t aware, vendors are free to implement HDMI 2.1’s features in any combination they see fit. Yup, that’s what they call a standard these days.

Also on hand are composite in, a single USB port, coax for connecting cable/satellite or an antenna input, digital and analog audio outputs, and ethernet. There’s an 802.11ac Wi-Fi adapter onboard, there’s one big omission: Bluetooth. This might not be an issue for many users, but if you want to use wireless headphones, add $30 minimum for an outboard Bluetooth transceiver. You’ll also experience greater lag than some TVs with integrated Bluetooth and latency compensation. Consider that when comparing prices.

Both Apple AirPlay 2 and Chromecast are supported, as well as Google Assistant and Amazon Alexa. The TV will also decode Dolby Vision, HDR10+, HDR10, and HLG high dynamic range content. The HDR10+ support is a first for me on a non-Samsung TV. And of course, there’s a game mode to reduce latency when fighting dragons.

I quite like Vizio’s SmartCast operating system/interface. It put things in logical places and it’s easy to navigate. One thing I do not like, however, is that if your broadband connection goes down for whatever reason, SmartCast just doesn’t show up. You can still watch broadcast or cable TV, and you can view content on any connected device (a Blu-ray player, for instance, or a USB stoarge device), but it’s a bit unnerving for your homepage to simply disappear.

The remote control isn’t anything to write home about. Let’s say average for a mid-range TV. It’s on the long side, but efficiently laid out and it provides voice control for the supported assistants. But if you’re a phone-centric viewer, there’s also a SmartCast app that you can use in place of the remote and onscreen interface. This app can also be used to listen to the audio via headphones, but I’d rather have the Bluetooth.

That vast majority of users could watch the Vizio OLED all day long and be perfectly happy with it. It is OLED after all, which means velvety blacks, accurate color, and great contrast. That said, this TV’s image processing isn’t quite in the same league as LG’s and Sony’s—that’s particularly true of the former.

With normal material, I only noticed some slight flicker and moiré in highly detailed areas during slow pans. But there was considerably more of it than I’ve seen on its rivals. On the other hand, turning off Hollywood’s Film Mode and upping the motion compensation (I had judder) created very smooth pans and action. The HDR effect with Dolby Vision and HDR10 was noticeable, but not quite as vivid as I expected from an OLED until I boosted the default brightness.

Under stress testing using Spears & Munsil and similar benchmark materials played on an Oppo 4K UHD player via HDMI, there was a lot more glitching than with the competition. Whenever I navigated back to the main menu, for example, the screen would scramble and jump for a brief instant. The Vizio also completely failed at creating black dots on a white background, displaying instead funny distortions running vertically down the edges. It did the white correct.

There were also a lot of issues with non-parallel fine lines and patterns, which almost always translates to the issues with flicker and moiré you see in real-world material. It’s rarely enough to hit most viewer’s radar, but it’s there.

On the other hand, brightness was more than adequate, screen conformity is nearly perfect, viewing angles are more than wide enough, and being OLED, there are zero issues with light bleed. Blacks are magnificent, as they should be.

Most of the time, I find that my TV tweaks offer little to no improvement in the overall image. With this OLED, however, I increased the color saturation quite a bit before I was happy. This reminded of days past when Vizio sets came from the factory so poorly adjusted that tweaking was a necessity. But when you did, you wound up with a low-cost TV with almost as good a picture as the high-end Sonys of the time. Go figure.

I will give Vizio a shout-out for its media player. Where this was once so slow as to be unusable, it’s now as quick as the competition’s, if not as slick looking. I play movies off of a NAS box and this ruled out Vizio for me. Kudos for fixing that long-standing complaint.

To sum things up, the Vizio provides a very good picture for everyday use, though you might notice slight artifacts on occasion. For normal viewing, 90 percent of the time, Vizio’s OLED matches its OLED competitors. SmartCast, meanwhile, is one on the better TV operating systems, and you have the option of controlling the TV with your smartphone or tablet.

Vizio’s OLED is quite a bit cheaper than Sony’s OLED, but the price difference narrows considerably when compared to an LG OLED. Sony’s and LG’s TV deliver better fine-detail processing and Bluetooth without needing to buy an accessory. Which combination of price, performance, and features equals the best value? That’s for you to decide