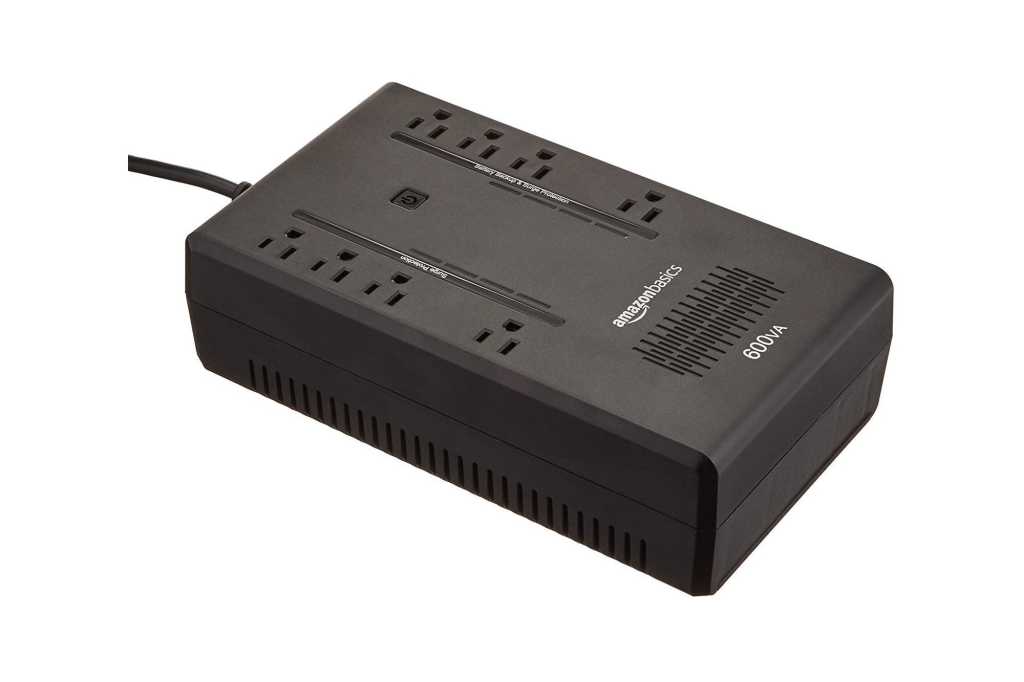 This AmazonBasics uninterruptible power supply works as advertised, but it lacks features needed for computers and its performance is outmatched by similarly priced competing models.

The AmazonBasics 8-outlet uninterruptible power supply (UPS) supports up to a rated 360 watts of attached equipment, which it can provide with enough battery power to run a modest computer system with a smaller monitor for about 3 to 10 minutes. This delay lets a computer shut down automatically using built-in features in the operating systems or software provided for macOS and Windows if electrical power isn’t restored quickly enough.

This is a standby UPS that produces a simulated sine wave—the change in voltage from negative to positive and back in alternating current (AC) power—so it’s not recommended for most modern computer systems that use a power supply that requires a smoother, or “pure” sine wave output from a UPS. Standby UPSes also have a short delay in cutting over from line power to their internal battery, which for some equipment can be too long.

Instead, consider this AmazonBasics UPS just as an option for keeping networking hardware going during a power outage, as well as blocking surges and bolstering power during brownouts to equipment. That could include a broadband modem, Wi-Fi gateway, and ethernet switch that consume less than 100 watts of power combined.

That would allow this unit to bridge quick outages and keep power running for as long as 20 minutes based on Amazon’s estimates. (Look up the specs on devices or at manufacturers’ sites for all the equipment you want to connect to the battery-backed outlets and add their wattage together to get a maximum load factor.)

Amazon offers a wide array of products in its AmazonBasics line-up that trade a non-Amazon brand-name manufacturer label on the box for ostensibly a lower price for something of high quality. That promise falls short here. While this unit works as expected, it’s not price competitive with brand names that offer more: more features, more power, and a longer warranty.

Provides the basics for network devices

This is a standby UPS, which kicks in battery power as it’s needed, including when line-voltage slumps (a “brownout”) and to provide juice during an outage. It also includes protection against short leaps in voltage in the same manner as a standalone surge protector.

This kind of UPS is cheaper than a line-interactive model, which conditions power continuously, and it can supplement power sags and remove minor surges without leaning on the battery. A standby unit should have the advantage of lower cost, and should work just fine in most normal conditions. However, because it takes longer to kick in power than a line-interactive UPS, it may not switch over to its battery fast enough to prevent a computer from crashing.

Amazon equips the UPS with eight outlets, four of which are connected to both surge protection and backup power, while the other four provide just surge protection. This is typical for UPSes, allowing you to get two kinds of benefits in one model.

The outlet pattern is a little close together if you have several devices that rely on the wall-wart style of DC adapter. The UPS has one outlet in each group of four that’s 2.25 inches away from the next group of three, which are spaced 1.25 inches apart. Outlets are spaced correctly for standard 2-prong and 3-prong cords used in electronics.

Simplicity is the watchword on this model, which has a single button on the top that powers the unit on and off, and also manages some alarm-sound settings. Its LED lights up green in normal use and flashes (along with beeps) when it’s in battery mode and when its battery is about to be depleted.

It lacks an alert for wiring faults, a nice extra on most UPSes that can alert you to dangerous home-wiring issues.

This Amazon model produces a simulated, “stepped” or chunky sine wave for alternating-current (AC) power output, as noted earlier, instead of the smooth sine wave that comes out of a wall socket—and which can be produced by slightly more expensive UPS models. A simulated sine wave can interact poorly with computers that use modern power supplies with active power factor correction (PFC), which use power more efficiently and can automatically adjust voltage without manual switches or modifications across power systems used in different countries.

For voltage correction and short periods of time, a stepped sine wave is not likely to cause substantial problems, but the power supply might produce a high-pitched whine. If you have expensive hardware or experience frequent power sags and short outages, however, pick a pure sine wave UPS, often a feature of line-interactive UPSes. It’s worth the often only slightly higher price with modern UPSes to avoid the potential of power-supply damage. Line-interactive units also switch over to battery power substantially faster than most standby units, preventing the possibility of a computer crashing due to a short absence of juice.

Check your computer system to find out if it uses active PFC; it’s sometimes listed in a technical specifications list by the manufacturer, but often you have to dig to find the information. A power supply that automatically switches among voltages used by different countries’ power systems without requiring a switch to be set is almost certainly using active PFC.

If you wind up using the UPS with a computer, you can connect it via an included USB cable and install software provided by Amazon, or rely on options built into the operating system. This includes notifications when power sags, when the battery kicks in, or when the battery is running out of juice, as well as triggering an automatic shutdown.

The software Amazon offers provides additional statistics and other controls beyond that built in to macOS and Windows. While Amazon product reviewers said the software allows tuning certain low-level electrical features, that feature wasn’t present in the latest release. The software also isn’t mentioned in the included manual and must be downloaded from the UPS product page at Amazon, where the link for macOS and Windows versions are in small type.

Amazon often contracts third parties to make its AmazonBasics-branded goods, and CyberPower is the creator of this UPS, which closely resembles some CyberPower models. Like the software branded by CyberPower, the AmazonBasics download for macOS isn’t released using a standard, secure method Apple offers to prevent malware installation, and which costs a developer a mere $99 a year to participate in. Mac users will find themselves baffled trying to launch the software, which requires a special sequence in macOS to bypass security precautions that prevent such “unsigned” software from running.

While the AmazonBasics model works with Windows and macOS power-management features, an extra feature of the custom software is that it lets you directly configure some audio settings for when the UPS beeps or produces a continuous sound. The hardware power button allows access to only a few of those features. (A more up-to-date version of the software directly from CyberPower offers more features and appears to work fully compatibly.)

Amazon offers a fairly paltry one-year limited warranty that includes repair or replacement of the device for manufacturing defects, and repair or replacement of up to $75,000 of properly connected covered electronics if damage occurs while the UPS is appropriately connected to power. Owners have 30 days from an incident to file a claim. The warranty details are not included with the product, but only available as a download from the Amazon product page.

At the price Amazon offers the AmazonBasics eight-outlet, 600VA/360W UPS, you should instead consider a competing product from the white-label manufacturer who produced this model for Amazon: CyberPower. The eight-outlet, CyberPower ST625U Standby UPS (625VA, 360W, 8 outlets) costs almost exactly the same, has two USB charging ports you won’t find on the AmazonBasics model, has more conveniently placed and oriented outlets, and it comes with a robust three-year warranty. CyberPower includes a later version of its UPS management software, but it suffers from not being a properly signed app in its macOS version as well.

The AmazonBasics 600VA, 360W, 8-outlet Standby UPS is a solid-enough product, but has nothing going for it at its price compared to its peers.