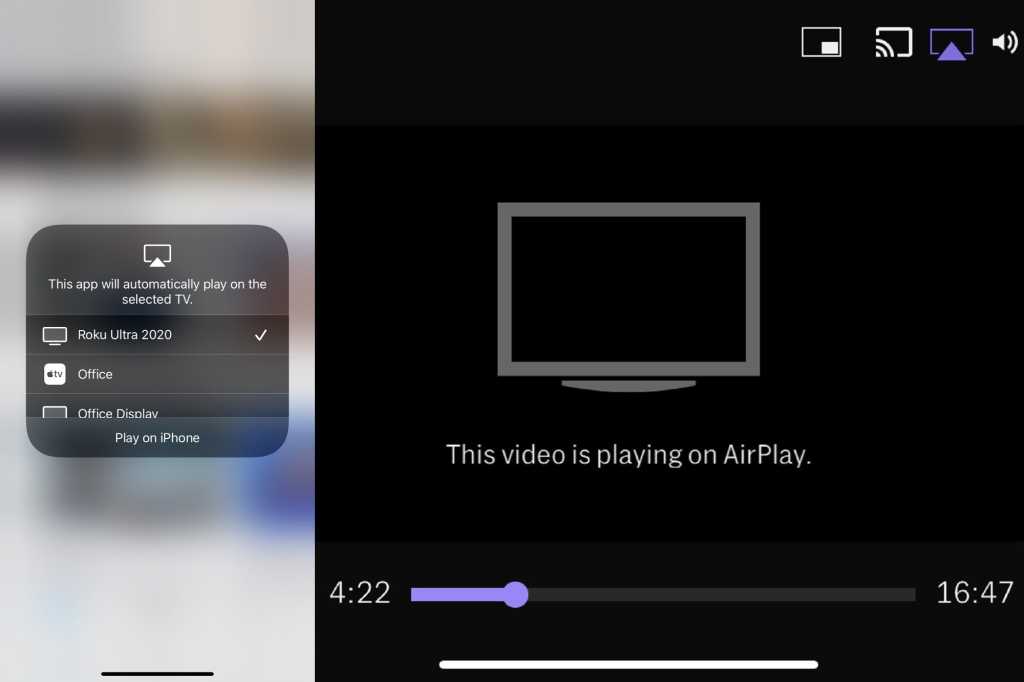 A bunch of Roku players just got a lot more useful this week with the launch of Apple AirPlay and HomeKit support.

If you have a supported 4K Roku player or TV and either an iPhone or iPad running at least iOS 12.3, you can use AirPlay to send videos, music, and photos to your TV from a wide range of mobile apps. This is the first time AirPlay has been available on streaming boxes and sticks other than Apple’s own Apple TVs (though some recent smart TVs support AirPlay as well). With 4K Roku players starting at $40, versus $180 for the Apple TV 4K, they’re a much cheaper way to add AirPlay to any television.

While it might seem like a small feature, AirPlay adds a lot of capabilities that Roku previously lacked, including HBO Max support, easy music playback from your phone, and even big-screen video chat. I’d argue that the arrival of AirPlay is Roku’s most substantial software update in years.

Here’s a rundown of some things you can now accomplish on certain Roku players that were difficult or impossible to pull off before:

With AirPlay support, there’s finally a workaround for Roku’s missing HBO Max support: Just connect an iPhone or iPad to your Roku via AirPlay, then use the HBO Max mobile app to start playing a video. You can activate AirPlay in either of two ways:

In both cases, the video should pop up on your TV in full resolution, with playback controls appearing on your phone or tablet. You can also use the regular Roku remote to pause, fast forward, or rewind.

HBO even seems to be encouraging this workaround, with its AirPlay help page calling out Roku support in particular. It’s the best way to watch HBO Max on Roku devices while the two companies work out their issues.

Use your phone as the remote

Of course, AirPlay support works with lots of other video apps as well, including Hulu, Disney+, Amazon Prime, and CBS All Access. Just use the same methods as described above to start playing video on the big screen. If you’ve already got your phone in-hand, this might be faster than reaching for the remote.

Turn off your Roku (finally)

One longstanding quirk of Roku players is that you can’t directly turn them off. If your Roku remote has a power button, it can turn off the TV, but the Roku itself will stay on. And if you forget to turn the TV itself off, the Roku screensaver will run indefinitely.

It’s another area where Apple affords a workaround, thanks to HomeKit support:

Now, hold the power button on your iPhone or iPad and say “turn off the [room name] TV,” and your Roku will power off accordingly. If you head to the Automation tab in Apple’s Home app, you can also set up the Roku to automatically turn off when everyone leaves the house.

While this year’s Roku Ultra supports Bluetooth for playing music or podcasts from your phone, other Roku players aren’t so lucky. In those cases, you’re limited to Roku’s own selection of apps, which isn’t bad, but is missing certain sources like Apple Music, Overcast, and Spotify Stations. Besides, searching for artists on your phone is easier than thumbing around with a remote.

AirPlay turns Roku into a much more versatile music player. Just follow the same playback instructions as you would for other apps like HBO Max to start playing your tunes.

Launch music and video with Siri

For an even faster way to play videos or music, try using Siri. Once you’ve set up HomeKit to turn your Roku on and off, you can also say things like “Watch Eater’s Guide to the World in [room name]” or “Listen to Thundercat on Spotify in [room name].” Your Roku should load the appropriate content with no further input. I’ve found this to be more reliable with music than with video, but it feels pretty magical when it works.

As an AirPlay device, Roku players can be part of a whole-home music setup alongside other AirPlay speakers or soundbars. Just open up Control Center on your iPhone or iPad, then select the AirPlay speakers you want to play on.

(Fair warning: I did notice a delay between the Roku connected to my office TV and the Sonos Beam soundbar in my living room, and unfortunately Apple doesn’t provide a latency correction feature for AirPlay speakers.)

Mirror your iPhone or Mac screen

Roku’s mobile app is a nice way to view photos on your television, but only if they’re stored on your phone. For photos from other sources, such Google Photos, iCloud, or Instagram, you can use screen mirroring. While Android devices have been able to mirror on Roku players for years, AirPlay finally makes it possible for iPhones and iPads.

Just open Control Center, select Screen Mirroring, then choose your Roku from the device list. Anything that appears on your iPhone or iPad display will then be reflected on the TV. (For Macs running MacOS Mojave 10.14.5, you can also mirror the screen using the AirPlay button in the menu bar.)

Of course, screen mirroring has other uses beyond photos. You can also communally browse the web, view presentations in apps like PowerPoint, or show off your gaming skills in real-time. Best of all, you can use apps like Facetime or Zoom to show your video chats on the big screen.