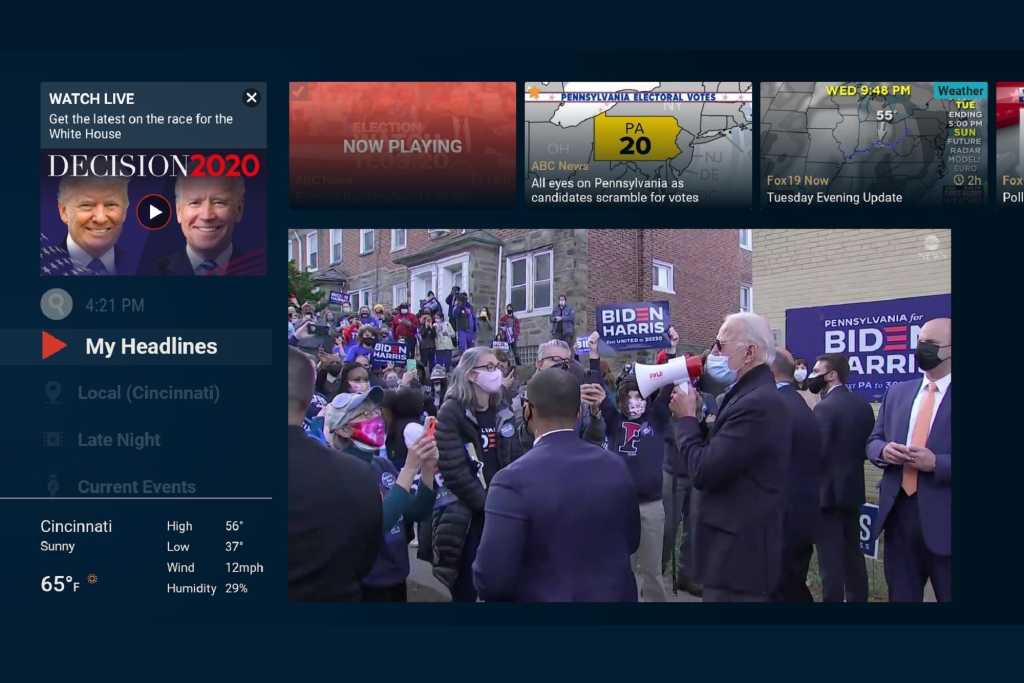 There are many ways to watch the news without an expensive TV bundle, but during a wild election week, I want to highlight one in particular.

It’s called Haystack News, and while it’s been flying under the radar as a streaming-news option for years (under the name Haystack TV until recently), I think it’s worth another look. Haystack’s been making some major improvements lately, with more local news sources, live streams from national news sources, and an interesting “ticker” with weather and other useful tidbits.

Although the app still feels in some ways like a work in progress, it’s been my preferred way to stream the news in a week full of it.

The Haystack app is a free download on Roku players, Amazon Fire TV devices, Apple TV boxes, and Android TV devices. It also works with Chromecast and is available on smart TVs from Samsung, LG, and Vizio.

Haystack’s main claim to fame is the way it pulls in video stories from lots of disparate sources—both local and national—essentially giving you a personalized newscast. When you open the app, you might see a story from ABC News recapping election day, followed by a weather forecast from one of your local stations, followed by a story from Newsy on the MLB’s Gold Glove winners for this year.

But instead of just watching that pre-arranged playlist, you can also scroll back and forth between stories or drill down into individual categories, such as local news, election coverage, and even clips from the late-night comedy shows.

This week, Haystack also added live streaming news channels from ABC, CBS, Newsmax, Euronews, Yahoo Finance, and several others; so, instead of just watching news clips that have already aired elsewhere, you can see what’s happening in real time. (No such luck if you’re looking for live cable news channels like CNN, Fox News, or MSNBC; you’ll still need a bundle of pay TV channels for those.)

Taken individually, none of these features are unique. The personalized newscast concept is also available through Plex, and there’s no shortage of short news clips to watch on YouTube. Haystack’s live news channels are also readily available elsewhere, through free apps like Pluto TV, The Roku Channel, and Tubi (which just added a news section). You can even get local news through other apps like NewsOn, Vuit, and Stirr.

But in a way, Haystack is greater than the sum of its parts.

For instance, you can navigate the entire Haystack app with video still occupying most of the screen, so there’s no interruption while you look for other stories to check out. In the live section, it’s easy to flip back and forth between channels, even when one of them cuts to a commercial break.

Haystack even has a clever little news ticker that appears at the bottom of videos in full-screen mode, cycling between your local weather, stock prices, and headlines. You can then click down to any of those ticker stories and switch to the video in question. As a way to watch the news, it all just feels more holistic than the disparate channels or video clips in other apps.

Where Haystack could be better

So what’s the downside? For now, the biggest issue with Haystack is that it just doesn’t work with enough news sources. On the political front, right-leaning cord-cutters might take issue with the lack of Fox News clips—Haystack doesn’t have a content deal with the channel—and there’s no coverage from CNN or NBC. Topics outside general news realm are lacking as well, with no PeopleTV or TMZ for entertainment news, no sources of gaming coverage other than GameSpot, and no dedicated sports news sources whatsoever.

And even for sources that are on Haystack, some of them can be strangely hard to find. Bloomberg and MSNBC, for instance, only show up if you search for them by name in Haystack’s customization menu. They don’t show up on the default selection screen when you’re setting up the app for the first time, so it’s easy to overlook that they’re available in the first place.

While I’m nitpicking: Haystack also has a section of its app called “Editor Picks,” which sounds promising in theory, but as of those writing, the most recent story in that section is a day old, and the other picks are even older. Nearly all of them are irreverent stories that are unrelated to the election. The whole section gives the impression that Haystack is asleep at the wheel, and should be scrapped if the company can’t commit to curating it.

I’m recommending Haystack despite those gripes because the app’s foundation is solid, and even in its current form, it’s an engaging way to keep up with local and national coverage. I like the idea of having a single app that’s purpose-built for news consumption, and if Haystack’s app can scale up to more news sources, it could stand head-and-shoulders above the rest.