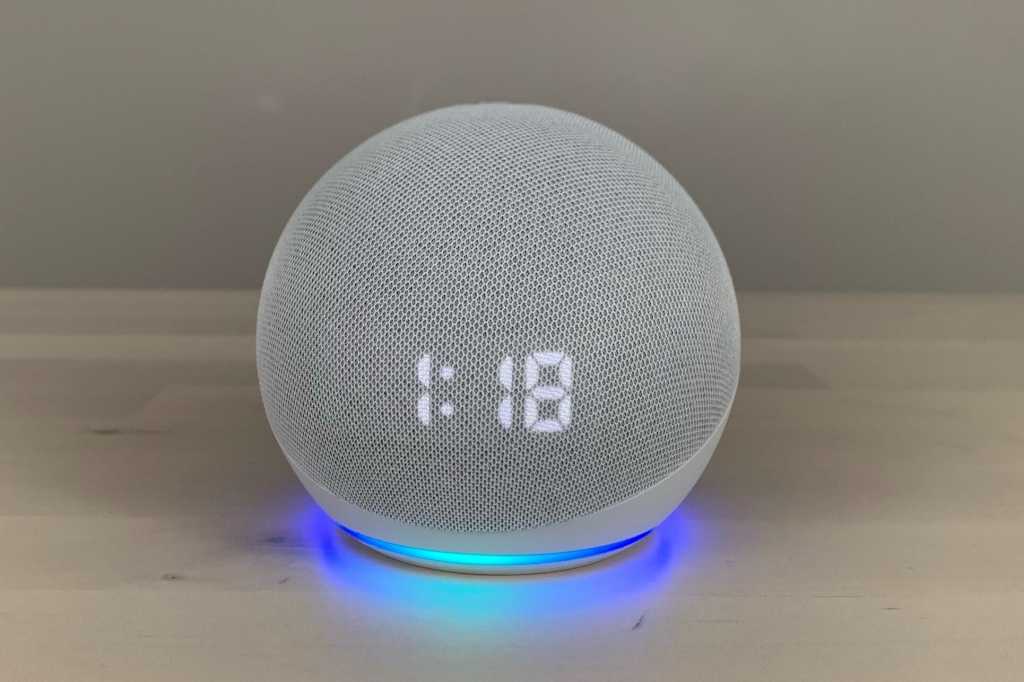 Aside from its new spherical design, the revamped Echo Dot with Clock doesn’t veer far from the original’s winning formula.

Like chocolate-covered peanut butter or eggs served with bacon, an Amazon Echo Dot with a built-in clock turns out to be a splendid combination. The latest Echo Dot with Clock doesn’t veer far from the original’s winning formula, serving up the same basic LED display baked into an Alexa-powered smart speaker. The only real difference this time around, aside from slightly improved audio, is a revamped spherical design that’s now shared by the standard Echo Dot and the flagship Echo model. While the new Echo Dot with Clock does represent a clear stylistic departure from the original, there’s no real reason to rush out and replace an existing one.

Available in “glacier white” and “twilight blue” flavors, the new Echo Dot with Clock got the same spherical makeover that the standard 4th-gen Echo Dot did. Measuring 3.5 inches tall and 3.9 inches wide, the Echo Dot with Clock is nearly two inches taller than its predecessor, although it’s roughly the same width. The Dot with Clock’s digital display peeks out from the speaker’s fabric covering, and an adaptive brightness setting dims the readout in a dark room. Last but not least, Alexa’s light rings have been moved (quite attractively) from the top of the speaker to the base.

This review is part of TechHive’s coverage of the best smart speakers. Click that link to read reviews of competing products, along with a buyer’s guide to the features you should consider when shopping.

Beauty is in the eye of the beholder, of course, but If you ask me, the LED display makes the Echo Dot with Clock’s spherical design look considerably more stylish, while also managing to avoid the “huh?” reaction that the standard, now-spherical Dot tends to elicit. Indeed, my wife and daughter (who were decidedly unimpressed with the regular Dot) were quite taken with the Echo Dot with Clock, and my 8-year-old immediately asked if the LED-equipped Dot could go in her room.

The Echo Dot with Clock features the same buttons as the standard Echo Dot, including volume up/down, microphone mute, and “action” buttons sitting on the top of the speaker. While the volume and mic mute buttons are self-explanatory, the “action” button does a variety of things, such as waking Alexa, silencing alarms, and (when held for 25 seconds) resetting the speaker.

The rear of the Echo Dot with Clock comes with identical interfaces as the new Echo Dot, including a 3.5mm audio jack for connecting a wired speaker (you can also connect a Bluetooth speaker), as well as a barrel-shaped power port for connecting the 5-foot AC cord. That power cable terminates in a chunky, 15-watt power supply that’s (unfortunately, and annoyingly) big enough to block nearby power outlets.

For details on how to connect the Echo Dot with Clock to your home wireless network, check out my review of the standard Echo Dot. The short version is that setting up the Echo Dot with Clock is a painless process, particularly if it comes pre-configured with your Amazon account (an option you can select while ordering the speaker).

If the Echo Dot with Clock is already set up with your account, all you have to do is plug it in and open the Alexa mobile app; when you do, an “Echo Dot can be set up” banner should appear. Tap it, and the Alexa app will step you through the process of adding the Echo Dot with Clock to your home Wi-Fi network. If the Dot with clock hasn’t been configured with your account, or you’re new to Alexa in general, you can simply tap More > Add a Device > Amazon Echo on the Alexa app to start the process. Either way, you should have the Dot with Clock up and running in a matter of minutes.

Functionally speaking, the display on the new Echo Dot with Clock works identically to its predecessor’s. When idle, the LED display shows the time, either in 12- or 24-hour formats. If you ask Alexa about the weather, the display will show you the current temperature, or it will flash the volume level when you press the volume buttons. The display can also show you how much time is left if you ask Alexa for a timer. Finally, you can turn the LEDs off completely if you wish, although I’m not sure why you’d want to.

And… that’s pretty much it, although it turns out that having an Echo Dot with an integrated clock is easily worth the $10 premium over the standard Dot, saving you the trouble of asking “Alexa, what time is it?” over and over.

Besides its built-in LED clock, the Echo Dot with Clock boasts precisely the same features, functionality, and audio quality as the standard, fourth-gen Echo Dot, and that’s mostly a good thing. Read on for a summary of what the Alexa-powered Dot with clock can do, or you can (again) check out my review of the regular Echo Dot for a more in-depth look.

As with the non-clock Dot, the Dot with Clock comes with onboard Alexa, a chatty, friendly, and intuitive digital assistant who never tires of reading headlines, reminding you of events, doling out weather reports, setting timers, and answering your most arcane questions (although with all of Google search at their disposal, Google’s line of Google Assistant-powered smart speakers is tougher to stump). Alexa is also compatible with more than 100,000 smart devices, and her multi-step “routines” make it easy to control multiple smart gadgets with a single command. There’s also Alexa Guard, which lets Alexa warn you if she hears broken glass, fire alarms, or other suspicious sounds.

Audio quality on both the Echo Dot and Echo Dot with Clock takes a marginal step forward compared to the meh sound of previous generations. Both versions of the revamped Dot are equipped with a single front-firing 1.6-inch driver, and in my listening tests (you can read more details in my review of the standard Echo Dot), the new Dot and Dot with Clock sounded cleaner and fuller than the last-gen speakers, which sounded thinner and overly boomy to my ears. That said, the audio quality on the latest Echo Dot with Clock isn’t vastly improved over the original.

No question, the revamped Echo Dot with Clock looks radically different than its predecessor, and with its prominent yet tasteful LED display, this new clock-equipped Dot ups the ante as far as looks go.