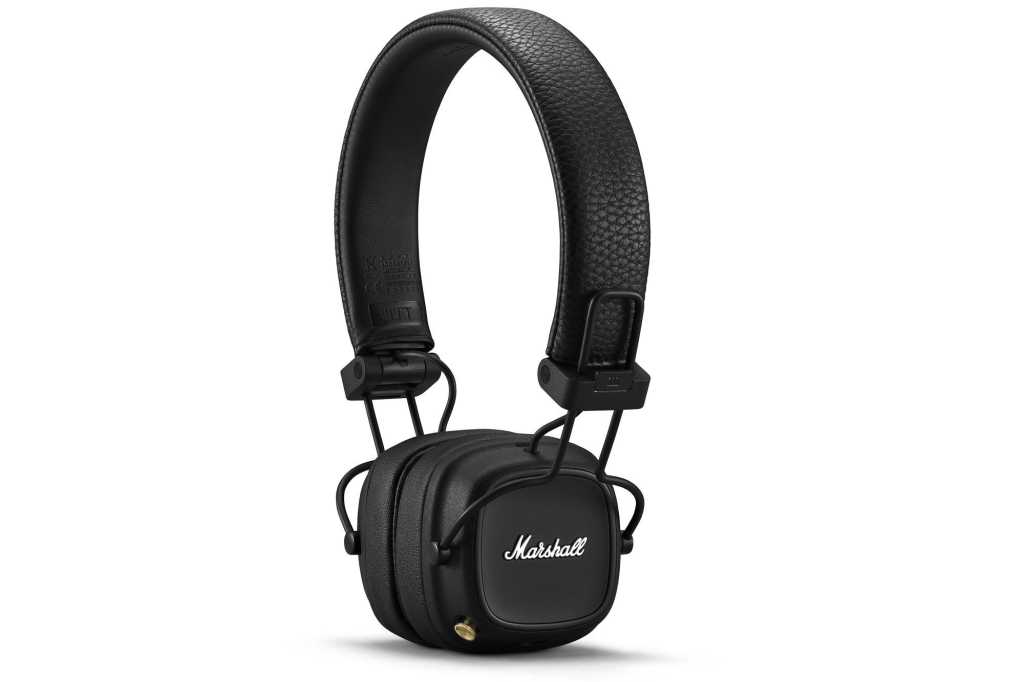 The Marshall branding on these on-ear headphones isn’t just window dressing, they are super comfortable and they sound excellent.

At first glance, I thought Zound Industries—the company that builds speakers and headphones under license from Marshall Amplification—had to be pulling my leg. The cups on the $150 Marshall Major IV aren’t big enough to fit around a five-year old’s ears, let alone an adult’s.

Then I put them on. I’ll be darned. There’s a method to this “on-ear” versus traditional “over-ear” madness.

I’d love to have been in the meeting where the idea for the first “on-ear” headphone was presented. Raised eyebrows aplenty I’m sure. I’m also sure doubts disappeared once the executives being pitched actually tried them. They can be pretty comfortable, and if the first batch sounded anything like the Marshall Major IV, those eyebrows raised once more for entirely different reasons.

So why does on-ear work? The fact is, headphones must make contact with your head at some point, and if they don’t put undue pressure on your outer ears, that can be as good a place as any. That said, it does take a bit of getting used to. At least it did for me—that the Marshall Major IV are on-ear headphones didn’t even register with one tester who commented only on the good sound.

Additionally, there are tons of headphones out there, and only the very best have ear cup cushions that keep your ears from uncomfortably contacting the rigid inner speaker grills. The manner in which the small cushions on the cups of the Marshall Major IV rest on your ears means you’ll never feel a hard, grating surface.

While the driver cavity centers nicely over your ear canals, the on-ear design does allow a bit more ambient noise into your ears than over-ear designs. Not a lot, but some. I like this, but you might not.

Inside the tiny cups are high-quality 40mm drivers. How do I know they’re high quality? Because these headphones sound excellent. But you knew that because you saw the Editors’ Choice logo up top. The Marshall Major IV utilize Bluetooth 5.0, and there’s a USB-C port for charging the battery (wireless charging is also supported, although only a USB cable comes in the box). The headphone also has a 3.5mm jack for hardwired use and the accompanying cable is a very nice wound, stretch type—-the best I’ve seen with a headset.

A tiny multi-function joystick is used to power-up and Bluetooth-pair these cans, adjust the volume, select the next/previous track, and invoke your phone’s digital assistant. It also controls your calls.

There’s a small learning curve associated with the joystick, which is colored Marshall gold, but it’s certainly easier than feeling around for multiple buttons once you’re accustomed to it.

The Marshall Major IV sound great, and for my personal tastes, they’re nearly perfectly EQ’d. The first word that crossed my mind when I played the first track was “tight.” The Marshall Major IV aren’t bottom-laden in the subwoofer sense, but there’s a quite a bit of extremely focused bass, meaning the bass skews ever so slightly toward the lower mid-range. You might also interpret “tight” as “punchy,” as in what I look for when I’m mixing the bass in my own music. I like it. Opinions, again, will vary.

Beyond that, the overall mid-range definition is excellent. I was easily able to pick out individual instruments, without their location in the sound stage being overly accented. The high-end is bright without being overly so.

Bottom line, the Marshall Major IV are some of may favorite headphones, and I’ll be putting them into my mixing collection. Hardwired of course. Though not listed as top dog by the other listeners I consulted, their opinions were universally positive.

I’d love to say that the headphones ran for the claimed 80 hours, but they lasted me a good week with a couple hours of use each night, and my review had a deadline attached to it. I intend to continue using these cans for a good long while, so I’ll write an update to this story if I discover the claim is exaggerated.

I have a late 1960s Marshall 1960A 4×12 speaker sitting in my office, and a 50-watt CODE amplifier in my music room. To me, Marshall is studio and stage gear, not consumer electronics. So, I’m glad the storied company has selected a quality manufacturer to license its brand.

The Marshall Major IV might be a little pricier than they could be, but the nostalgia surcharge isn’t excessive for a headphone that sounds this good.

Long term report 04/18/2021: While the Major IV’s aren’t as comfortable as over-ear headphones, they sound great and are easily the best I have tested long-term for battery life, quick charging, and reliably reconnecting via Bluetooth. Especially the latter which can be an issue with many headphones.