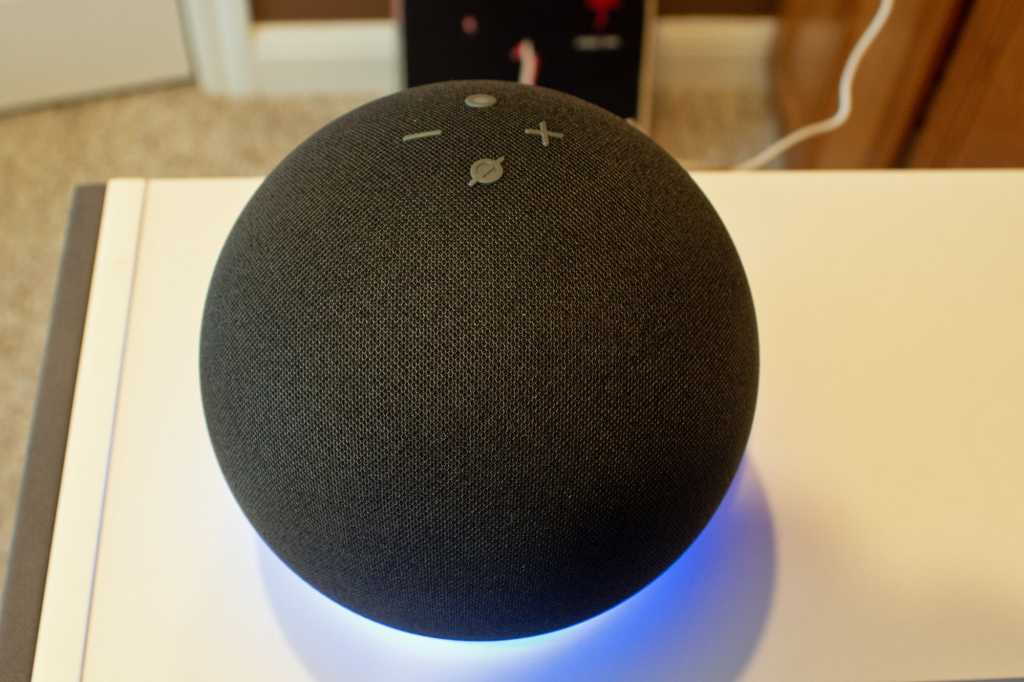 Smart speakers are achieving higher fidelity, and Amazon’s fourth-generation Echo is no exception. But it’s better as a smart home hub than as a musical performer.

The fourth generation of Amazon’s Echo smart speaker marks a radical departure in industrial design, ditching the familiar columnar form factor of previous iterations for something that looks for all the world like a child’s bowling ball. Two things haven’t changed: The Echo (and Alexa) remain our favorite tools for smart home control, and the company still trails Sonos in terms of building smart speakers that sound great. The recent introduction of the Nest Audio leaves Amazon in third place behind Google in terms of audio performance (don’t forget the powerful Google Home Max).

Amazon continues to make strides in terms of audio quality, and the fourth-gen Echo sounds very good, especially if you like your tunes leavened with bass. But in a three-way comparison with the Nest Audio and the Sonos One (which, I should note, costs twice as much as either of its competitors), the Echo comes up just a wee bit short, as I’ll discuss a bit later. But Amazon further strengthened its smart home bona fides by building a Zigbee radio into this Echo, so you no longer need to step up to a “Plus” model to get a true smart home hub. The new Echo has an onboard temperature sensor, too.

This review is part of TechHive’s coverage of the best smart speakers, where you’ll find reviews of competing products, plus a buyer’s guide to the features you should consider when shopping for this type of product.

In fact, Amazon sent an Ecolink door/window sensor and a Philips Hue White and Color Ambiance smart bulb along with the speaker for this review. And in less than 15 minutes, I had paired these Zigbee products to the Echo and created a routine in the Alexa app that turned the smart bulb on and tuned it to a warm white when I separated the two pieces of the sensor (simulating a door opening by breaking the magnetic field between the two parts). If you’re a smart home first-timer, you won’t find anything easier. You should be aware, however, that if you want to take full advantage of all the features that come with Philips Hue smart lighting products, you’ll still want to buy a Philips Hue Bridge.

I continue to wish that Amazon would go all the way on the smart home front and build both Zigbee and Z-Wave radios into the Echo, just to cover all the bases. Amazon-owned Ring does just that with its Ring Alarm system. The new Echo also has a Bluetooth Low Energy radio onboard (you can connect up to 10 Philips Hue Bluetooth/Zigbee bulbs without fiddling with Zigbee at all, if you so choose), and Amazon would want me to point out that its new Echo smart home hub also supports its new Sidewalk “neighborhood” network. Amazon says “starting later this year,” buyers will be able to use this Echo as a Sidewalk Bridge to help compatible devices connect and reconnect to their router, as well as to set up new Echo devices and Ring Smart Lighting products.

And while Google is backing out of its own home-security effort—investing in ADT, but then withdrawing its own Nest Secure product from the market—Amazon has introduced Alexa Guard and Guard Plus. With the free version of this service, you can tell Alexa you’re leaving—“Alexa, I’m leaving,” and the Echo will begin listening for smoke alarms, carbon monoxide alarms, and breaking glass. If it picks up any of those sounds, Alexa will send a notification to your smartphone. You can also program the Echo to automatically turn connected smart lights on and off while you’re away, to provide the illusion that someone is home. Guard also works with security systems from Ring and ADT.

Amazon has also announced the upgraded subscription-based Guard Plus that will listen for the sound of footsteps and doors closing—noises that shouldn’t be happening in an unoccupied home—and enlist outdoor security cameras to monitor movement outside the house. In addition to sending you an alert, Guard Plus will sound a siren on the Echo’s speaker and you’ll have the option of contacting a live agent to get help in an emergency (just say “Alexa, call for help”). Amazon says it will charge $4.99 per month or $49 per year for Guard Plus.

I suspect the new Echo’s spherical design will be polarizing. I’ve had the speaker for four days and still haven’t decided I like it, although I do like having the LED light ring on the bottom of the speaker, where it casts a glow on whatever surface it’s resting on. The speaker is larger than it looks in pictures, measuring 5.7 x 5.7 x 5.2 inches  (WxDxH) and weighing a hefty 34.2 ounces, I could barely keep a one-handed grip on its slippery fabric covering and nearly dropped it while moving it from one spot to another. Amazon sent a “charcoal” version of the speaker for this review. You can also choose between “glacier white” and “twilight blue.”

Four tightly grouped buttons on the top of the ball control volume up/down, electronically disable the microphones, and perform actions (e.g., summon Alexa without saying the wake word, turn off an alarm, and so on). The LED light ring at the bottom of the speaker grows or shrinks as you adjust the volume, and the ring turns red when the mic is disabled (an LED behind the button itself also glows red). Even though I’ve never used it, I appreciate that Amazon includes a 3.5mm jack next to the Echo’s power connection that can be configured as either an audio input (so you can play music from a source that doesn’t have Bluetooth) or as an audio output (so you can send music to a higher-fidelity speaker or audio system that doesn’t support Bluetooth).

The fourth-gen Echo sounds very good for a $100 speaker, but the competition is fierce and Google has a better $100 speaker in the Nest Audio. The Sonos One is even better than that; but again, it also costs twice as much. Personally, I want the best of both worlds, so I use Sonos speakers for multi-room audio and Amazon Echoes for controlling my smart home—with one exception: I use a Sonos Move for both tasks when I’m out in the yard.

The new Echo had no problem filling my 13×19-foot home theater with distortion-free sound. And as I hinted earlier, Amazon’s latest speaker overemphasizes bass, but it comes by it honestly. The speaker has three drivers inside its enclosure: Dual 0.8-inch tweeters and one 3-inch woofer, a combo Amazon says delivers stereo sound (I had difficulty discerning a distinct left and right sound stage).

A cropped cutaway illustration in the reviewer’s guide shows the tweeters facing forward, but pointing very slightly to the left and right and tipped up to a minor degree. That honkin’ woofer points nearly straight up, but is tilted far enough toward the front of the enclosure that its sound waves don’t emerge from the very top of the speaker. I wish I could tell you what materials these drivers are fabricated from and what types of amplifiers are driving them, but Amazon declined to provide those details.

Amazon did say in its reviewer’s guide that “a sphere also has the lowest possible surface area to volume ratio, so it provides greater back volume for fuller and deeper bass.” That I can believe. This new Echo puts out a lot of bass, but listening to “Rolling On,” from the Mark Knopfler, Emmylou Harris album All the Road Running, the bass lines sounded just a bit bloated, while instruments in the middle of the frequency range—such as the fiddle—got lost in the mix. I had a similar experience with the Steely Dan track “Jack of Speed,” from the band’s Two Against Nature album. The bass was way forward in the mix, but the crack of the drummer’s snare drum was barely perceptible.

In comparison, the Sonos One and the Nest Audio deliver higher-fidelity audio performances, but without nearly as much low-end oomph (Sonos offers the option of a subwoofer—and so does Amazon, not that you need one with this speaker; Google does not). If you like boom in the room, you’ll enjoy Amazon’s offering. And if you’re looking for a speaker to provide background music, versus something you’ll use for critical listening sessions, this fourth-generation Echo is sure to float your boat. Speaking of floating, Amazon even thought to include a threaded mount on the bottom of the speaker, so you can mount it to stand or hang it on the wall (you’ll have to deal with the dangling power cord, though).

The Amazon Echo (4th Gen) is a pretty good audio performer, but it’s a great smart speaker that’s also equipped with a Zigbee radio. I’m taking a wait-and-see approach to Amazon’s Sidewalk network for now. It sounds promising, but there’s nothing tangible in the real world to judge it by. In other words, don’t buy this speaker in the name of future-proofing your smart home—it’s just too early. Zigbee, on the other hand, is tried-and-true tech that will be here for the long haul. Adding support for Z-Wave (are you listening, Amazon?) would be icing on the cake. Oh well, maybe next year.