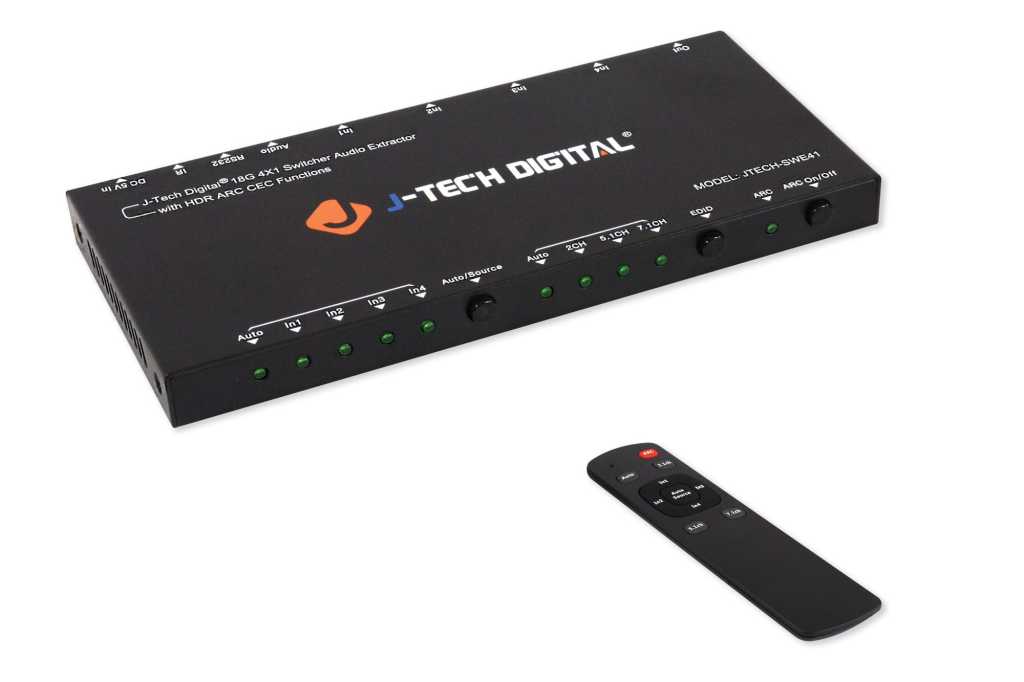 Image: J-Tech Digital
At a Glance

You can call it J-Tech Digital, or you can call it Monoprice Blackbird…. Under either name, this is a fine four-input/one-output HDMI switcher for your entertainment center.

Soundbars with one or a just few HDMI inputs supplanting A/V receivers with six or more HDMI inputs was supposed to simplify our home entertainment systems, but many of us have discovered that we have too many video sources—set-top boxes, streamers, gaming consoles, Blu-ray players, and so on—and not enough HDMI inputs to handle everything. The solution? An HDMI switcher and audio extractor. We recently found one such device marketed under two brands: J-Tech Digital and Monoprice.

It’s apparent that neither J-Tech nor Monoprice actually builds these devices, but sources them from some other manufacturer, because they’re identical apart from the labeling. We thoroughly tested both the J-Tech Digital JTECH-SWE41 and the Monoprice Blackbird 4K 4×1 HDMI Switch (P/N 39666) and found that each delivered solid performance with four HDMI inputs and one HDMI output. We put J-Tech in the headline because as of this writing, it was selling for $25 less than Monoprice’s device, which you can purchase here. Since they’re essentially the same device, we’ll refer to them in this review in the singular.

The source you select with the button in front is then output to the switcher’s single HDMI-ARC output to one of your TV’s, soundbar’s, or A/V receiver’s HDMI input—with no noticeable degradation in picture or sound quality provided you use certified Premium High Speed HDMI cables to make the connections.

Offering current top-of-the-class specs, this mighty mite can process and push through razor-sharp signals with up to 4K resolution at a 60Hz refresh rate (so it might not be the best choice for the next generation of videogame consoles, which support refresh rates up to 120Hz. It doesn’t support FreeSync or G-Sync, either). The switch otherwise abides by the HDMI 2.0a standard and HDCP 2.2 digital copy-protection standards necessary for enhancing 4K images with high dynamic range processing like HDR10 and Dolby Vision—the latter stunningly shown when I plugged in the latest Roku Ultra media streamer into switch input 4. A most realistic aquarium materialized on my 4K LG OLED, a screen saver that gave away its true nature only when the Dolby Vision logo fleetingly floated in the corner.

On the audio side, high-quality soundtracks encoded in 2.1-, 5.1-, and 7.1-channel PCM, Dolby TrueHD, Dolby Atmos, and DTS-HD Master Audio pass unimpeded to and through the switch box’s HDMI output jack, as a J-Tech Digital engineer who’d QC’d the box at the brand’s Sugarland, Texas headquarters testified.

But wait, there’s more. The inclusion of an audio signal extractor renders this high-striving box even more useful—essential, even, for TV viewers who’ve paired it with a high-quality (but input short) display and soundbar.

Here’s how it comes together. Connect your four most essential devices to the switch: set-top box, media streamer, game console (or laptop), and Blu-ray player. Next, connect the switch’s HDMI output to your TV set’s HDMI input—the one labeled HDMI ARC, if available. Alternatively, you could plug that cable into an HDMI port on a soundbar or A/V receiver that will amplify and send the audio content to its speakers and pass the video signal to your TV.

Yes, you will experience a downgrade in stereo or surround-sound processing, because analog connections are stereo only, and Toslink doesn’t provide the bandwidth needed for Dolby TrueHD and the other lossless home-theater codecs. But when I used Toslink connections with a Sonos Playbar and then Bose Soundbar 500 (both paired with their respective wireless subwoofers) the resultant sound proved quite robust, detailed and reasonably in sync.

For me, the features that seals the deal on this particular switch box is its smarter infrared remote control setup, which eliminates user frustration and adds flexibility when you integrate it into your entertainment center.

Any HDMI switcher worth its salt will augment its front-panel operation buttons with a wireless remote control, with an IR signal receiver mounted on its face. I’ve tried seven or eight other switchers, and all too often, their wireless control isn’t reliable. You must be sitting directly in front of the switch box, and the box itself can’t be blocked by a door or any other equipment. Most of their remotes have weak signal emitters, and their IR receivers typically have very narrow fields of view—you can’t be more than 30 degrees off-axis and expect them to work.

I had no such complaints with this box. Instead of its IR signal receiver being on the front panel, it’s tethered to a 5-foot cable that plugs into the back. You can place the box anywhere you’d like, and with a dab of double-sided tape (supplied), you can mount the receiver in any exposed location the cable will reach. Should the supplied cable not be long enough, you can plug it into an extension. I found a 12-footer on Amazon selling for about $9. It added maybe a millisecond of delay to the 3- to 5-second input-switching process. The manufacturer offers the same cable in 6-, 25-, 50- and even 75-foot lengths, but I didn’t test those.

J-Tech Digital and Monoprice both bundle the same simple but easy-to-use remote with their boxes. The HDMI input buttons are placed in the four corners of a square, with the select button in the center. This makes the remote easy to use, even in the dark. Pressing the red ARC button at the top right of the remote sends the audio content from your smart TV’s tuner, onboard media streamer, or any other HDMI source back down the HDMI cable plugged into its HDMI ARC port to the switch box. From there, the sound goes to your soundbar or A/V receiver. It’s almost like having a fifth HDMI input on the switch.

Set-up tip: If you’ve never used your TV’s ARC function, it might have left the factory in a disabled state. Go into the TV’s audio settings and activate it. While you’re there, try activating its CEC (consumer electronics control) function, which might then let you use one remote to control all the devices connected to and through this switch box.

If you want even more control, take advantage of this switch box’s RS-232 port for custom integration operations, plus “available now or coming soon” compatibility with programmable Harmony remote controls, according to Monoprice tech support.

But I don’t have much faith in this device’s automatic input-shifting (a feature touted in most every HDMI switch), because I didn’t find it to be reliable. In theory, the switch box will sense and automatically change the HDMI source whenever you newly power on another connected device. Gamers say it works well when they’re shifting their attention from one connected console (or computer) to another, but it failed to wake and respond when I turned on a DirecTV satellite TV receiver or a Blu-ray player, probably because of the conflicting messages the switcher also was getting from connected streaming boxes. Even in standby mode, the latter are always kinda on, downloading content and putting out a screen-saver image.

The bottom line—and a cautionary note

To be honest, HDMI switch boxes have a reputation for going south, failing in whole or part, after a few months or a couple of years. A cottage industry of Chinese suppliers crank these things out, with good intentions but perhaps not a lot of experience. Their job is made harder by evolving standards and manufacturers taking different paths when implementing them. I put that out there because I can’t guarantee how long this current choice for best HDMI switch box will endure, nor will I vow it will work great with all the video products you might want to connect.

That said, I’ve successfully mated both the J-Tech and Monoprice devices with older Panasonic and Pioneer plasma TVs, an ancient but beloved Philips LCD TV with Ambilight (look it up), as well as a very revealing 4K Epson Home Cinema 4000 video projector. I also tried a variety of streaming boxes (Amazon Fire TV, Apple TV, Roku), disc players, DirecTV, and two videogame systems (a PlayStation 4 and a Nintendo Switch, the latter of which has been problematic with other switches I’ve tried). Finally, I tried them both with 4K-ready Yamaha, Sony, and Bose audio systems without a hitch.

Your setup and experience could still differ. Marathon gamers might heat these things to the brink and should probably connect their systems directly to a display. Also, don’t forget to use certified Premium High Speed HDMI cables everywhere, because these switches are only as capable and stable as their weakest link. If you encounter a purple-tinted picture now and again, simply shifting inputs around again usually fixes the HDMI security handshake that’s responsible for the problem.

On the upside, I own a different J-Tech HDMI switch that has operated flawlessly for the year and a half, so I have some confidence in the brand. Monoprice, for its part, typically chooses its suppliers wisely and has a good reputation for quality control. Both brands have operations in the U.S., including tech support, and both companies provide at least one-year warranties on these devices—18 months from J-Tech if you register your purchase promptly.