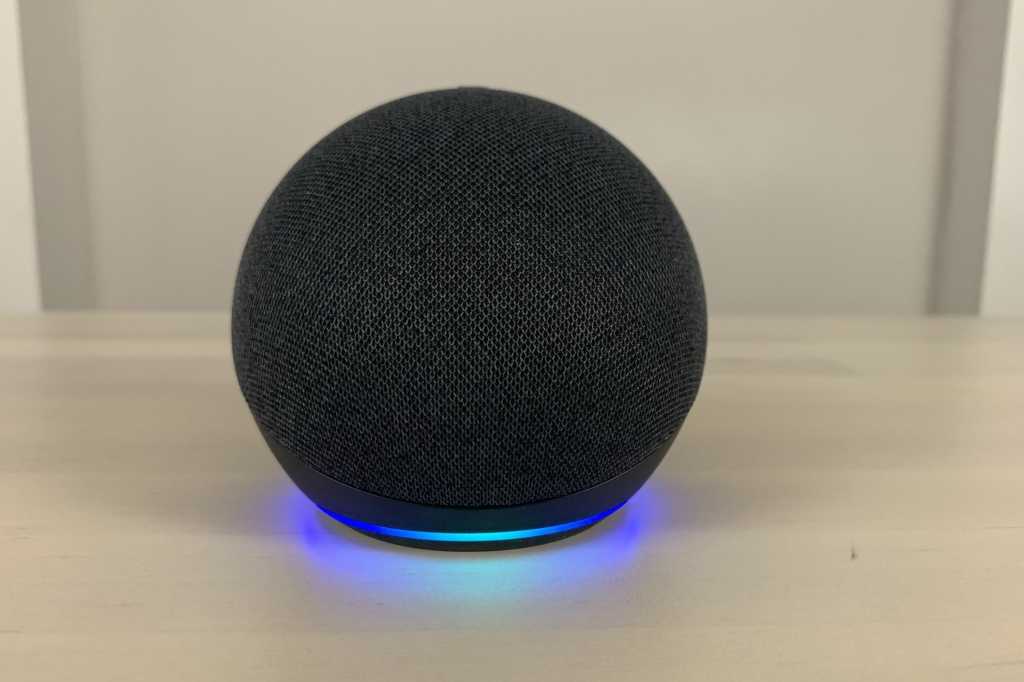 The revamped, fourth-generation Echo Dot has arrived, and it comes with a spherical design that sets it well apart from its smaller, flatter predecessors.

The revamped, fourth-generation Echo Dot has arrived, and it comes with a spherical design that sets it well apart from its smaller, flatter predecessors. But while it boasts an all-new look, the latest Echo Dot is essentially the same speaker as the (now steeply discounted) third-gen Dot, complete with onboard Alexa, stellar smart home capabilities, impressive communication features, and the ability to keep an ear on your home via Alexa Guard. And while we’re pleased with how the new Dot sounds, its front-firing driver doesn’t deliver a quantum leap over the older Dot’s audio quality. So yes, the fourth-gen Echo Dot is technically the best Dot yet, but only by a narrow margin.

Available in charcoal, glacier white, and twilight blue flavors, the fourth-gen Echo Dot marks a major departure in terms of the speaker’s look and feel.

Instead of the hockey-puck design of the three previous Echo Dots, the new Dot has a taller, spherical shell, same as with the new EchoRemove non-product link and the Dot’s sibling, the refreshed Echo Dot with clockRemove non-product link. While it has the same 3.9-inch width of the previous Echo, the fourth-gen, 3.5-inch Echo Dot is nearly two inches taller, making it considerably bigger than its predecessor and roughly the size of a softball. Indeed, the new Dot looks like it was designed to be shown off rather than tucked away.

The revamped Dot does share the older model’s fabric exterior, with the fabric on the new Dot covering about two thirds of the speaker, leaving a bare wedge in the rear.

Besides its new shell, the fourth-gen Echo Dot moves Alexa’s light rings from the top of the speaker down to its base, casting a nifty-looking glow on the surface upon which it’s sitting.

As with previous Echo Dots, the new Dot is outfitted with volume up/down, mic mute, and action buttons that peek out from the fabric at the top of the speaker, although the buttons are now more tightly grouped together than they were on previous Dots.

When you tap the volume buttons, a white ring appears, and it either grows or shrinks in length depending on whether you’re adjusting the volume up or down. Pressing the mic mute button makes the Alexa ring glow red, indicating that Alexa isn’t listening to your conversation. Pressing the “action” button wakes Alexa, or it can silence an alarm or reset the speaker if you press and hold it for 25 seconds. But since you can wake Alexa with your voice or ask her to snooze an alarm, most Dot users (myself included) never bother with the action button.

Speaking of snoozing alarms, the new Dot comes with a new “tap to snooze” gesture, which actually first appeared on the first-gen Echo Dot with clock. The gesture does exactly as it says: just tap the top of the speaker with more than one finger (you don’t have to press a specific button) to snooze an alarm for nine minutes, handy for getting more shut-eye without rousing yourself for an Alexa chat.

On the back of the fourth-gen Dot, you’ll find a 3.5mm audio jack for connecting a wired speaker, a feature that’s conspicuously missing from Google’s equivalent Nest Mini smart speaker. There’s also a barrel-shaped power port for connecting the Dot’s five-foot power cord, which (same as the older Dot) terminates in a chunky, outlet-blocking 15-watt power supply.

My Echo Dot review unit came pre-paired with my Amazon account (an option that you can request while ordering the speaker on Amazon.com), which made the setup process ridiculously easy. After plugging in the Dot, I fired up the Alexa mobile app and was immediately greeting up a pop-up that read, “Echo Dot can be set up.” I pressed Continue, selected my Wi-Fi network (I didn’t need to enter my password, since I’d done than for previous Echo installations), and a few seconds later, boom—the Dot was connected and ready to go.

If you’re new to Echo speakers and Alexa in general, the setup process is only slightly more involved. After you’ve powered up the Dot, installed the Alexa app and signed in with your Amazon account, you just tap More > Add a Device > Amazon Echo. Once the Alexa app has discovered the speaker, it’ll step you through the process of adding it to your home Wi-Fi network, and then it will help you add the Dot to a room (such as Master Bedroom, Kitchen, Office, etc.) and verify the street address where you’ll be using it (for such purposes as giving you local weather conditions and driving directions).

The Echo Dot’s killer feature is Alexa, and those who are already familiar with Echo speakers know what to expect. Chatty, intuitive, and ever friendly, Alexa can field a dizzying number of questions and requests, from giving you weather reports and settings timers and alarms to ticking off your schedule and even telling jokes. In my tests on the Echo Dot, Alexa responded to my queries almost instantly, although the same could be said of the previous Dot.

Besides answering questions and doling out weather reports, Alexa excels when it comes to controlling smart home devices. At last count, more than 100,000 smart devices are compatible with Alexa, and you can devise multi-step “routines” that include your smart lights, security cameras, smart locks, and more. For example, I have a routine that dims my downstairs lights, turns on my TV and powers on my A/V receiver when I say “Alexa, popcorn,” or I can say “Alexa, good night” to douse my bedroom light and tee up a sleep-inducing playlist.

Of course, asking Alexa to turn the lights on won’t do you much good if there isn’t an Echo speaker nearby, but that’s the beauty of the Echo Dot’s budget price tag. At just $50 (and we can expect steep discounts come Black Friday), putting a Dot in every room of your house isn’t out of the question.

One more great smart feature that the Dot supports is Alexa Guard, which will send an alert to your phone if Alexa hears a smoke alarm or breaking glass while you’re away. If you wish, you can upgrade to the upcoming, $5-a-month Alexa Guard Plus service, which adds footsteps and opening doors to the sounds Alexa can keep an ear out for, and you can also say “Alexa, call for help” to have Alexa connect you with an emergency-response agent.

If you have multiple Echo speakers in your home, you can ask Alexa on your Echo Dot to “drop in” on another Echo speaker, meaning you can listen in on the room (a green Alexa on the other end notifies anyone nearby that a “drop in” call is in progress) and talk to anyone who’s around. To trigger an announcement on all your Echo speakers at once, just tap Announce on the Alexa app and either say or type in a message (“Time for dinner!”).

Besides making calls to other Echo speakers in your house, the Alexa on the Echo Dot can also call landlines, and any calls placed to numbers in the U.S., Canada, or Mexico are free. Even better, Amazon recently announced that AT&T subscribers can now assign their cell phone numbers to Alexa, which means Alexa can answer your incoming calls.

From one generation to the next, the Amazon Echo Dot has been gradually improving its once-awful audio quality, and the new Dot continues the forward progress, if only marginally.

While the fourth-gen Echo Dot’s 1.6-inch mono driver is the same size as that of the previous model, the cone in the new Dot is forward-firing rather than up-firing. Amazon didn’t provide any details about the Echo Dot’s speaker amplifier, although given that both the latest-gen Dot and its predecessor come with 15-watt power supplies, it’s doubtful that the newer speaker got much of an amplifier boost.

In any event, the latest Echo Dot did sound a tad clearer and fuller than the third-gen Dot, which (to my ears) sounded both thinner and overly boomy. Listening to the title track of Bruce Springsteen’s The Ghost of Tom Joad, the newer Echo Dot did a surprisingly good job conveying The Boss’s unadorned vocals and his reedy harmonica, and I couldn’t detect any distortion even when I cranked the volume. In short, the fourth-gen Echo Dot sounds better than any $50 smart speaker I’ve ever tested, although its audio pales compared to (for example) the $100 Google Nest Audio and the $200 Amazon Echo Studio.

Of course, you can always boost the Echo Dot’s sound by using it with a second Dot as a stereo pair, and/or by pairing it with an Echo Sub. Another option would be to bypass the Echo Dot’s driver in favor of a wired or Bluetooth speaker, or you can designate a preferred speaker, such as another Echo or a supported Wi-Fi speaker.

You can link Alexa with a variety of music services, including Amazon Music, iHeartRadio, TuneIn, Deezer, and Tidal, and as with other Echo speakers, the Echo Dot counts as a Spotify Connect device. Missing from the list of support music services is (no surprise) Apple Music and YouTube Music.

The Echo Dot stacks up more or less evenly with Google’s competing budget smart speaker, the Nest Mini. They’re both small (although the Nest Mini is more on a par with the older Dot and its hockey-puck aesthetic), they’re both $49 (although the Nest Mini is currently selling on the Google store for just $29 to undercut the third-gen Echo Dot, currently listed on Amazon for $39.99, though it won’t be in stock until December 6), they’re both powered by top-notch voice assistants that can handle smart home duties (although Alexa is compatible with roughly twice as many smart devices as Google Assistant), and they both boast reasonably decent audio quality as far as pint-sized smart speakers go.

The deciding factor between the Echo Dot and the Google Nest Mini is which voice assistant you’d rather pledge your loyalty to. If you’re going the Alexa way, then you would be best off going all-in with the Alexa and Echo ecosystem. If you’re more partial to Google Assistant, stick with Google Assistant-powered speakers and smart displays. Take it from me, mixing and matching voice assistants in your home is a recipe for endless confusion, not to mention a thicket of frustrating compatibility issues.

There’s no question that the new Echo Dot is better than the third-gen Dot it’s replacing, but is it a lot better? Hmm. Yes, the fourth-gen Echo Dot has slightly better audio quality than its predecessor, but we’re not talking a knockout punch here. And while the latest Dot has the more impressive design, beauty is in the eyes of the beholder, and I’m sure plenty of Alexa users might prefer the older Dot’s more understated look.

Price is also a factor, with the third-generation Echo Dot getting a permanent $10 price cut to $40. The newer $50 Echo Dot will surely see its own discounts as we enter the holiday buying season, but if you’re looking to populate your home with Dots, $40 for the older model is enticing.

In other words, no, there’s no need to trade in your old Echo Dots for the new one, and if you’re looking to save some cash by opting for the cheaper, third-gen Dot, you wouldn’t be missing out on much—that is, unless you really have it in for hockey pucks.